Air Force Veteran Charged with Threatening ‘Death’ for Connecticut Governor: ‘President Trump Knows What You Did . . .’ 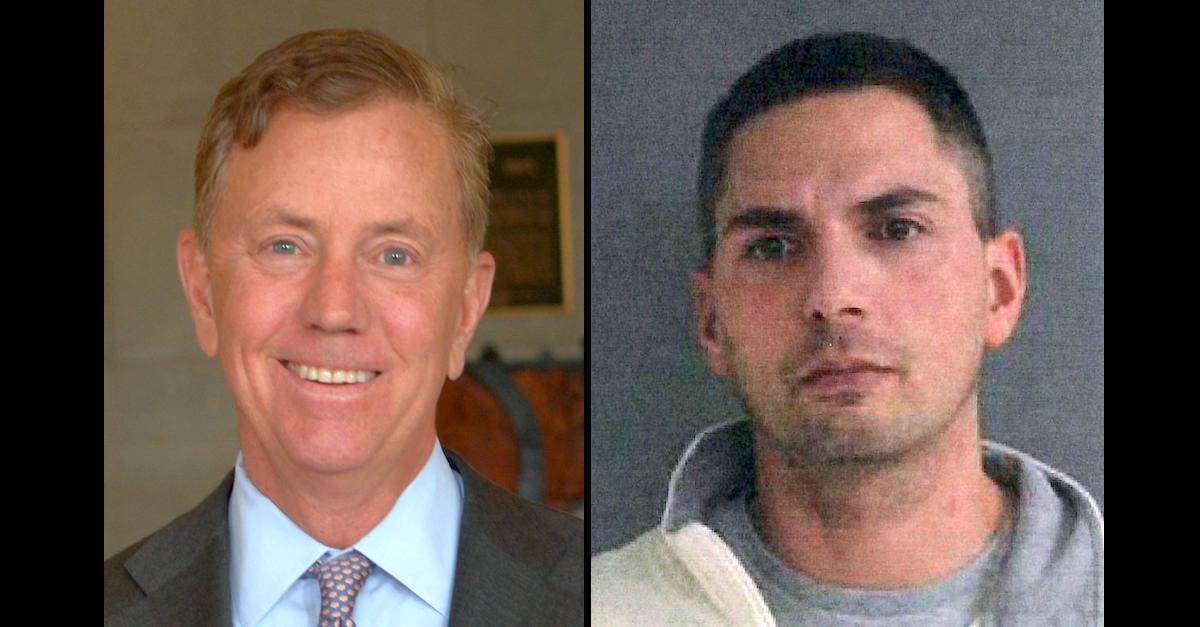 A Connecticut man has been charged with lobbing death threats at Gov. Ned Lamont, a Democrat, on social media.  According to the state police, Jonathan D. Wright, 41, of Waterford, Conn., replied to a Lamont tweet with the the following on Oct. 23:

You are scum living on borrowed time.  President Trump knows what you did to the elderly Covid patients that were sent to nursing homes.  All is known and you will meet your maker courtesy of a noose and a trap door.  Treason = Death.

Additional alleged tweets from Wright contained other content concerning to the state police.

“Where you are going, it’s not going to matter,” the defendant allegedly wrote on Oct. 20.  “Crimes against humanity=DEATH PENALTY.”

You shouldn’t be proud of any of us because we are not proud of you whatsoever.  And we will NOT be happy until Justice is served and you are IN PRISON or take a one-way NUREMBURG CODE trip to Guantanamo Bay.

According to court records, five days after the Oct. 23 tweet, state police detectives were ringing Wright’s doorbell.  The detectives’ narrative reads as follows:

Wright stood in the doorway while he was speaking to us.  I introduced myself to Wright and told him I was conducting an investigation involving postings on the Internet by him.  Wright told me, among other things, that he has only had a “Twitter” account for a while.  Wright said that he did not mean anything threatening when he wrote the “tweet.”  Wright said that he just was angry about what he had heard.  Wright said he heard that government leaders had been putting COVID patients into nursing homes getting elderly people sick.  Wright was angry about that and he said that leaders should be held accountable just like we are if that is true.  I showed Wright a copy of the “tweet” that was written on Oct. 23.  Wright looked at the tweet and said he did write it.  Wright signed and initialed the “tweet” and wrote next to it “I tweeted this out of anger but with no malicious intent.”

In a subsequent written statement referenced in court records, Wright apparently told the Connecticut State Police that he heard former New York Gov. Andrew Cuomo (D) “had resigned in regards to his handling of COVID patients.”  (He didn’t — he resigned in connection with a sexual harassment scandal and to avoid dragging the state through imminent impeachment proceedings related to that scandal.)  Wright also said he was upset “that the nursing homes were making money off the elderly dying from COVID” and that “people were labeled as COVID deaths but were actually not.”  Wright rationed that if “Cuomo was guilty of it then Governor Lamont could be guilty of it as well,” the documents indicate.

“Wright stated that this made him angry and he thought that was not right and he hoped that these people would get a military tribunal,” the state police recounted.

The state police narrative continued with a litany of right-wing talking points by Wright:

Wright is charged with second-degree threatening in violation of Conn. Gen. Stat. § 53a-62.  The law, in relevant part, is a Class A misdemeanor:

(a) A person is guilty of threatening in the second degree when:

“Wright did not have a criminal history and had no guns registered to him,” the state police added.

Read some of the court file below: