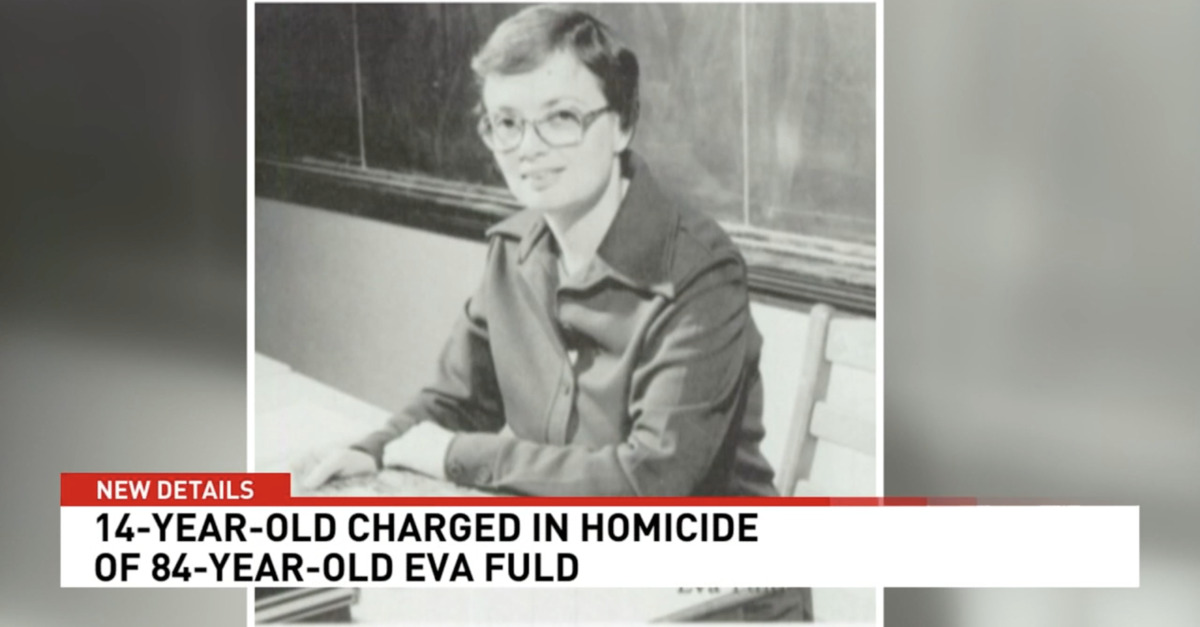 Eva Fuld was 84 years old when someone forced their way inside her apartment and stabbed her to death at least 43 times. Now, the boy accused of her murder is considering taking a plea deal.

In April of this year, Jahkim Robinson, 14, was indicted by an Onondaga County grand jury in Upstate New York for the January robbery gone awry that left Fuld dead. In the indictment, prosecutors accused the defendant of “stabbing or cutting the victim 43 separate times, causing injuries to her torso and extremities, resulting in her death.” The accused minor lived two doors down from his alleged victim and was allegedly part of a group that beat and stabbed the retired French teacher before stealing several of her belongings.

Robinson, however, is currently believed to be the sole murderer included in the group, according to Onondaga County District Attorney William Fitzpatrick.

The crime is believed to have occurred on Jan. 21. But the woman’s body was only discovered on Jan. 25 when police conducted a status check at her Grant Village, N.Y. apartment. The defendant was allegedly found with Fuld’s car keys, vehicle, credit cards, insurance cards, and wallets in his possession when he was arrested.

Both the prosecution and the defense are cabined in their handling of the case by the defendant’s young age. He was initially charged as a youthful offender under the auspices of New York State’s Raise the Age rules that keep violent adolescent offenders away from adult populations and non-violent youth offenders while detained but subject to the same criminal court proceedings as any other given defendant, according to Syracuse.com.

In late July, the boy’s lawyers said they were focused on a defense strategy that would mitigate his likely punishment as opposed to disputing the evidence of his guilt, the outlet reported.

At the time, Robinson’s defense attorney Stuart LaRose reportedly anticipated finishing up the filing of mitigation reports–documents that aim to lower a criminal defendant’s potential range of punishment based on factors such as the nature and circumstances of the offense as well as the defendant’s history and characteristics like age, education and economic status–within “the next several weeks.”

“While Jahkim’s upcoming mitigation report doesn’t prevent him from taking his case to trial on the facts, it does signal that his lawyers are focused on lowering his potential punishment,” journalist Douglass Dowty explained in that late July report.

The case is being overseen by Onondaga County Court Judge Matthew Doran.

During a Monday morning court appearance, the defense and the prosecution reportedly met with the judge to discuss the slow pace of the case and to test the waters for the approval of some sort of mutually-agreed upon disposition. The defendant himself did not attend because of a reported lack of accommodation and he remains incarcerated in the Hillbrook Detention Center.

“No plea offers were made public in court Monday,” according to Syracuse.com. “The case has moved slowly through the official process because lawyers have been working behind-the-scenes on investigating Jahkim’s broken childhood and discussing possible plea scenarios.”

Judge Doran, for his part, ordered the case to move forward in anticipation of trial as discussions proceed. The evidence stage of the case–where each side argues for what will and will not be included in a potential trial–is slated to begin soon.

If convicted of murder, because of his age, Robinson would be eligible for parole within five to nine years.