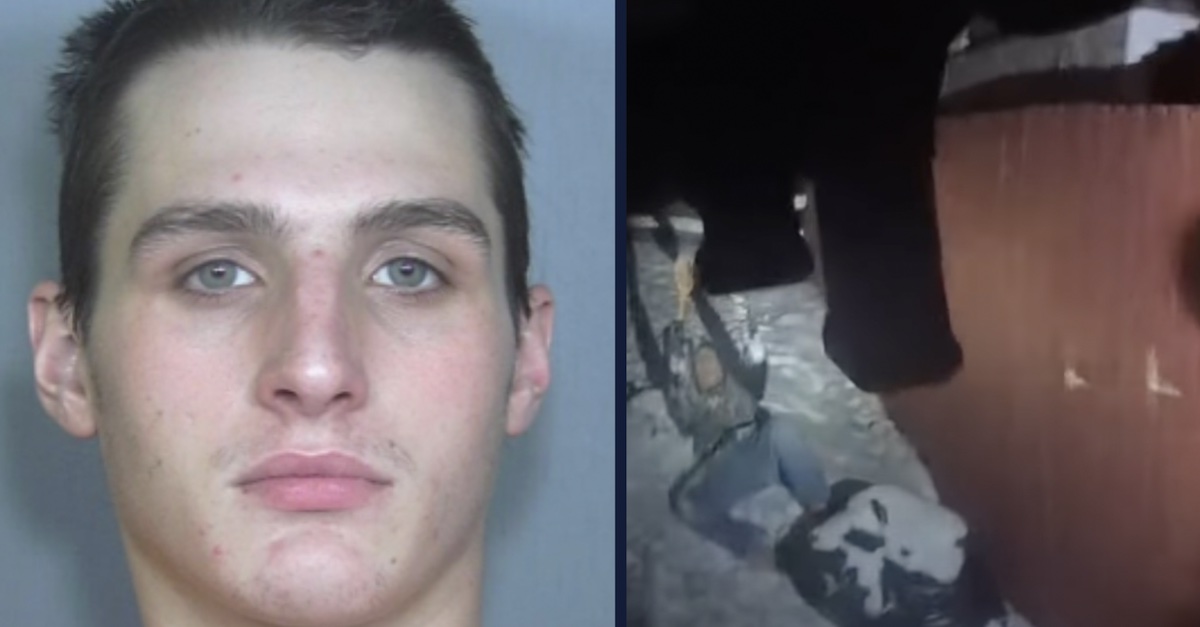 Matthew Cotter, pictured (L) in a mugshot and (R) in a bodycam video surrendering.

A Colorado judge who felt he had to send a message to his community sentenced a 21-year-old man to spend 96 years in state prison for shooting one police officer in the face and trying to shoot another cop during an ambush in December 2019.

The harrowing bodycam video from that night showed officers approaching a home. They were responding to a call about an armed man outside the residence who had allegedly texted his ex-girlfriend: “It’s too late.” The caller said Cotter threatened violence against his ex and expressed that he would take his own life.

Moments later, gunshots rang out, and Sgt. Pelton was hit in the face. He can be seen and heard struggling in the snow.

Another officer asked whether the suspect had any other guns.

Blood was visible on the snow when authorities flipped Cotter onto his stomach.

Cotter was convicted in February of numerous charges, including attempted first-degree murder.

Both Pelton and Sagner survived the ambush and spoke at Cotter’s sentencing about the impact of his crime.

“I’m very fortunate that this was an attempted-murder case and not a murder case,” Sgt. Pelton said, according to the DA’s office press release on the proceedings. “The moment that bullet went through my head, I wasn’t even there going after the defendant. I was there to protect the scene. If someone was going to get shot that day, I’m glad it was me and not one of my young officers.”

“The victimization doesn’t stop with me,” he added. “It affects my whole family.”

Sgt. Sagner, for his part, said that Cotter deserved nothing less than the maximum punishment.

“It was not an accident,” he said. “He knew what he was doing. I believe Mr. Cotter is where he needs to be.”

An affidavit reportedly said that Cotter even “detailed how he focused on his gunsights when aiming at the officer.” Investigators said the chilling admission came during a voluntary interview.

The judge in the case, believing a message needed to be sent, pointed out how difficult it was to watch the video of Sgt. Pelton getting shot. Judge Vigil appeared to be particularly affected by the “horrible” gurgling noise the victim made.

“This is really a unique situation,” Judge Vigil said, according to the DA’s office. “While I was not there, I saw the videos. I heard the shots, saw the officer fall, heard just the most horrible gurgle that man omitted. I don’t think I’ve ever heard the gurgle of someone dying. It’s a shock to me that Sergeant Pelton is still alive. It’s only by luck that I even have sentence discretion here and that I’m not forced to impose a life without parole sentence today. I cannot send a message to the community that I love and have been a part of my whole life that this was acceptable behavior.”

The sentencing was handed down during National Police Week, which Attorney General Merrick Garland noted is a week to “pay tribute to the law enforcement officers who sacrificed their lives in service to our country.”

“We remember the courage with which they worked and lived,” Garland said in a statement. “And we recommit ourselves to the mission to which they dedicated their lives. On behalf of a grateful Justice Department and a grateful nation, I extend my sincerest thanks and gratitude to the entire law enforcement community.”

U.S. Attorney Cole Finegan, who heads the U.S. Attorney’s Office for the District of Colorado, similarly stated that “[w]hen a husband, wife, son, daughter, father, or mother puts on the uniform and heads out to protect our community, there are no guarantees they will return home safely.”