‘You Leave!’: Man with Prior Criminal Record Who Fought with Police Inside the U.S. Capitol on Jan. 6 Pleads Guilty to Assault 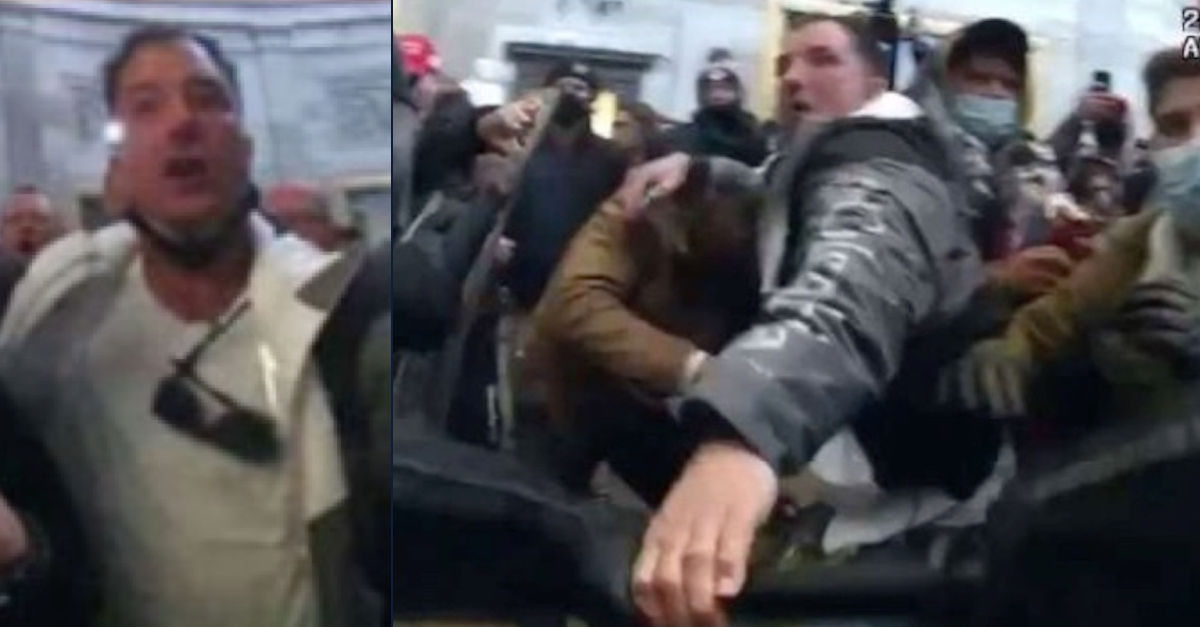 A California man who joined the violent mob at the U.S. Capitol while on parole for another offense and then traveled to Mexico days before his arrest for offenses committed on Jan. 6 has pleaded guilty to a felony.

James Burton McGrew, 40, pleaded guilty Friday to one count of assaulting, resisting, or impeding police officers during the melee at the Capitol. During his plea agreement hearing before Chief U.S. District Judge Beryl Howell, McGrew admitted that after attending then-President Donald Trump‘s so-called “Stop the Steal” rally — in which Trump urged his supporters to march to the Capitol, where Congress was set to certify the results of the 2020 presidential election, and “fight like hell” — he did, indeed, travel from that rally to the West Plaza on Capitol grounds.

Once there, McGrew joined a group of rioters in overwhelming a line of police officers who were trying to hold back the crowd. McGrew admitted to cheering while this was happening and then making his way to the front of the crowd.

He found himself face to face with law enforcement officers, and he admitted to engaging with them before being sprayed with a chemical agent that forced him to fall back.

McGrew, apparently undeterred, made his way to the doors at the Upper West Terrace and started filming the scene.

“Four more years!” he was heard yelling. He was also heard shouting: “Let’s go,” “we need more people,” and “we took this thing.”

He entered the building at around 2:45 p.m. and made his way to the Capitol Rotunda, where he saw police officers trying to corral rioters toward the exit. After witnessing rioters fight with both Capitol Police and Metropolitan Police officers, McGrew yelled at the officers.

“You leave!” he admitted to shouting at them. “This is our house!”

Then, as officers tried to clear the Rotunda, McGrew grabbed a police officer’s baton, wresting it away from the officer briefly before returning it. He shouted to other people in the crowd to lock arms and form a line in order to resist the officers’ efforts to clear the building.

Eventually, McGrew was ejected from the East Rotunda doors, but he didn’t stop there.

At around 4:00 p.m., McGrew arrived at the entrance to the tunnel at the Lower West Terrace. After watching other rioters physically assault officers who were defending the tunnel, McGrew grabbed a piece of a wooden handrail, lifted it over his head, and threw it at the police officers, striking either an officer or the officer’s shield.

“When you threw the handrail at police officers at the tunnel, did you intend to cause them bodily injury?” Howell asked.

At the time of the Capitol attack, McGrew was on parole in connection with criminal state cases in Mississippi. Prosecutors say he took a trip to Mexico from May 23 to 24, just days before his arrest on May 28, despite the fact that it wasn’t clear he had permission to do so.

McGrew faces up to eight years in prison for the assault charge, three years of probation, and a fine of up to $250,000. Under his plea agreement, he will pay $2,000 in restitution toward the estimated $2.7 million in damage to the Capitol.

Howell, a Barack Obama appointee, noted that given McGrew’s criminal history — including felony convictions for shoplifting and auto theft — and the nature of the offense, he is expected to serve between 70 and 80 months behind bars.  That’ means the sentence could fall on either side of the six-year mark.

According to a superseding indictment filed in October, McGrew faced a total of 10 criminal charges, including obstruction of an official proceeding, additional felony assault counts, and multiple misdemeanors. Those charges will be dismissed at sentencing, which Howell set for Aug. 9.