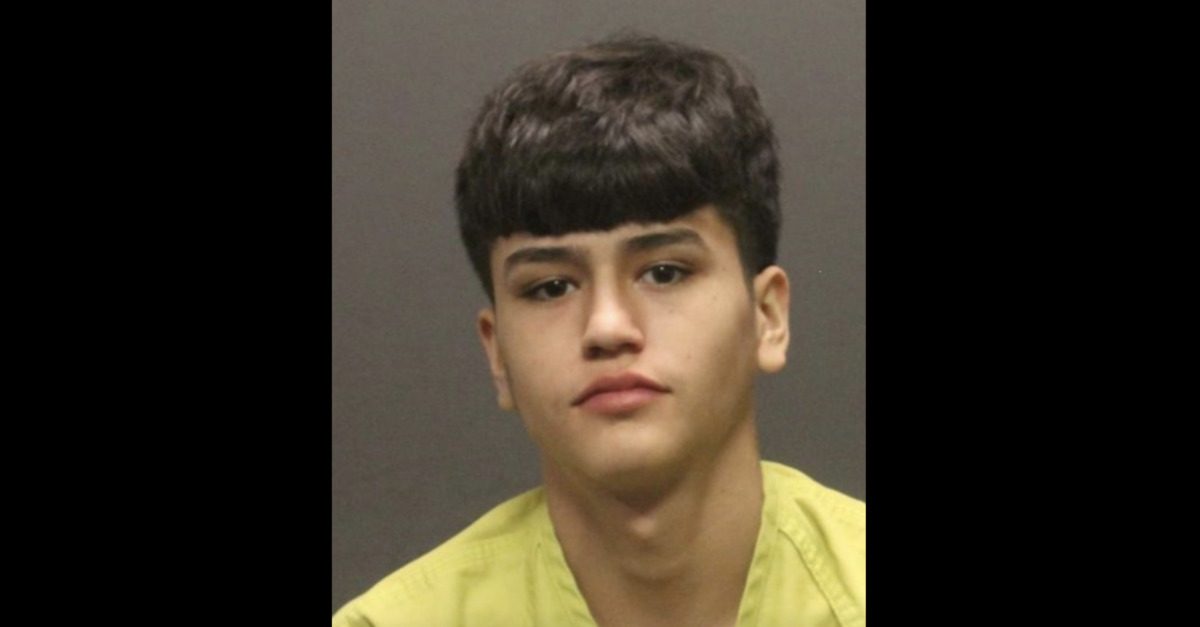 An Arizona teenager was arrested for allegedly shooting a man to death in front of the victim’s two young daughters.

Gabriel Alejandro Pichardo, 16, stands accused of one count of murder in the first degree over the death of 23-year-old Andres Guillermo Franco, according to the Tucson Police Department.

“He was telling me ‘I love you,’ and then the next thing you know: He’s on the floor bleeding to death, and there was nothing I can do,” Daniela Parks, the deceased’s girlfriend told local NBC affiliate KVOA.

Franco was killed on the day he was about to start a brand new job.

“I asked the person to stop because I had kids,” the distraught mother continued in a Wednesday interview. “He just ignored me, walked around, shot him twice more in the back and took off.”

According to local CBS affiliate KOLD, the suspect fled on foot and was pursued by both a K-9 unit and the TPD’s aircraft but was not immediately apprehended. He was taken into custody on Thursday.

Parks went on to say that their daughters are 8 months old and 23 months old. She said they were inside the family’s car and just steps away from the where their father was gunned down in front of them.

“My little girl was crying for almost 48 hours non-stop,” the grieving mother told KVOA. “She cried herself to sleep. She cried when she woke up. She just stopped crying about a couple days ago.”

According to a TPD press release, Pichardo shot Franco in the parking lot of an apartment complex on the afternoon of Nov. 2. Authorities arrived sometime after the violence and found the victim clinging to life. He was rushed to nearby St. Joseph’s Hospital where he succumbed to his injuries was pronounced dead soon after arriving.

According to local ABC affiliate KGUN, witnesses at the apartment complex said a fight immediately preceded the fatal violence on the day in question. The exact contours of that alleged–and disputed–fight have not been made public as of this writing.

According to KOVA, the alleged fight took the form of some sort of “verbal altercation,” citing an initial police report on the incident.

The organizer of a GoFundMe in his honor and for the family’s funeral expenses, however, says there was no fight at all.

“He was shot a total of six times with the last two bullets hitting his body as he jumped in front of his daughters to protect them,” organizer Vanessa Gonzalez wrote. “The news says there was an argument leading to the shooting however that’s not the case at all. He was in the apartment as his wife and daughters (almost 2 years old and 8 month old baby girl) waited for him in the car.. he was heading out to be dropped off at work and someone popped out and started shooting.”

Parks is now left in the position of raising her daughters alone and trying to help the elder girl process the loss of her father.

The single mother addressed the suspect in bitter terms.

“You put a lot of people in pain and you took a really good man and a great father from this world, who did not deserve to go,” Parks said.

The defendant is currently being held at the Pima County Jail/Adult Detention Complex without bond.

Law&Crime reached out to the Tucson Police Department for additional details and comment on this story but no response was immediately forthcoming at the time of publication.

The current year is reportedly the deadliest year for homicides in the history of the city commonly known as The Old Pueblo.