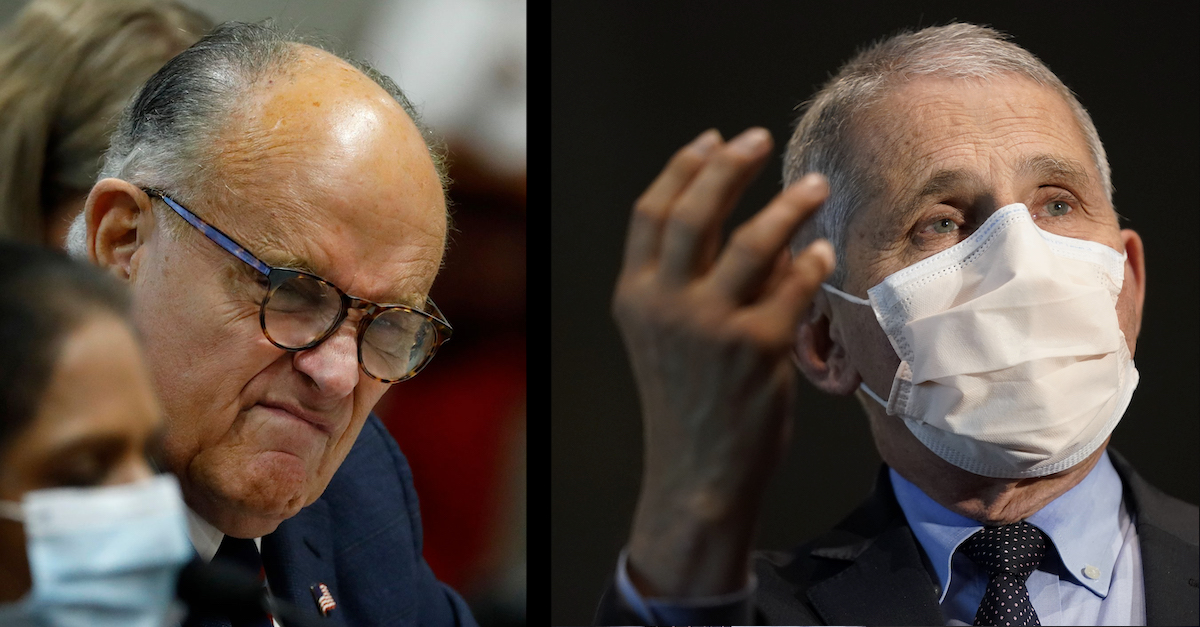 In a rant which included a wild complaint that Americans should have ended the year 2020 with nationalistic anti-Chinese sentiments because of the novel coronavirus pandemic, Rudy Giuliani, President Donald Trump‘s hand-selected attorney, called Dr. Anthony Fauci the “Greek/Roman god of the left wing” who was “wrongly” placed upon a pedestal by the American people.

The comments were part of a broader Giuliani diatribe which suggested the novel coronavirus, COVID-19, was unleashed by China as an attack on American freedom and that Americans failed to rally back with what he believed should have been the appropriate levels of nationalistic and anti-Chinese sentiments.

In the missive, Giuliani said Fauci “foolishly” gave a lab in Wuhan, China “millions of dollars” via an “investment,” but that the American people “don’t recognize” the severity of this alleged error “because they put Dr. Fauci in some category of a Greek or Roman god, god-like character.” Rather, per Giuliani, Fauci should be demonized because “he sure made a big mistake in funding the Wuhan laboratory.”

Fauci has consistently beaten Trump in polls for trustworthiness and job approval, but his approval has dropped among Republicans after incessant attacks like those from Giuliani.

BuzzFeed News previously clarified that the National Institutes of Health provided grant money to an organization called EcoHealth Alliance, which in turn provided money to the Wuhan Institute of Virology after the SARS outbreak in 2003.  “It’s not clear whether Fauci was personally involved in the grants,” BuzzFeed said. Similar grant money went to Shanghai, Beijing, and Singapore in an attempt to study coronaviruses closer to where they originate.

Giuliani mimeographed the Fauci/Wuhan connection as if it were iron clad and without any suggestion that contrary information existed. He has been down this road several times before.

Though Giuliani said Fauci does not deserve to be idolized, he said President Trump does.

In the video, Giuliani said the Democrats ceded to Chinese interests because the “American economy was about the best it’s been possibly forever” under Trump, that the “situation for poor people in America was the best it had been ever,” and that America experienced its “highest rates of unemployment among Blacks and Hispanics” during the year 2020. (In the foregoing, Giuliani apparently meant to say employment, but he didn’t; the context suggests he butchered what he was attempting to convey.) He also said Trump’s numerical victories in these areas of policy were better than Obama’s (and, concomitantly, Joe Biden’s). Giuliani further accused Biden and Barack Obama of helping sponsor terrorism and blamed the Democrats for years of “massive poverty,” which he said he believed were on their way to being solved by Trump, the “billionaire” who stepped down from his lofty perch of privilege to help the masses.

Giuliani also slammed the family of President-elect Biden and the family of former Secretary of State John Kerry as “corrupted” after they “adopted” the “Chinese model” of taking money while the masses suffered. But Giuliani conveniently ignored the Trump family’s connections to China in this bumbling analysis.

Giuliani later opined that George Floyd’s death was likely a “first degree” or “premeditated” murder. He said there were “rightful” protests against the police — which led to looting by people “viciously and horribly attacking the white race.” He also called “the whole name” Black Lives Matter “a contradiction” because BLM doesn’t protest Black on Black crimes. He said the organization was run by three Marxists trained in the overthrow of governments.