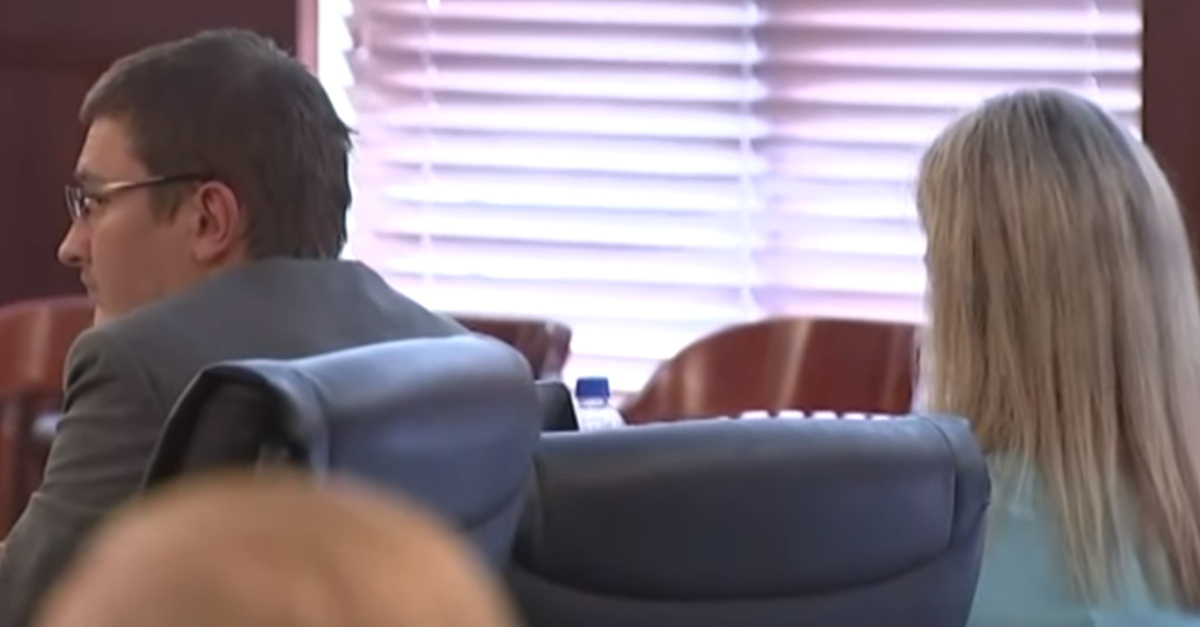 We at Law&Crime have seen our share of lightning-fast deliberations. The murder trial of Jennifer and Joseph Rosenbaum isn’t going to be one of them. Jurors were already two days into making their decision when the judge switched one of them out for an alternate. As a result, jurors have to start all over from the beginning.

#RosenbaumTrial – Now that an alternate has been placed on the deliberating jury, deliberations must start from scratch.

This development stems from something that happened Tuesday. A reporter approached one of the jurors during lunch, and tried to question him.

#RosenbaumTrial – Juror #76 was eating lunch, wearing his badge. A person from the media approached him and asked how far along they were. Media member also said, “I know I’m not supposed to talk to you.”

#RosenbaumTrial – The journalist spoke to the judge and admitted approaching the juror. She told the judge the juror gave her details She asked him if they would come up with a verdict today. He told her they were nowhere near done. He then told her he couldn’t speak to her.

The defense filed for a mistrial on Wednesday. They argued that media outlets have been relaying false information, and that coverage of the case was visible to jurors. They even complained about coverage on the Law&Crime Network.

#RosenbaumTrial – In the defense motion for mistrial, defense attorney says there’s a deputy who has sat both in and out of uniform in the courtroom that has posted encouragement on the Justice for Laila page. pic.twitter.com/yMc3xli9se

#RosenbaumTrial – Also included in the defense motion for mistrial: Defense attorney Corrine Mull says juvenile judge and legal analyst @WillcottAshley commenting on this case on our show is inappropriate.

The state insisted, however, that there’s no indication that jurors saw any of pretrial publicity or anything during the trial. They emphasized that the juror in question self-reported. The juror said nothing substantive was discussed with the reporter.

The judge’s remedy was to remove the juror from deliberations and have him serve as an alternate.

The Rosenbaums are on trial for the alleged murder of their 2-year-old foster daughter Laila Marie Daniel. Their team said the girl choked on a piece of chicken, and sustained a serious, but accidental, injury when Jennifer Rosenbaum attempted resuscitation. Prosecutors argue, however, that the girl clearly sustained injuries all over her body, and that some of these injuries were clearly older in origin. This girl was physically abused and died as a result of this maltreatment, they said.