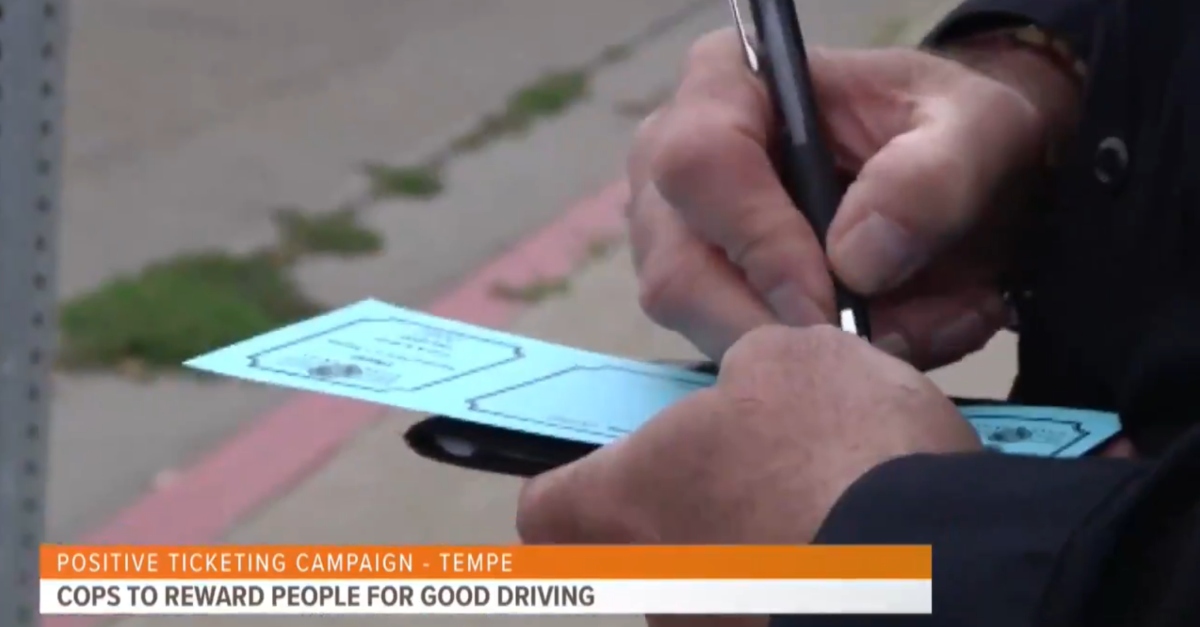 We at Law&Crime love, love, love coupons. Who doesn’t? The freer, the better. It turns out, however, there are circumstances where you might not want one. It was reported Monday that cops in Tempe, Arizona would pull over drivers who were following traffic laws and give them Circle K coupons. The news elicited vociferous opposition, but police spokesman Detective Greg Bacon told Law&Crime in a phone interview that pulling people over was never part of their actual plan.

He said the news was reported before they held their press conference Monday morning to announce their actual initiative. Bacon said he wasn’t sure which outlet reported it first.

As he described it, the idea was for officers, who were out and about, to engage with citizens in conversations about traffic laws. He said that citizens had no obligation to engage.

Officers might be on foot or in their vehicles. As an example, he also brought up school resource officers who would speak to students, or perhaps an officer going into Circle K to buy a drink and chat with customers.

Early news of the initiative was that people would be pulled over for actually following traffic laws.

Today, Police are kicking off a campaign to promote good driving. Officers will be pulling people over who are following traffic laws…but instead of a ticket you’ll get a coupon for a free drink at Circle K-give us your reaction to this new initiative below! #TODAYinAZ pic.twitter.com/sP0AjvHFU7

This elicited substantial opposition. As of Monday afternoon, the post Arizona-based outlet 12News had about 4,100 replies, 233 retweets, and 860 likes. It was, as the kids say, ratioed. Here’s a couple of representative responses.

Keep your fucking 79 cent drink and leave me the fuck alone.

This is such a huge abuse of power. How about just leave me the hell alone. If I’m complying with the law, I don’t want to be pulled over, have my anxiety levels go through the roof, feel humiliated, be late getting to my destination, and then get a cheap coupon as a reward.

“It is illegal for the police to stop you for driving legally,” wrote USA Today D.C. Justice and Investigations editor Brad Heath.

As reported, the initiative landed on a cultural fissure.

“Look at the comments,” wrote activist and academic Dr. Simran Jeet Singh. “Brown and black folks know immediately that this will only cause anxiety for people of color.”

Bacon told Law&Crime, however, that police never planned on pulling anyone over as part of this initiative. Officials understood that they need reasonable suspicion to pull people over, he said.

12News reporter Colleen Sikora followed up on the story, and said the police department’s press statement on the campaign was unclear:

So we’ve been talking about @TempePolice issuing “tickets” for following traffic laws pertaining to bicycles and pedestrians. They’ve clarified they’re not going to physically pull people over. That wasn’t originally clear in their release on the campaign. Release is below: pic.twitter.com/vZLAN5ICsu

Police recently tweeted that they weren’t going to stop anyone–drivers, bicyclists, and others–as part of the campaign.

Positive Ticketing Campaign: the purpose of the event is to positively engage with the public regarding laws pertaining to bicyclist, scooter and pedestrian safety. During this campaign, @TempePolice will not be proactively stopping vehicles, bicycles, scooters or pedestrians.