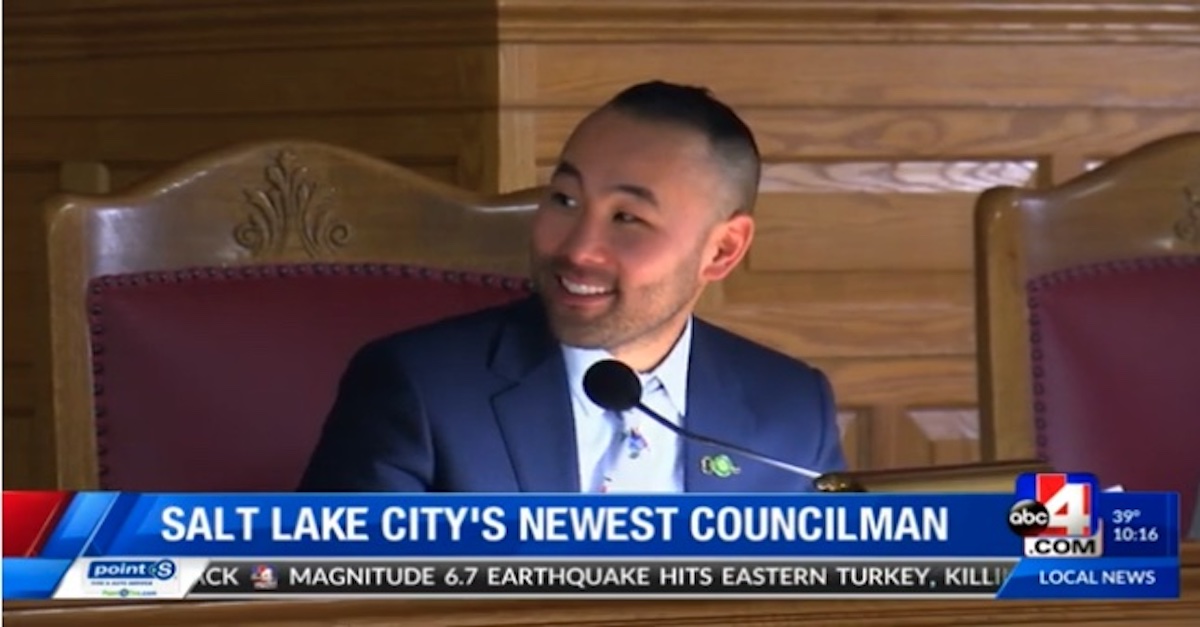 Salt Lake City Councilman Darin Mano learned the hard way that Assistant Attorney General Steve Wuthrich does not take kindly to being woken from his midday snooze, even if it’s by a local politician looking to check in with his constituents during campaign season. After spending Saturday knocking on doors, including Wuthrich’s, Mano received an email letting him know that his visit to Wuthrich was not at all welcome.

“On a nice Saturday afternoon myself and my wife and my downstairs tenant were all taking a lovely siesta when some motherf***g ignorant son-of-**** rang our doorbell and put your piece *** unwanted solicitation in our door waking the dogs and waking us and the neighbors with an uproar,” Wuthrich’s email said. “I will do everything in my power to see you never get elected to any office higher than dog catcher.”

Mano posted the email on Facebook, and said that he felt an obligation to speak out against such language.

“As an Asian American and member of the LGBTQ+ community, I must stand up against hate speech and call it out when I see it,” Mano said. “As a City Councilmember and a candidate running for election, it’s my duty to reach my constituents, listen to what is important to them and make informed decisions.”

“There’s no room for hate in our city,” Mano added.

Although Wuthrich’s email didn’t mention Mano’s race or sexuality, Mano said in a Facebook comment that the email “did feel personal” because his family and heritage are featured prominently in the flyer he left at Wuthrich’s home.

Mano told the Washington Post that he didn’t receive an answer when he knocked on Wuthrich’s door, so he left a flyer and moved on to the next house. According to the Salt Lake Tribune, Mano wasn’t even trying to reach Wuthrich himself, but a different registered voter who lives at the same address.

“The person we were trying to reach was either his wife or his roommate,” Mano said.

Wuthrich has since issued an apology, saying that he “regretted the ferocity and language” of his email.

“My words were uncivil and unprofessional,” Wuthrich said in a statement, according to KSL. “From me personally I apologize to [Mano] and his family. I never wished harm to Mr. Mano, his family, or anyone associated with him. No parent, spouse or child should be subjected to such emotional outbursts. I am deeply sorry.”

Mano was appointed to his city council seat in January 2020 to fill the vacancy left by Salt Lake City Mayor Erin Mendenhall, and this is his first time running for the elected position. He said that while he did see that Wuthrich has a “no soliciting” sign on his door, campaigning is political activity, different from soliciting.

“[C]anvassing isn’t actually a form of solicitation,” Mano said in a comment on his Facebook post. “Political candidates are protected under federal law and free speech, a fact that an Assistant A.G. should be aware of. Regardless, his reaction was inappropriate.”

According to KSL, the Utah Attorney General’s office is considering disciplinary action against Wuthrich. A spokesperson for the AG’s office told Law&Crime that it has no further comment at this time.

Mano’s office did not immediately return Law&Crime’s request for comment.

[Image via screengrab from YouTube/KTVX-TV]