Another attempted entry into the Oregon State Capitol. For reference this happened right before I was assaulted for. pic.twitter.com/72jUyW4AGn

Oregon police announced four arrests as a result of a heated right-wing protest on Monday. They also said they were looking for a man who attacked two journalists.

A number of right-wing protesters were seen entering and attempting to break into the Oregon State Capitol, which was closed during the legislative assembly for normal visiting amid the pandemic.

In a statement, Oregon State Police said that several protesters entered the premises when someone leaving the building opened the door. Protesters stepped into the vestibule area, and were told to leave by troopers.

“As Troopers attempted to keep them from entering the main area of the Capitol, the altercation became physical (pushing),” police said. “A protester sprayed some kind of chemical irritant (mace /OC / bear spray) into the vestibule, Troopers used inert Pepper Balls to keep the crowd back (essentially a paint ball filled with an inert powder) and Salem Police were able to keep the crowd contained in the vestibule.”

According to authorities, protesters were warned that they would be arrested for trespassing if they did not leave.

Police said that at about 10:30 a.m., a man named Ryan Lyles, 41, sprayed bear mace at officers. He was charged with being a felon in possession of a body armor, and unlawful use of mace.

Two other men–Ronald Vanvlack, 75, and Jerry Dyerson, 53–were arrested for a count each of criminal trespass and disorderly conduct, cops said.

State police said that the crowd later tried to gain entry through a door on the west side of the Capitol at about 1:30 p.m. The door window was broken, but protesters did not manage to get in. Jeremiah Pruitt, 35, was arrested for alleged criminal mischief and disorderly conduct, however.

It is unclear if Lyles, Vanvlack, Dyerson, and Pruitt have attorneys in this matter. Police said they were still looking for a fifth man, who was one of the people trying to enter through the west door. Police identified him as Jeremy Roberts, 40, and said he also attacked two reporters. He was not in custody, police said Monday night.

In footage and pictures, the man identified as Roberts was wearing a camo hoodie, featuring an American flag behind an armed, kneeling soldier in silhouette. It read, “This is how Americans take a knee.” 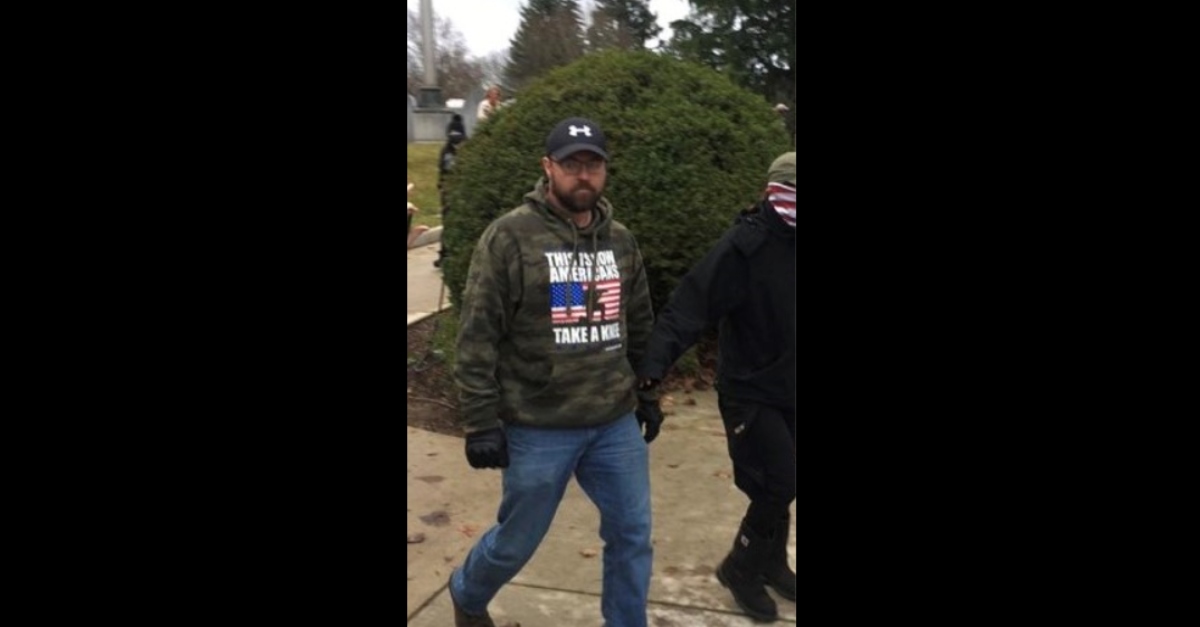 Here is two clips: this man lunges toward me.

Second clip if after I’m tackled, I get up to walk away. pic.twitter.com/ESaa0BJDS1

About 200 protesters were outside the capitol during a special session of the legislature, according to The Salem Reporter.

Journalists on the ground described and showed a raucous turn of events.

It’s going over about as well as you’d expect

“you’re heaving birthday parties while you shut us down!”

It’s important to understand that they rage is real, and that some of it is extremely legit. There’s desperation and fear here because people have no way to survive