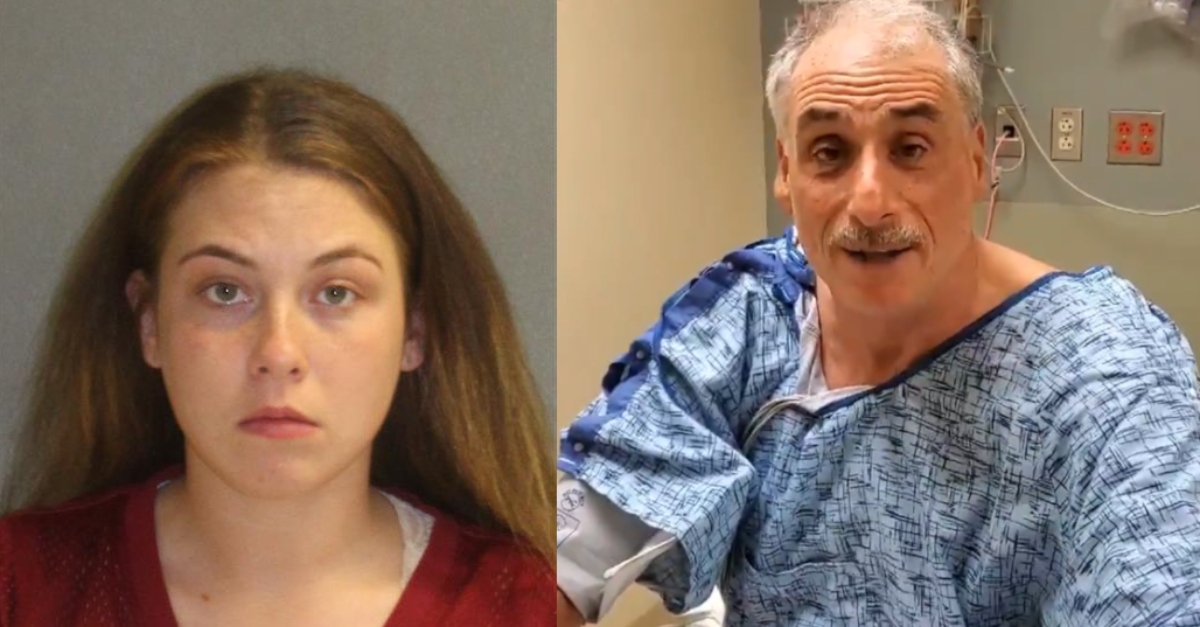 A woman in Volusia County, Florida is accused of striking a local bike rider on Thursday with her car in a hit-and-run incident, but her alleged victim isn’t just anyone: He’s the local sheriff. Defendant Paige Bergman, 20, was arrested Friday, jail records show.

Volusia County Sheriff Mike Chitwood said from a hospital bed that he was out on a bike ride Thursday afternoon.

“Next thing I know, boy, I got hit and hit hard from the rear,” he said. “I go flying off the bike, and all I can tell you was it was a burgundy color car because the mirror was impaled in my back.”

THANK YOU ALL for your well wishes, and thank you to everyone who rushed over here to help. Here’s an update from the ER where they’re taking GREAT care of me. To the hit and run driver- just come forward! pic.twitter.com/oXo1fej7f6

Chitwood credited hospital staffers for taking great care of him. He also praised Allen Ramos, a driver for company Waste Pro who was driving behind the suspect vehicle when it happened, and recorded it from a dash cam. As seen on video, Ramos immediately went to the aid of the downed Chitwood.

Thank you all again for your messages and kind words. I have some road rash, a few stitches on the gash from the passenger side mirror and a fractured fibula that the doctors hope will heal on its own. I consider myself lucky to be back on my feet today. pic.twitter.com/phspkf9LO3

To Allen Ramos, the WastePro truck driver who witnessed the crash, got it on video and pulled over to give me a hand: I will never forget what you did for me. There were several others who pulled over to help, too, and I appreciate each and every one of you.

There was no suspect at the time of the sheriff’s original statement from the hospital bed.

“Hopefully, we’ll catch who the son of a bitch is here in the very near future,” Chitwood said on Thursday.

He published video the next day of authorities finding Bergman. According to the sheriff, the defendant had claimed she was shopping on Amazon when she struck him.

The young lady who hit me is in custody on a charge of leaving the scene of an accident with serious bodily injury. She says she was shopping on Amazon on her phone when she hit me. Please let this be a warning to put your phones down while you’re driving before you kill someone. pic.twitter.com/x1J3pISSk9

Bergman left the Indian Lake Jail on a $2,500 surety bond, records show. Records do not name an attorney in the current matter. Law&Crime reached out to her lawyer in a separate domestic violence battery case from December. She ran up behind her boyfriend and tackled him, according to the redacted affidavit obtained by Law&Crime. The defendant allegedly attacked her boyfriend.

Bergman pleaded not guilty. A hearing is scheduled for April 6.

Chitwood used a crutch when meeting with Ramos on Friday.

This young man had my back when I was knocked down. I’ll never forget it, and I’ll always be grateful for what he did for me! Thank you Allen Ramos of @Waste_Pro_USA pic.twitter.com/fn4Z72RMV5

“My grandkids were really interested in seeing my injuries, so at least I had their full attention for that,” Chitwood wrote on Friday.

You can see the full affidavit for the battery arrest here.