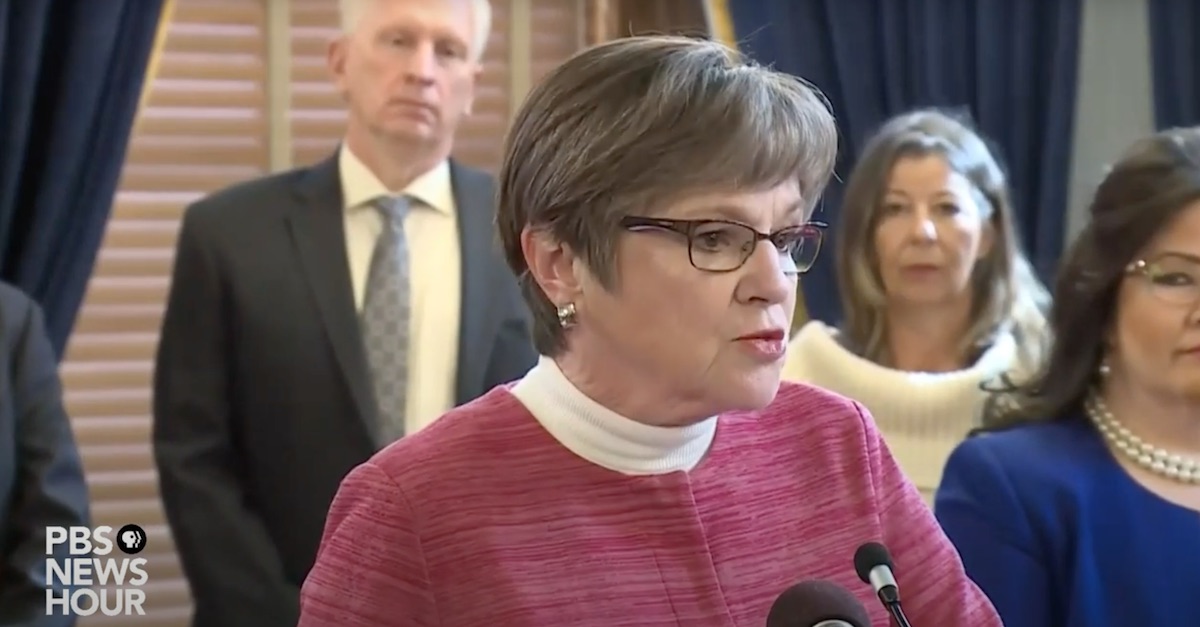 Update: Trump Judge Gives Kansas Churches a Win Against Democratic Governor, But with a Massive List of Caveats.

“Plaintiffs’ sincerely held religious beliefs teach that Bible is the inspired Word of God and the sole authority for faith and practice,” the lawsuit said. “Plaintiffs sincerely believe that the Bible teaches the necessity of gathering together for corporate prayer and worship and that such assembly is necessary and good for the Church and its members’ spiritual growth.”

Kelly, who defeated Republican Kris Kobach in the gubernatorial race of 2018, issued an executive order limiting in-person worship to 10 people or less. The plaintiffs–First Baptist Church and Pastor Stephen Ormord, and Calvary Baptist Church and Pastor Aaron Harris—said that the governor’s orders unlawfully target people of faith while exempting secular activities from the same restrictions.

What Executive Order 20-18 (April 7) said about “all public or private mass gatherings” that were prohibited, as it pertained to churches:

What the EO said about exemptions: 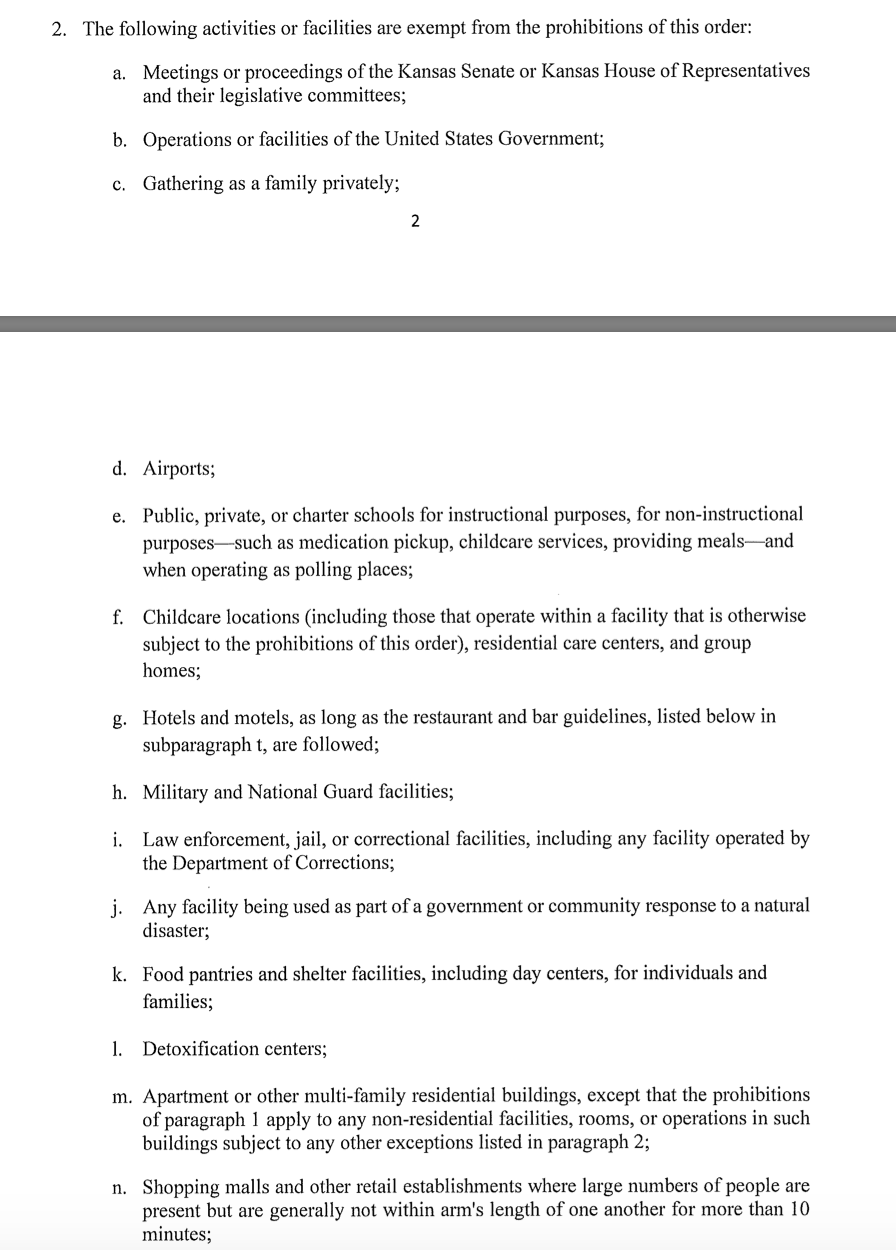 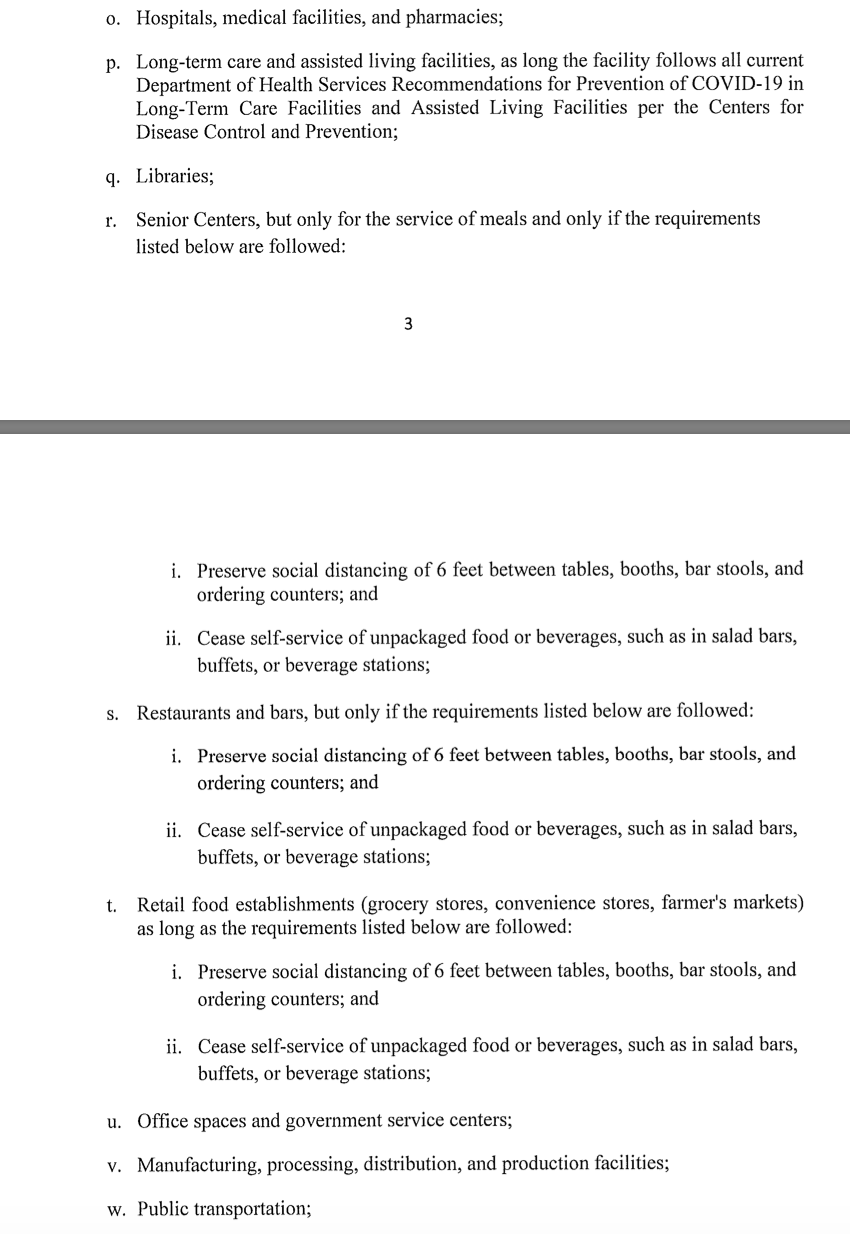 The plaintiffs cited Attorney General William Barr’s warning against trampling of First Amendment rights. Barr said that there should be no “special restrictions on religious activity that do not also apply to similar nonreligious activity”:

For example, if a government allows movie theaters, restaurants, concert halls, and other comparable places to assemble to remain open and unrestricted, it may not order houses of worship to close, limit their congregation size, or otherwise impede religious gatherings. Religious institutions must not be singled out for special burdens.

The plaintiffs said they had indoor services on Easter Sunday with more than 20 people gathered in the churches. According to the lawsuit, Harris was warned that he could be charged with a crime if it happens against this upcoming Sunday:

On Easter Sunday, April 12, 2020, in Dodge City, Kansas, Plaintiffs First Baptist Church and Pastor Stephen Ormord attempted to hold an outdoor, “drive-in” church service with approximately 20 of their congregants parked in cars in front of the church spaced 6 feet apart. Due to high winds and technological difficulties, the congregants were unable to hear or effectively participate in the service. The church had already adopted rigorous social distancing and health safety protocol to protect individuals gathered for worship, and the congregation was able to safely conduct the service within the sanctuary space pursuant to that protocol by remaining 6 feet apart throughout the service.

On Easter Sunday, April 12, 2020, in Junction City, Kansas, Plaintiffs Calvary Baptist Church and Pastor Aaron Harris held an in-door church service with 21 of their congregants while adopting rigorous social distancing and health safety protocols to protect individuals gathered for worship. A member of local law enforcement monitored the service inside the building.

On April 14, Pastor Harris spoke with the Geary County Sheriff to discuss whether the Sheriff would enforce the Executive Order 20-18 that was issued. The Sheriff warned Pastor Harris that he would be subject to criminal enforcement of Governor’s Executive Order 20-18 should his church hold an in-person service the following week in which more than 10 people were sitting in the pews.

The plaintiffs maintain that the executive order “substantially interferes with Plaintiffs’ ability to carry out their religious doctrine, faith, and mission” and unlawfully “targets, discriminates against, and shows hostility towards churches, including Plaintiffs.”

They want a U.S. District judge on the District Court of Kansas to declare Kelly’s EO unconstitutional and issue a temporary restraining order, preliminary injunction, and permanent injunction to block a state attempt to stop citizens from “meet[ing] for worship while practicing adequate social distancing.”

This was not the first lawsuit of its kind filed during the pandemic.