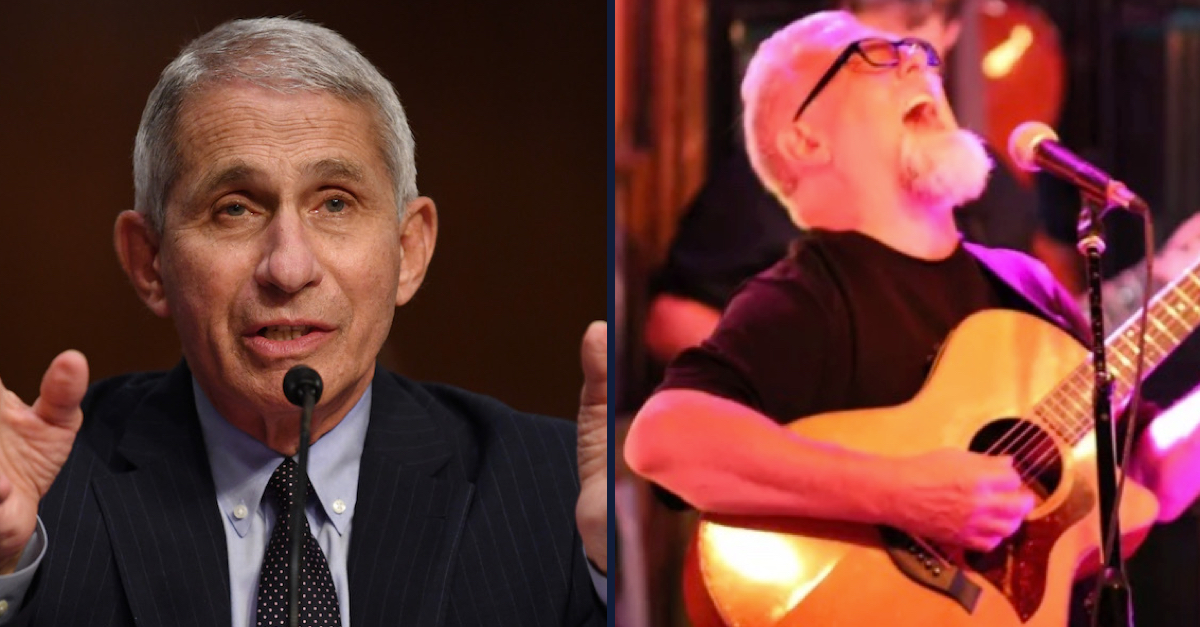 Dr. Anthony Fauci, director of the National Institute for Allergy and Infectious Diseases, testifies at a hearing of the Senate Health, Education, Labor and Pensions Committee on June 30, 2020 in Washington, DC. The committee is examining efforts to contain the Covid-19 pandemic while putting people back to work and kids back in school.

The widow of a Missouri musician who died from COVID-19 in 2020 says that Dr. Anthony Fauci and the National Institutes of Health (NIH) are responsible for her husband’s death, and she is taking them to court.

Jimmy Dykes, a popular Kansas City musician and music teacher, died in November 2020 from COVID-19 after spending weeks on a ventilator. Now, his wife Leann Dykes is suing the National Institutes of Health (NIH), the National Institute of Allergy and Infections Diseases (NIAID), and the nonprofit EcoHealth Alliance (EHA), accusing them of indirectly causing her husband’s death. The suit alleges negligence, wrongful death, and strict liability, and singles out both Fauci, as the head of NIAID and Francis Collins, as the head of the NIH, for responsibility as well.

The complaint starts with the allegation that ahead of the worldwide coronavirus pandemic a lab in Wuhan, China, was conducting “gain-of-function” (GOF) research.

This description doesn’t paint the whole picture. According to 2014 NIH-commissioned white paper, the “ultimate objective of such research is to better inform public health and preparedness efforts and/or development of medical countermeasures.”

The complaint contains other allegations that lack context.

“On or about September of 2019, the COVID-19 virus leaked from the Wuhan Institute of Virology Laboratory in Wuhan, China, which was actively performing research into coronaviruses, including gain of function research,” the complaint says.

The origin of the coronavirus has not been definitively determined. A Republican-issued Senate report concluded that the pandemic was most likely caused by a lab leak, but scientists dispute that conclusion.

The lawsuit says that the NIH and NIAID, through a grant to EHA from 2014 to 2019, was at least partially funding that research, but that is not at all clear. The NIH, for its part, denies that any U.S. funding went to gain-of-function research in Wuhan.

“[N]either NIH nor NIAID have ever approved any grant that would have supported ‘gain-of-function’ research on coronaviruses that would have increased their transmissibility or lethality for humans,” the NIH said in a statement in May 2021.

Multiple fact checks have also shown that claims from Republican lawmakers of U.S. funding of GOF research in Wuhan do not always bear out.

But according to Leann Dykes’ lawsuit, that’s exactly what happened.

The United States, acting by and through Mr. Collins and Mr. Fauci, was negligent and careless in one or more of the following respects:

(c) At the time NIH and NIAID funded monies to the Wuhan Institute of Virology, Mr. Collins and Mr. Fauci knew or should have known that they had no oversight and no way of knowing how safe the laboratories were where these risky experiments were taking place.

Notwithstanding these facts, Mr. Collins and Mr. Fauci negligently and carelessly funded monies to the Wuhan Institute of Virology which they had no supervision nor control over.

Leann Dykes says that the defendants’ negligence “directly and proximately caused or contributed to cause the deceased to die and also to endure pain and suffering between the time he contracted COVID-19 and the time of his death.” She is claiming damages based on “pain and suffering” under Missouri’s wrongful death statute, and is seeking compensation for “the loss of services, consortium, companionship, comfort, instruction, guidance, counsel, training, and support by reason of death.”

“As a direct and proximate result of the negligent actions and omissions of Defendants NIH, NIAID, United States and the EHA in funding monies to the Wuhan Institute Of Virology, the Wuhan Institute created a deadly coronavirus that leaked from its laboratory and spread worldwide, causing the death of Jimmy C. Dykes, Plaintiff’s husband,” the complaint says.

In addition to negligence and wrongful death, Leann Dykes is also suing under a theory of strict liability, arguing that EHA, in funding the Wuhan lab, “engaged in an abnormally dangerous activity, and is liable” for Jimmy Dykes’ death and Leann Dykes’ subsequent damages.

Leann Dykes did not name a specific amount in damages.

Representatives for Leann Dykes and the defendants did not immediately respond to Law&Crime’s emailed requests for comment.

[Photo of Fauci via Kevin Dietsch/Getty Images. Photo of Jimmy Dykes via GoFundMe.]