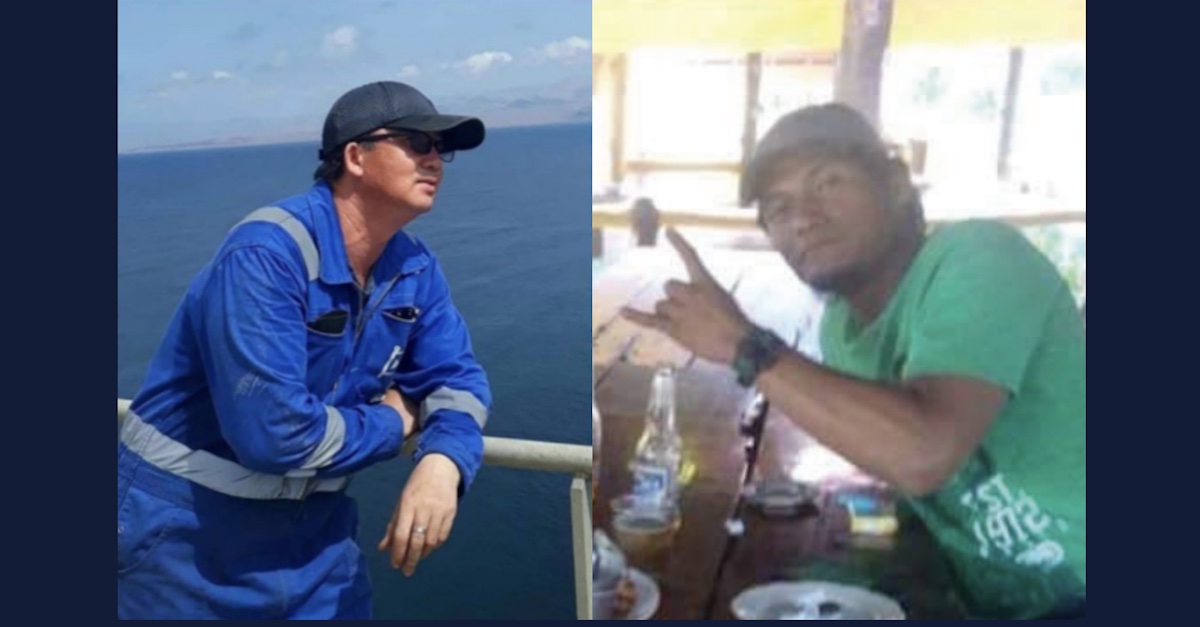 A Filipino seaman who fatally stabbed a ship supervisor during a psychotic episode his lawyers blame in part on stressful COVID-related conditions for seafarers was sentenced Monday to 20 years in federal prison.

Michael Dequito Monegro, 44, was in the throes of what a psychiatrist deemed a “delusional disorder” when he repeatedly stabbed Manolito Santillan, 50, on Sept. 20, 2020, because he falsely believed Santillan was having an affair with his wife while stalking him as part of a longterm assassination plot, his lawyers said in a 22-page memorandum.

Both citizens of the Philippines, the men were working on the container ship MSC Ravenna and were about 80 nautical miles off the coast of Southern California, according to court documents, when other crew members witnessed Monegro attack Santillan.

Monegro stabbed Santillan 31 times, prosecutors said, later telling investigators he’d stopped only because he was tired. Santillan spoke during the attack, with witnesses saying he’d told Monegro: “I hope the Lord forgives you” and “I’m dead, Michael,” according to prosecutors’ 16-page memo.

Santillan was the MSC Ravenna’s well-liked boatswain or bosun, who supervised the ship’s deck crew and was considered by some crew members to be a coach, prosecutors said.

But in the months before the attack, Monegro’s lawyers said he had become fixated on Santillan, developing “an irrational set of beliefs” about a supposed stalking and hacking plot targeting Monegro’s phone and social media accounts. He also falsely believed Santillan was having an affair with his wife, who was home in the Philippines.

“There is no telling why Mr. Monegro’s delusional disorder focused so tightly on his bosun, Mr. Santillan,” his lawyers said. “By all accounts from Mr. Monegro’s shipmates, Mr. Santillan was a good boss and had no animosity toward Mr. Monegro, and certainly no designs on his family or on his life.”

The murder occurred as the crew members were in a dressing room the ship’s upper deck about 8 a.m., awaiting their daily assignments. Upon arrival, Santillan commented “about how he and several crew members would be flying back to the Philippines in a few days,” and Monegro asked him to move into a locker room, then began stabbing him “in full view of the other crew members” when he refused.

Monegro continued stabbing Santillan after other crew members hit him in the head with a trash can, eventually lying on top of his body before the ship captain “was able to persuade him to step away,” prosecutors said in their sentencing memo. Santillan was pronounced dead at 8:34 a.m.

Prosecutors say Monegro used two knives in the killing – one that he’d apparently grabbed from somewhere on the ship, and another he removed from Santillan’s coveralls during the attack.

Crew members confined Monegro to a cabin with constant security until the ship eventually docked at the Port of Los Angeles a week later on Sept. 27, 2020. He’s been in federal custody since.

“Because there was nowhere else to store [Santillan’s] body, the crew members had to place the body in the ship’s walk-in fish refrigerator for storage until the ship arrived in Los Angeles,” according to prosecutors’ memo.

At the time of the murder, the MSC Ravenna was ending a two-week voyage from Shanghai, China, to the Port of Los Angeles, but Monegro’s lawyers say he and the rest of the crew “had not been allowed ashore since April of 2020.” Monegro was already in physical pain from a back injury, and the death of his wife’s mother had increased his financial distress and left his wife caring for their children and unable to work.

“All of this took place during a pandemic that affected the life of almost everyone everywhere, but that had a notably disproportionate impact on seafarers,” according to the memo from Deputy Federal Public Defenders Howard Shneider and Marta VanLandingham.

“Usually the seamen could look forward to time off while in port; after anchoring they would be given time for rest and recreation as the containers were unloaded and loaded,” Shneider and VanLandingham wrote. “But during the pandemic, such shore leaves were almost entirely cut off, as ports around the world imposed quarantine regulations; there was no release from the tedious stresses of the ship.”

Shuttered air travel also made replacement sailors unavailable, so seamen such as Monegro had their contracts “were extended involuntarily, and ships often had to function with a reduced complement of sailors.”

Monegro’s lawyers said they compiled “many newspaper articles and scientific studies analyzing the effect of the pandemic on seafarers.” They included three with their memo but said “many more can be provided upon request.”

Monegro pleaded guilty in May to committing an act of violence against a person onboard a ship that is likely to endanger the safe navigation of the ship.

Shneider and VanLandingham asked for Monegro to be sentenced to 63 months in prison, while Assistant U.S. Attorneys Matthew W. O’Brien, Mark A. Williams and Jeffrey M. Chemersinky asked for 240 months.

On Monday, U.S. District Judge Dale S. Fischer in Los Angeles sided with prosecutors, who said in their memo that “the tragic impact of defendant’s conduct cannot be overstated.”

Monegro’s murder of Santillan left “left behind [Santillan’s] wife and daughter, who was 17 at the time of the murder.”

“[Santillan] was the sole bread winner for the family, and his death caused significant financial strain on the family,” prosecutors said.

Monegro wrote a letter to the court that is translated in the court file: “I am asking the family of my bosun forgiveness. I hope that when I get out of prison, I would be able to find a job so that I can support my son in his studies. Thank you also to my legal team and to you Judge.”