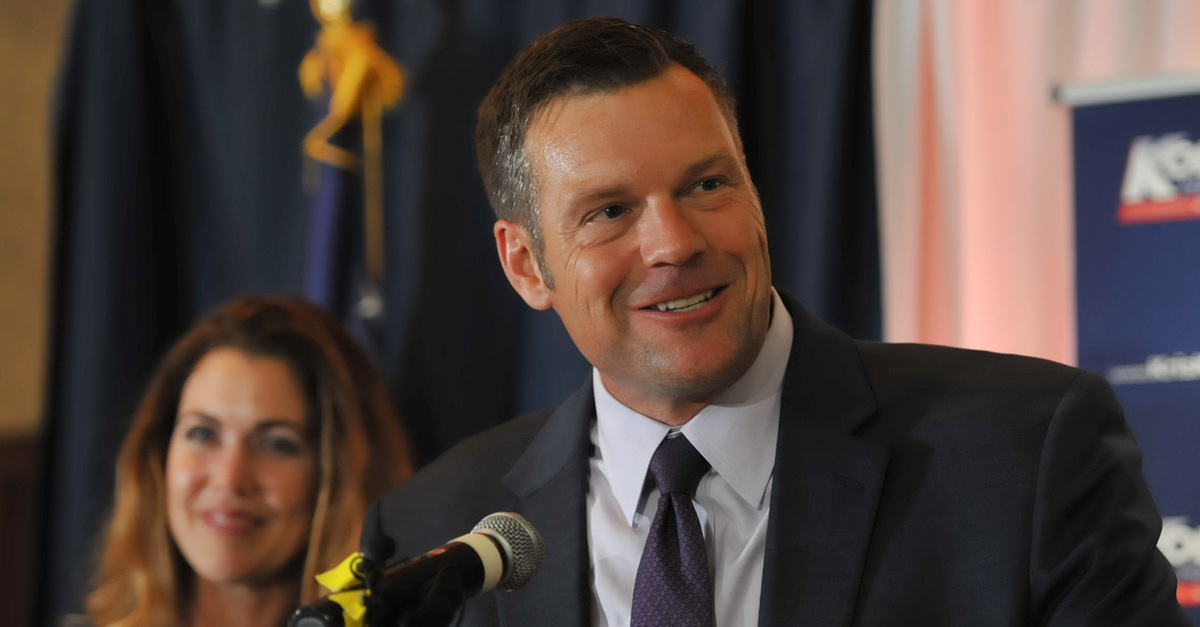 Kobach’s admission came by way of an agreement with the Kansas Judicial Branch’s Office of the Disciplinary Administrator (ODA) in response to an official ethics complaint filed against the states’ former secretary of state by Massachusetts-based attorney J. Whitfield Larrabee. Larrabee’s ethics complaint was initially submitted with a separate state body focused on disciplining attorneys.

In disobeying the order of a federal judge, Kobach violated Rule 8.4(d) of the Kansas Rules of Professional Conduct by engaging “in conduct that is prejudicial to the administration of justice.”

Larrabee also alleges that “Kobach violated Rules 8.4(c),8.4(d) and 8.4(g) of the Kansas Rules of Professional Conduct” by deflecting blame onto his subordinates, for conduct “prejudicial to the administration of justice, for “dishonesty” and for “engaging in other conduct that adversely reflects on his fitness to practice law.”

“Kobach is so dishonest, unscrupulous, malicious and unethical that he is unfit to practice law,” the complaint concludes. 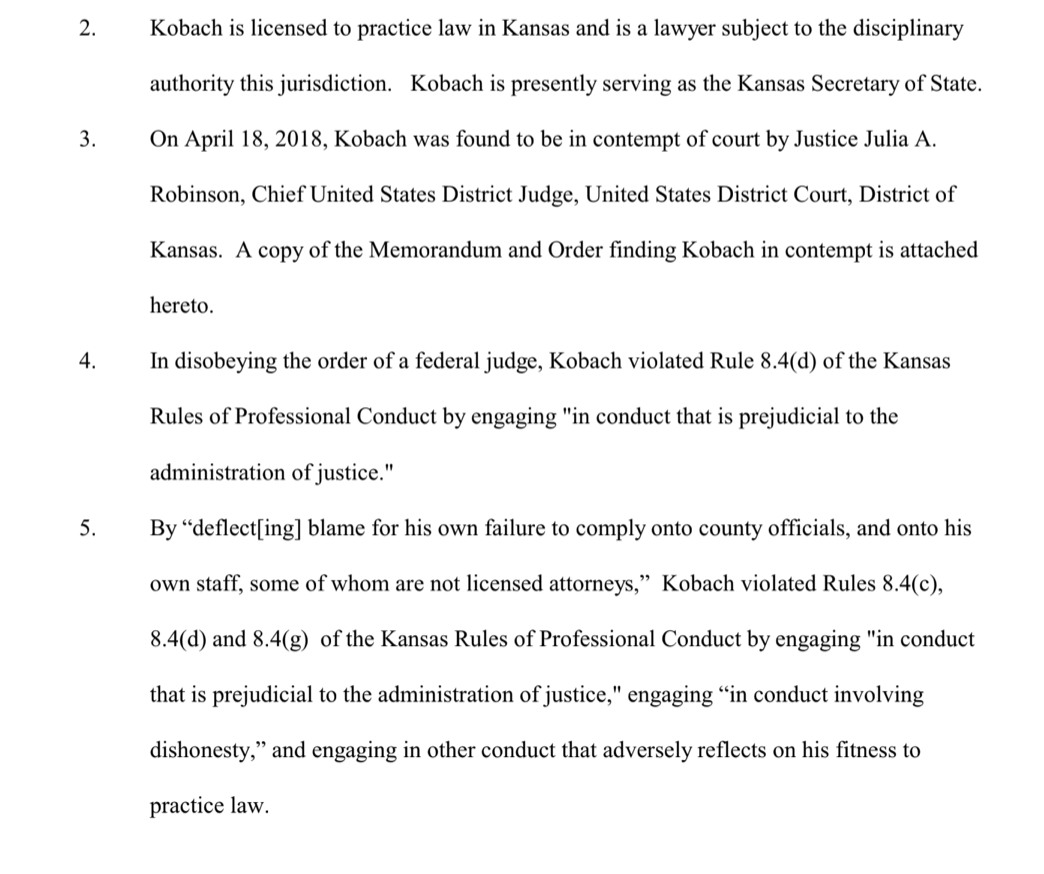 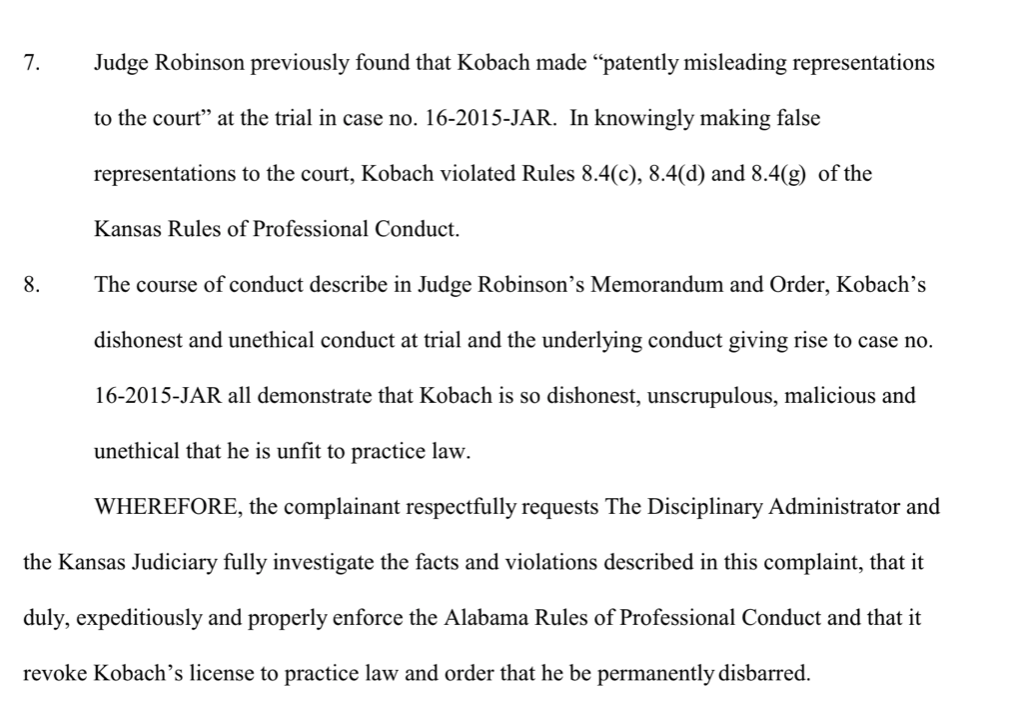 The ODA responded somewhat agnostically to those allegations but ultimately agreed that Kobach did violate at least some tenets of the state board’s professional rules.

In an October 25 letter, the ODA wrote: “[T]he Review Committee for the Kansas Board for the Discipline of Attorneys has considered the information related to your complaint and has approved a request from Mr. Kobach that the complaint be referred to the Attorney Diversion Program. Referral to the diversion program by the committee is equivalent to a finding under Kansas Supreme Court Rule 210(c) that there is probable cause to believe that the respondent violated the Kansas Rules of Professional Conduct.”

Kansas Disciplinary Letter re: Kris Kobach by Law&Crime on Scribd

In other words, Kobach is currently bound by probationary guidelines.

Diversion agreements are distant cousins of court-ordered probation. They are formal arrangements with specific terms and conditions that a person must make good on in order to have pending charges against them dismissed. Effectively, like probation, the person subject to such an agreement is “on paper.” Unlike probation, however, the person who must complete the terms and conditions is not required to enter a plea and courts have ruled that such agreements expressly do not constitute plea bargaining. In sum, diversion agreements are methods to avoid bringing charges or being officially charged.

“It’s odd that a candidate for the United States Senate has an open ethics case and has admitted to unethical conduct,” Larrabee said in an email to Law&Crime.

Under rules set by the Kansas Supreme Court, such diversion agreements typically “remain confidential.” But Kobach and the ODA agreed to release a few details from their agreement.

Kris Kobach entered into a diversion agreement with the office on October 10, 2019. Successful completion of the diversion will resolve the disciplinary complaint(s) filed against Mr. Kobach alleging misconduct in matters relating to the federal court litigation, Fish, et al. v. Kris Kobach. In the agreement, Mr. Kobach stipulated that he did not properly supervise both lawyer and nonlawyer staff during the federal court litigation, in violation of KRPC 5.1 (Responsibilities of Partners, Manager and Supervisory Lawyers) and KRPC 5.3 (Law Firms and Associations: Responsibilities Regarding Nonlawyer Assistance). There was no finding of dishonest conduct on the part of Mr. Kobach.”

An ODA administrator confirmed the disposition of the case in an email to Law&Crime on Monday–but noted that commenting on the existence of such agreements is normally not allowed. Because Kobach’s counsel agreed to the disclosure, however, the ODA was able to confirm both the existence and the status of the case.

“He’s been given a benefit because of his privileged position,” Larrabee added.  “As an elected official, he should be held to a high standard. It’s a shame when lawyers and privileged people are given a slap on the risk for blatant ethical violations.”

The disciplinary case against Kobach stems from his courtroom efforts to vindicate a strict voter registration law passed by the Kansas GOP.

Kobach, as Kansas’s then-secretary of state, raised eyebrows by taking the case on himself–against the advice of his own staff. He lost the case and, in the process, made a spectacle of the proceedings due to his apparent unfamiliarity with basic aspects of law, evidence handling, civil procedure and courtroom behavior.

As a result of his poor performance, Kobach was dinged by U.S. District Judge Julie Robinson, who ordered him to take six hours of continuing legal education classes.

“It is not clear to the Court whether [Kobach] repeatedly failed to meet his disclosure obligations intentionally or due to his unfamiliarity with the federal rules,” Robinson wrote. “Therefore, the Court finds that an additional sanction is appropriate in the form of Continuing Legal Education. [Kobach] chose to represent his own office in this matter, and as such, had a duty to familiarize himself with the governing rules of procedure, and to ensure as the lead attorney on this case that his discovery obligations were satisfied despite his many duties as a busy public servant.”