Trump Judge Gives Kansas Churches a Win Against Democratic Governor, But with a Massive List of Caveats 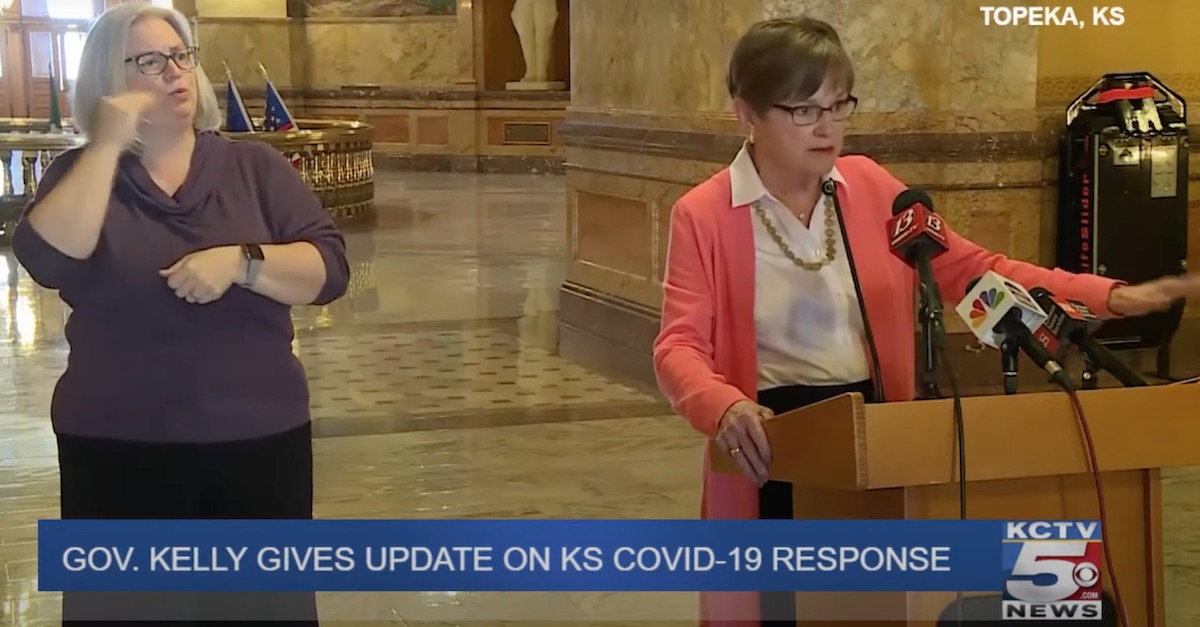 A federal judge in Kansas has agreed to a list of 17 bullet points for one church and a list of seven for another after the churches and members of their congregations sued Gov. Laura Kelly, a Democrat, arguing that Gov. Kelly’s executive orders which limited gatherings also violated their First Amendment rights. The governor issued the orders in response to the novel coronavirus. The churches sued because they wished to remain open. The judge said they could — subject to the bullet points.

The judge, John W. Broomes, is a Donald Trump appointee in the District of Kansas. The judge over the weekend issued a temporary restraining order against parts of the governor’s executive orders. In so ruling, the judge noted that restraining the enforcement of parts of the governor’s executive order was “in the public interest” because the plaintiffs were “likely to succeed on the merits of their claim alleging a violation of their First Amendment right to the free exercise of religion.”  Without relief, the judge said the plaintiffs were “likely to suffer irreparable harm in the form of denial of their constitutional right to the free exercise of their religion.”  Broomes called the executive orders “state-imposed restrictions on religious exercises that are not narrowly tailored to further the compelling governmental interest in halting the spread of COVID19.”

That legal language cites the standards necessary for plaintiffs to prevail on restraining order claims. It also cites the strict scrutiny analysis courts use to examine infringements on constitutional rights.

The Broomes decision carefully walks readers through Gov. Kelly’s executive orders and notes that many had clear carve-outs for religious activities. However, things went off track in an April 7th order which read, in part:

With regard to churches or other religious services or activities, this order prohibits gatherings of more than ten congregants or parishioner[s] in the same building or confined or enclosed space. However, the number of individuals – such as preachers, lay readers, choir or musical performer, or liturgists – conducting or performing a religious service may exceed ten as long as those individuals follow appropriate safety protocols, including maintaining a six-foot distance between individuals and following other directive regarding social distancing, hygiene, and other efforts to slow the spread of COVID-19.

The judge said “a fair reading of [the executive orders] shows that they operate as a wholesale prohibition against assembling for religious services anywhere in the state by more than ten congregants . . . [t]hus, [the orders] sweep far beyond the ‘incidental effect’ on religious activity excused” by previous Supreme Court cases.

The crux of the judge’s decision is that the governor carved out different restrictions for different types of activities.  Some applied to religion; some applied to government, transportation, and health care work.  The U.S. Supreme Court has upheld laws which do not single out specific religious activities but which just so happen to infringe on religion; the high court has also struck down laws which do single out religious activities.  Per the judge’s weekend decision in Kansas:

In this case, [the executive orders] expressly purport to restrict in-person religious assembly by more than ten congregants. In that sense, they are not facially neutral. [The governor] asserts that despite the express restrictions imposed on religious assembly, the laws are facially neutral because they apply as well to a much broader swath of secular activity in addition to the overt limitations placed on church gatherings. Nevertheless, while these executive orders begin with a broad prohibition against mass gatherings, they proceed to carve out broad exemptions for a host of secular activities, many of which bear similarities to the sort of personal contact that will occur during in-person religious services.

Judge Broomes noted that case law required courts to strike down “religious gerrymanders” and that this case involves executive orders which “fail[] to prohibit secular activity that endangers the same interests to a similar or greater degree than the prohibited religious conduct.”

“[C]hurches and religious activities appear to have been singled out among essential functions for stricter treatment,” the judge went on to say.  Churches “appears to be the only essential function whose core purpose – association for the purpose of worship – had been basically eliminated.” The Kansas governor was more lenient to activities involving “airports, childcare locations, hotels, food pantries and shelters, detoxification centers, retail establishments (subject to the distancing and “essential function” purpose noted above), retail food establishments, public transportation, job centers, office spaces used for essential functions, and the apparently broad category of “manufacturing, processing, distribution, and production facilities,” the judge said.

The judge then assumed the worst when it came to the governor’s intentions:  “the most reasonable inference from this disparate treatment is that the essential function of religious activity was targeted for stricter treatment due to the nature of the activity involved, rather than because such gatherings pose unique health risks that mass gatherings at commercial and other facilities do not, or because the risks at religious gatherings uniquely cannot be adequately mitigated with safety protocols.”

The following restrictions, suggested by the churches themselves, are entered into the judge’s order. They apply to the two churches which sued to remain open — with many limits:

For the First Baptist Church of Dodge City, Kansas:

To the Calvary Baptist Church of Junction City, Kansas:

Read the court documents below.