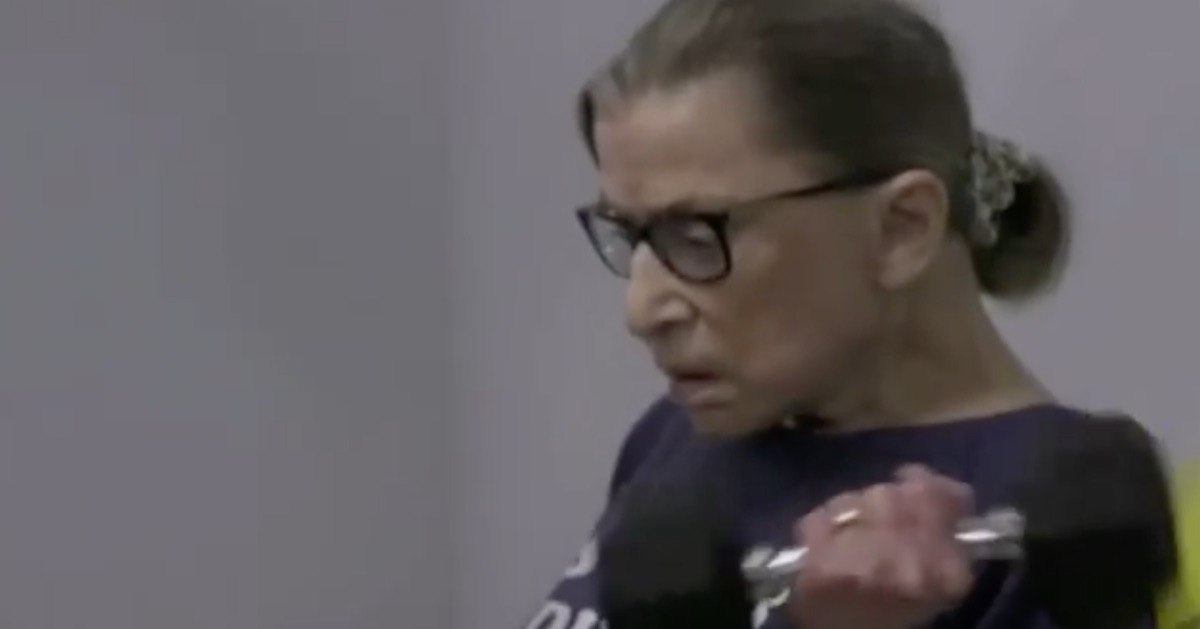 Supreme Court Justice Ruth Bader Ginsburg, a four-time cancer survivor, was not interested in letting the COVID-19 pandemic cut into her gym time, a fact many found “alarming.” The notorious 87-year-old legal giant, her long-time trainer revealed, continued to work out at the Supreme Court gym twice a week, despite the risks (and despite recent criticism of public figures who have gone to the gym).

First to the story on Tuesday was Law360, but The Cut added an interesting wrinkle to the situation on Wednesday. Justice Ginsburg’s trainer Bryant Johnson said the following:

As of today, though, the pair have stopped meeting — Johnson confirmed in an email with the Cut that he and RBG haven’t worked out since D.C.’s stay-at-home order took effect on Wednesday morning.

The outlet suggested that Ginsburg and Johnson would no longer be meeting at the SCOTUS gym now as a direct result of Washington, D.C.’s stay-at-home order. The D.C. stay-at-home order, which went into effect on Wednesday at 12:01 a.m., applied to public gyms.

So, does that mean Justice Ginsburg is going to stop working out in the SCOTUS so-called “private gym” altogether, or just without her trainer? What about the other Supreme Court justices? Is Chief Justice John Roberts still doing some heavy lifting? Law&Crime reached out to the Court’s public information office for comment and clarification on the justices’ gym habits and access during the pandemic.

A couple of things are for certain: the Supreme Court has been closed to the public since March 12; justices, we have already seen, have in some instances been allowed to participate in court business remotely; people (on the left, especially) were really not happy to see an at-risk Justice Ginsburg out and about during a pandemic several months before the election.

Oh God someone please put her in quarantine till after November!

She can absolutely have my vent if she needs it.

I am not a fan of this

Others were upset that the justice still has a gym to go to while the commoner has been told to stay quarantined at home.

I am not a fan of this

Above the law. And putting her trainer in danger too. Nice.

… In which everyone cheers for special rules for the privileged class?

This is unacceptable. I usually have nothing but respect for her but she makes enough to have a gym in her own home.

She should be setting an example.

“Rules for thee not for me”

If this was one of Trump’s SCOTUS picks this article would be written very differently. CNN Blows