Trump Just Ripped an Inspector General Report That Actually Recycled Some of His Own B.S. 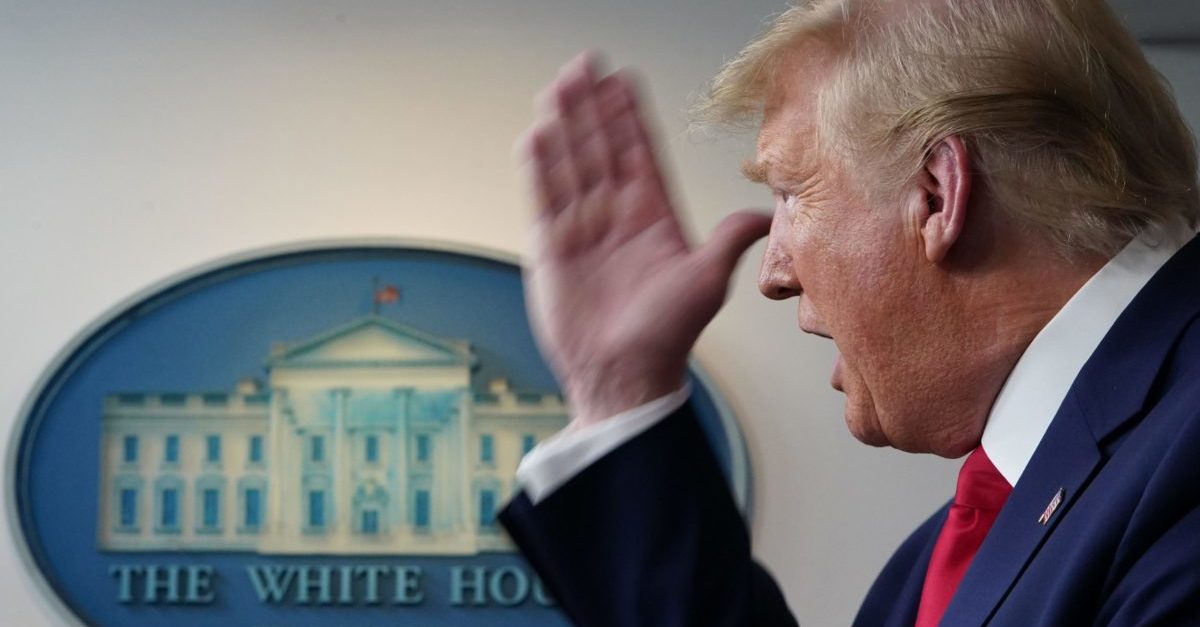 President Donald Trump on Tuesday blamed the World Health Organization (WHO) for COVID-19 failures and then took aim at a report issued by Department of Health and Human Services Office of Inspector General. The HHS OIG report issued Monday by Principal Deputy Inspector General Christi Grimm pinpointed systemic failures of the medical supply chain in these times of pandemic.

The report said doctors, hospitals, nurses, and other healthcare workers were struggling to obtain needed supplies and were, at times, reaching out to nail salons and even auto body shops for protective gear. In casting blame at the report’s findings and methodology, Trump suggested hundreds of on-the-ground hospital administrators lied to help an Obama-era official cook up a “fake” report about his own administration’s efforts. What Trump did not notice, however, was that part of the report recycled his own flawed views of his own administration’s legally-required role in fighting the coronavirus.

“Why didn’t the I.G., who spent 8 years with the Obama Administration (Did she Report on the failed H1N1 Swine Flu debacle where 17,000 people died?), want to talk to the Admirals, Generals, V.P. & others in charge, before doing her report,” Trump said on Twitter. “Another Fake Dossier!”

Why didn’t the I.G., who spent 8 years with the Obama Administration (Did she Report on the failed H1N1 Swine Flu debacle where 17,000 people died?), want to talk to the Admirals, Generals, V.P. & others in charge, before doing her report. Another Fake Dossier!

The W.H.O. really blew it. For some reason, funded largely by the United States, yet very China centric. We will be giving that a good look. Fortunately I rejected their advice on keeping our borders open to China early on. Why did they give us such a faulty recommendation?

The report, which Law&Crime highlighted yesterday, was based on telephone surveys from hospitals across America and its territories. Per the OIG report’s methodology:

We conducted a “pulse survey” (i.e., quick, point-in-time questions) by telephone (or in a few cases, by email) with administrators from a random sample of Medicare-certified hospitals across the nation and in some cases, their parent corporations. These conversations focused on three key issues regarding their COVID-19 response: 1) challenges responding to the COVID-19 pandemic, 2) strategies to mitigate the challenges, and 3) needs for government assistance.

We conducted the surveys on March 23–27, 2020 with one or more administrators.

We received responses from 323 of these 380 hospitals, for an 85 percent rate of contact.

The responding hospitals are located across 46 States, the District of Columbia, and Puerto Rico.

What’s ironic is that part of the OIG report actually contains a frequently parroted Trump Administration claim about the legally required strategic national stockpile of medical gear. The stockpile, according to current relevant law, is intended “to provide for and optimize the emergency health security of the United States, including the emergency health security of children and other vulnerable populations, in the event of a bioterrorist attack or other public health emergency.” (The phrase “and optimize” was recently added.)

Law&Crime has analyzed the stockpile numerous times. President Trump and his son-in-law, Jared Kushner, have repeatedly made dubious claims about the stockpile’s legal definition and legal function by suggesting states, not the federal government, are mostly responsible for America’s medical security in a pandemic. Late last week, the stockpile’s website was changed to reflect the Trump Administration’s verbal descriptions, which do not comport with current law — even as amended recently by congress. The basic thrust of the stockpile’s legal definitions and legal operative functions have barely changed since the 9/11 terrorist attacks. The law requires the federal government to keep medical equipment in storage, and Congress has appropriated additional monies to the stockpile because of COVID-19. ProPublica traced the gutting of the stockpile and, thus, America’s current unpreparedness to Tea Party-related budget battles.

Monday’s HHS OIG report conglomerates the tales of woe being shared by doctors, nurses, and hospital administrators which resulted from layers of bureaucratic tanglings and finger-pointing excuses. They can all generally be summarized by the phrase “the buck stops elsewhere.” But what the HHS OIG report did do was to import the Trump-Kushner decision to blame the states for the lack of medical gear. As Law&Crime reported just yesterday:

Law&Crime has previously addressed discrepancies between the black-letter law which sets forth the legal mission of the strategic national stockpile and what the administration is saying about it. Despite hospitals saying they needed federal assistance, the OIG report cites to and adopts recently-changed language from the strategic stockpile’s website to describe the stockpile’s function. The new language is legally spurious and puts the onus on states, rather than the federal government, for ensuring that medical gear is available. The OIG report says the national stockpile “supplements State and local stocks of life-saving pharmaceuticals and medical supplies for use in a public health emergency.” No such language appears in the legally-binding United States Code. Though the OIG report cites the stockpile website as its source for that information (footnote 16), it cites to the actual United States Code (footnotes 31 and 32) and the Code of Federal Regulations (footnotes 30 and 31) as authorities for other matters of concern.

Bottom line: In a way, the HHS OIG report comports with the Trump-Kushner wish to seek praise for actions which protect Americans (“New York City’s Javits Center is now one of the largest hospitals in the United States,” “the USNS Comfort, which is in New York — there’s been a lot of publicity about that coming in and all”) while deflecting blame for broader failures.

The OIG report adopts the administration’s legally questionable definition of the strategic national stockpile when it didn’t need to and, as such, pushes blame to the states for the issues the report documents from interviews with hundreds of hospital administrators. Therefore, Trump just trashed a report which reprinted his own excuses. He just doesn’t like the facts which came coupled to the excuses.