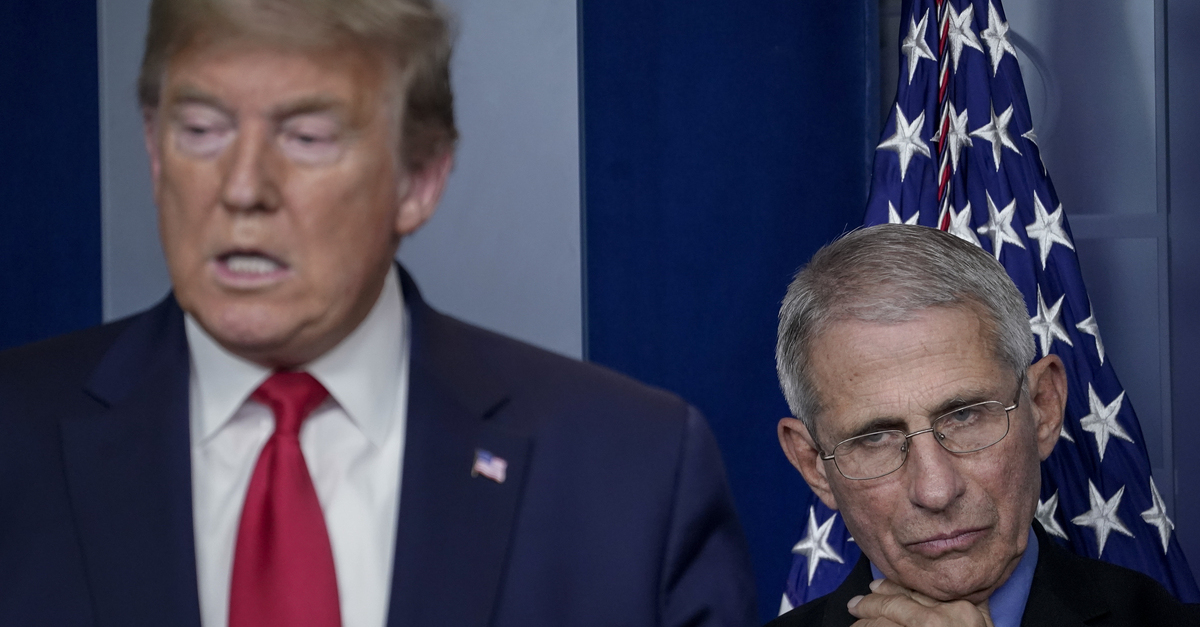 The White House has nixed a request from congressional Democrats for Dr. Anthony Fauci to appear before the House of Representatives next week. On the other hand, a planned briefing before the GOP-held Senate is still apparently in the cards.

Democrats had hoped to have the head of the National Institutes of Allergy and Infectious Diseases appear before the House Appropriations Committee’s Subcommittee on Labor, Health and Human Services, Education, and Related Agencies on May 6th.

“While the Trump Administration continues its whole-of-government response to COVID-19, including safely opening up America again and expediting vaccine development, it is counter-productive to have the very individuals involved in those efforts appearing at Congressional hearings,” White House spokesperson Judd Deere said in response to Democratic Party efforts. “We are committed to working with Congress to offer testimony at the appropriate time.”

That appropriate time appears to be precisely six days later than the spot on the calendar sought by House Democrats. According to Senate Health Committee Chair Sen. Lamar Alexander (R-Tenn.), Dr. Fauci will field questions from the upper chamber on May 12.

And the opposition party is grousing about their unequal treatment.

Originally reported by NBC News on Friday evening, the idea that Fauci was being barred from speaking to Congress was quickly seized upon by some critics of President Donald Trump.

“Why is Dr. Fauci’s testimony being blocked?” quizzed Devin Duke, a former cognitive neuroscientist whose Twitter claim to fame is being blocked by the 45th president. “It’s because he’s the only person who hasn’t budged on Trump’s anti-science bullshit.”

Peter Morley, a disabled patient advocate and healthcare activist who has testified before the same committee currently seeking Fauci, struck a similar theme when criticizing the White House’s decision to keep the House inquiry at bay.

“Why has the White House blocked Dr. Fauci from testifying about their response to #coronavirus?” Morley also asked out loud. “Trump says they have the BEST responses. PER Trump, most tests for #COVID__19 in the WORLD. What does Trump have to hide? Please Dr. Fauci, stand up for America. Stand up for YOU!”

While Vice President Mike Pence is technically at the helm of the administration’s response to the novel Coronavirus (COVID-19) pandemic, Fauci and other infectious disease experts, like U.S. Global AIDS Coordinator Deborah Birx, have decidedly stolen the spotlight and won most of the public’s esteem and confidence as the deadly contagion spreads.

While both state and federal government responses to the virus have flailed and succeeded to various degrees, Fauci and Birx have outpaced elected leadership as something akin to the nation’s soothing top scientists. Public opinion polls bear out the affection and credibility both Fauci and Birx have amassed during the unprecedented crisis.

Concerns about Fauci’s silencing, however, are not new.

A miniature scandal briefly erupted in late February about the possibility that he was being sidelined and shut up by the White House.

Fauci himself strongly refuted those claims in a press conference.

“I’ve never been muzzled,” he said, calling such allegations “a real misrepresentation” by the media.