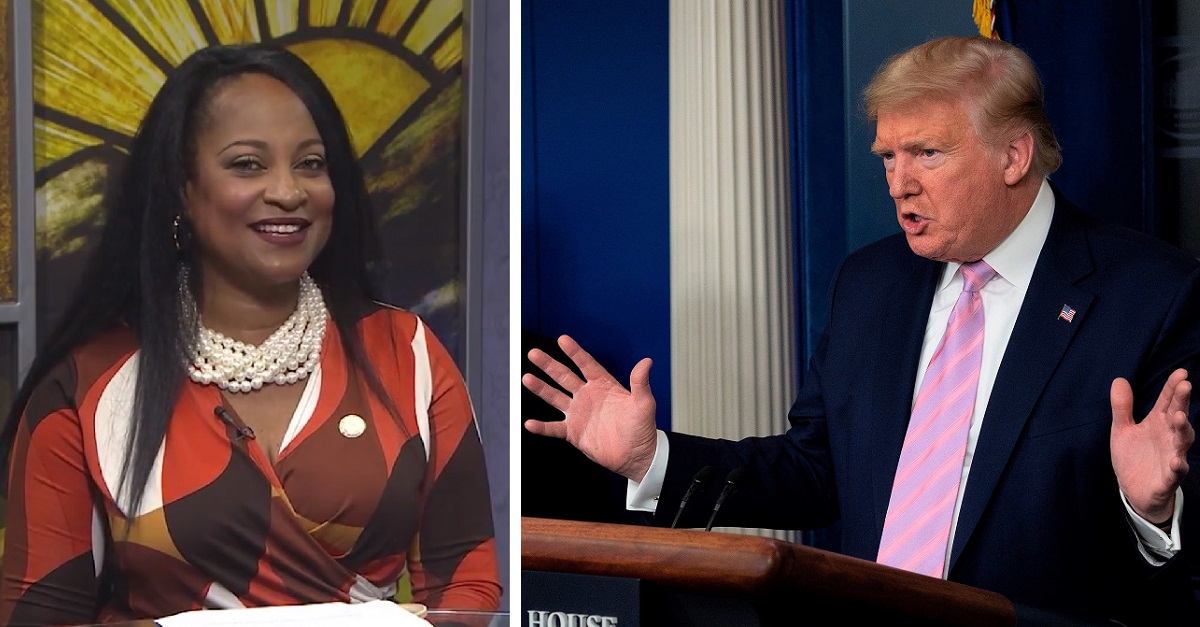 A member of the State of Ohio’s House of Representatives wants the International Criminal Court (ICC) in The Hague to begin proceedings against President Donald Trump for “crimes against humanity” over his statements about possible treatments for the novel coronavirus (COVID-19).

“I can’t take it anymore,” tweeted Rep. Tavia Galonski, a Democrat from Akron, on Sunday night. “I’ve been to The Hague. I’m making a referral for crimes against humanity tomorrow. Today’s press conference was the last straw. I know the need for a prosecution referral when I see one.”

I can’t take it anymore. I’ve been to The Hague. I’m making a referral for crimes against humanity tomorrow. Today’s press conference was the last straw. I know the need for a prosecution referral when I see one. https://t.co/XQin24gqY4

She made the comments in reaction to another tweet about Trump’s push for the drug hydroxychloroquine to be used to treat COVID-19.  Its effectiveness is debated as the government orders 29 million doses of the drug and Americans are warned not to seek it out as a preventative measure.

Galonski told the Ohio Capital Journal that she was serious about making the referral but demurred as to how to do it:  “I honestly have no idea,” she said as to the specifics of the procedure, but then said, “how hard can it be?”  She went on to tweet that she needs international lawyers to “suit up” to get Trump prosecuted internationally.  “I need every lawyer that ever did any work on the international level to contact me,” she said.

I need every lawyer that ever did any work on the international level to contact me at [email protected] immediately. When we worked on international custody cases we had a cadre of lawyers working on the case. Suit up! https://t.co/pkmF4cWGIQ

In response to a tweet which said “every single member” of the Republican Party should be held “accountable for not stopping the madness oozing from the White House before we all die,” Galonski suggested that the GOP should be charged for “aiding and abetting” Trump.

Per the Capital Journal, Galonski “said her plan was to find out on Monday the referral procedure for reporting an alleged crime against humanity to The Hague.”

As the Brookings Institution pointed out, the ICC has “set its sights on the U.S.”  However, the court’s sights were limited to actions U.S. personnel took in Afghanistan, which is a signatory to the Rome Statute.  “Because the U.S. never ratified the Rome Statute establishing the court, it cannot investigate crimes by Americans that occur on U.S. soil,” Brookings determined.

According to one Twitter user, Rep. Galonski didn’t want to hear any of this sort of talk:

Excuse me @OhioAG @GovMikeDeWine @ohgov your representative Tavina Galonski blocked me on twitter which, as a public servant, she isn’t allowed to do. Ironically it was because she had no grasp on the law. She’s embarrassing your State and our Country. pic.twitter.com/KYqDsmeEff

Galonski previously was involved in a bill to secure Trump’s tax returns, to which her Twitter attests.