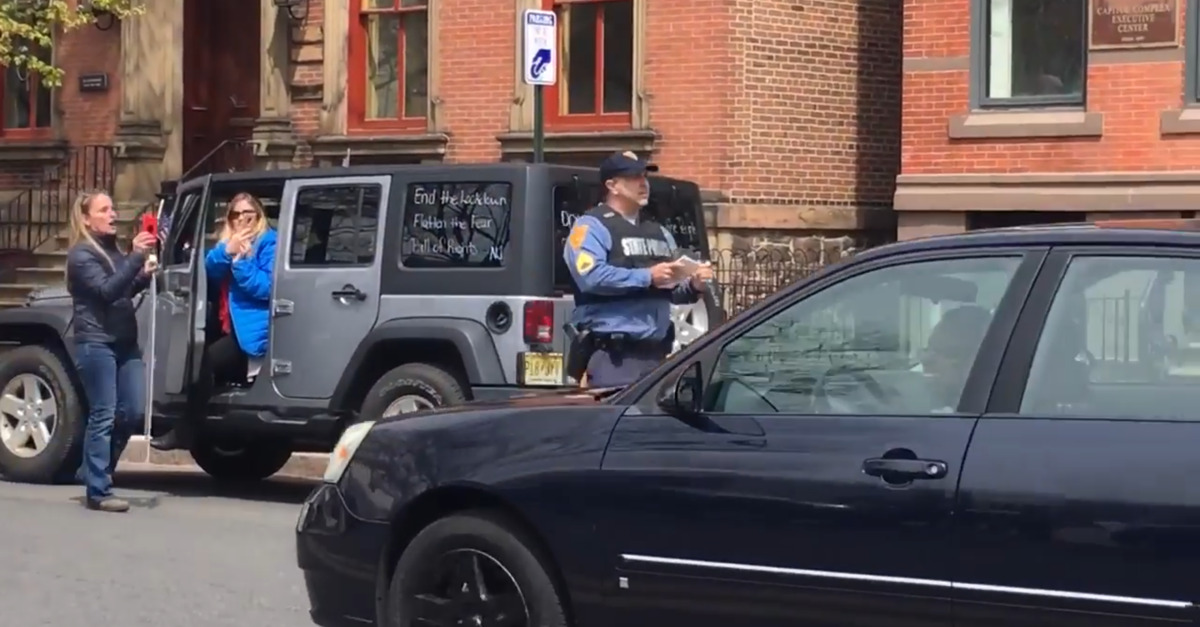 A woman in New Jersey has been charged with violating Governor Phil Murphy‘s stringent quarantine regime on Friday for allegedly planning a protest against statewide stay-at-home orders.

According to that enforcement update release, Kim Pagan of Toms River was the mind behind a Friday protest at the statehouse in Trenton, New Jersey. Covered by national media, an unknown number of protesters reportedly waved American flags, honked their car horns and shouted “no more fear” through a megaphone.

According to New York’s NBC affiliate, WNBC, one protestor’s car bore a hand-scrawled message in shoe polish which read: “PLANDEMIC.”

Similar protests have occurred in a few other states, but the American public is widely in favor of listening to public health officials’ recommendations. Many genuine civil libertarians have accepted the restrictive safety regimes. The far-right protests do not appear to have any sort of widespread support. Pagan’s action was reportedly the first in the tri-state area, according to WNBC.

Pagan was charged by New Jersey State Police with violating Murphy’s Coronavirus-inspired emergency order “by organizing a prohibited event” near the statehouse and elsewhere in the capital city in which “protesters gathered” in order “to demonstrate against the Governor’s Executive Orders,” according to authorities.

“Our police officers are working bravely and tirelessly every day to protect us during this health crisis. Regrettably, they are being called upon far too often to deal with people violating the emergency orders— or what is more egregious, people using the virus to spread fear or impede officers in their vital work,” Grewal said in the press release. “Staying home and maintaining social distance isn’t just the best advice to stay healthy, it’s the law. Make no mistake, we will do everything in our power to keep our residents and officers safe, and that means we won’t hesitate to file charges against violators.”

Murphy issued Executive Order 107 on March 21 in an attempt to slow the spread of the deadly contagion in one of the nation’s hardest-hit areas. New Jersey, which is located immiedately across the Hudson River from the New York City epicenter, currently has the second highest infection rate of any state in the country.

New Jersey authorities cited a total of 15 people over violations of the governor’s executive order on Friday. Seven non-essential businesses were also shut down by police. Most of those violations were charged as disorderly conduct and the defendants were largely given summonses; they were not arrested.

“Law enforcement and medical professionals are on the frontlines of this battle to protect the citizens of New Jersey from the COVID-19 virus, and we cannot stress enough how important it is that each person follow the guidelines set forth in the Executive Order,” Callahan said in a statement. “Because lives are at stake, enforcement action will be taken without hesitation against those who are blatantly placing the lives of others at risk.”

Each of the people charged on Friday faces a sentence of up to six months in jail or a fine of up to $1,000, or both.