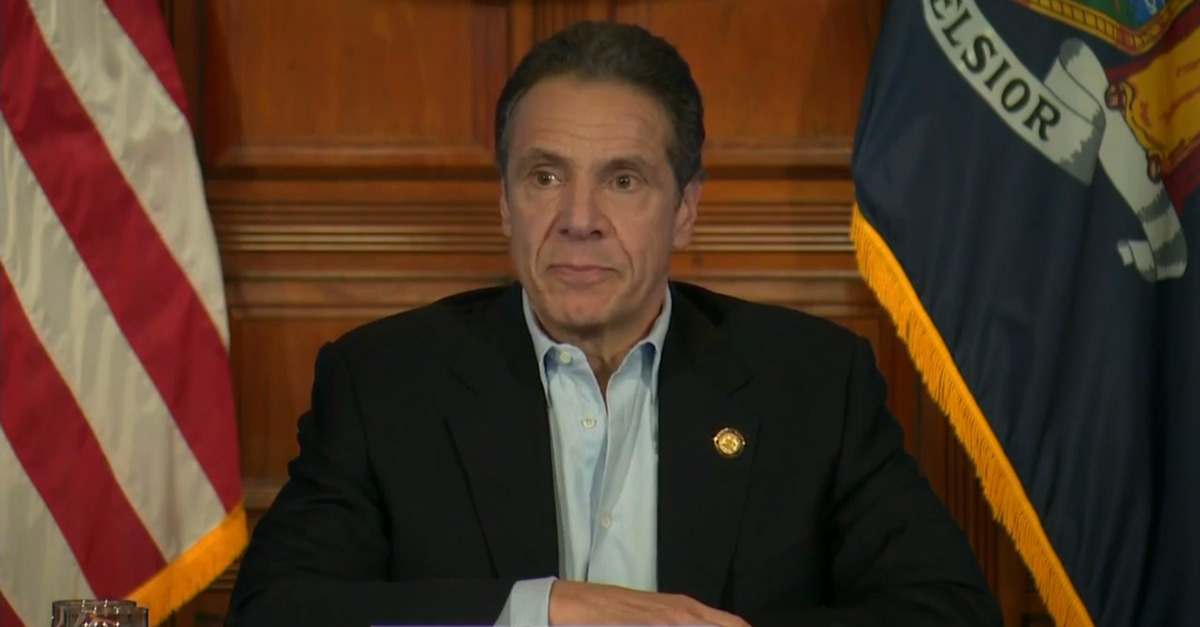 The Empire State is set to pave the way for a novel nuptial arrangement in response to the novel Coronavirus (COVID-19) pandemic by allowing city clerks to remotely officiate marriage ceremonies through the use of video conferencing software.

“We are today signing an executive order allowing people to get their marriage licenses remotely and also allowing clerks to perform ceremonies over video,” Secretary to the Governor Melissa DeRosa noted. “So if that’s an avenue people want to go down, it will be available to them.”

“Video marriage ceremonies,” Cuomo repeated. “There’s now no excuse when the question comes up for marriage. No excuse. You can do it by Zoom.”

“Yes or no,” the governor added, laughing.

The decision was apparently prompted by the fact that marriage bureaus across New York State are currently shuttered as non-essential.  The closings have decidedly put a crimp in New York’s marriage industry — not to mention the plans of star-crossed or tax-advantage-seeking couples.

Marriage issues are legally treated as something of a hybrid between civil rights and a civil liberties in the United States.

The Supreme Court, in the landmark case of Skinner v. Oklahoma ex rel. Williamson, described the institution as “one of the basic civil rights of man.”

But the state has always placed limits on the ability of individuals to enter into marriage — similar to the way the First Amendment is controversially regulated by time, place, and manner constraints.

Marriage, as creating the most important relation in life, as having more to do with the morals and civilization of a people than any other institution, has always been subject to the control of the legislature. That body prescribes the age at which parties may contract to marry, the procedure or form essential to constitute marriage, the duties and obligations it creates, its effects upon the property rights of both, present and prospective, and the acts which may constitute grounds for its dissolution.

In the case of Meyer v. Nebraska, the Supreme Court mused about the extent to which the 14th Amendment’s guarantee of Due Process guaranteed Americans unimpeded liberties — and decided strongly in favor of a liberty interest.

“Without doubt, [the 14th Amendment] denotes not merely freedom from bodily restraint but also the right of the individual to contract, to engage in any of the common occupations of life, to acquire useful knowledge, to marry, establish a home and bring up children, to worship God according to the dictates of his own conscience, and generally to enjoy those privileges long recognized at common law as essential to the orderly pursuit of happiness by free men,” the court reasoned.

More discrete areas of the state’s effective mandate to provide marriages are decidedly civil rights issues. The same-sex marriage movement and those fighting for interracial marriage decades before are signal successes of those courtroom-based efforts to interpret the constitution through the lens of equality under the law.

It’s not entirely clear that New York State’s emergency shutdowns of marriage bureaus would have necessarily run afoul of the rights and freedoms — and right to be free from discrimination — associated with marriage in the United States, but it looks like the Cuomo administration has moved swiftly to nip any such concerns in the bud.