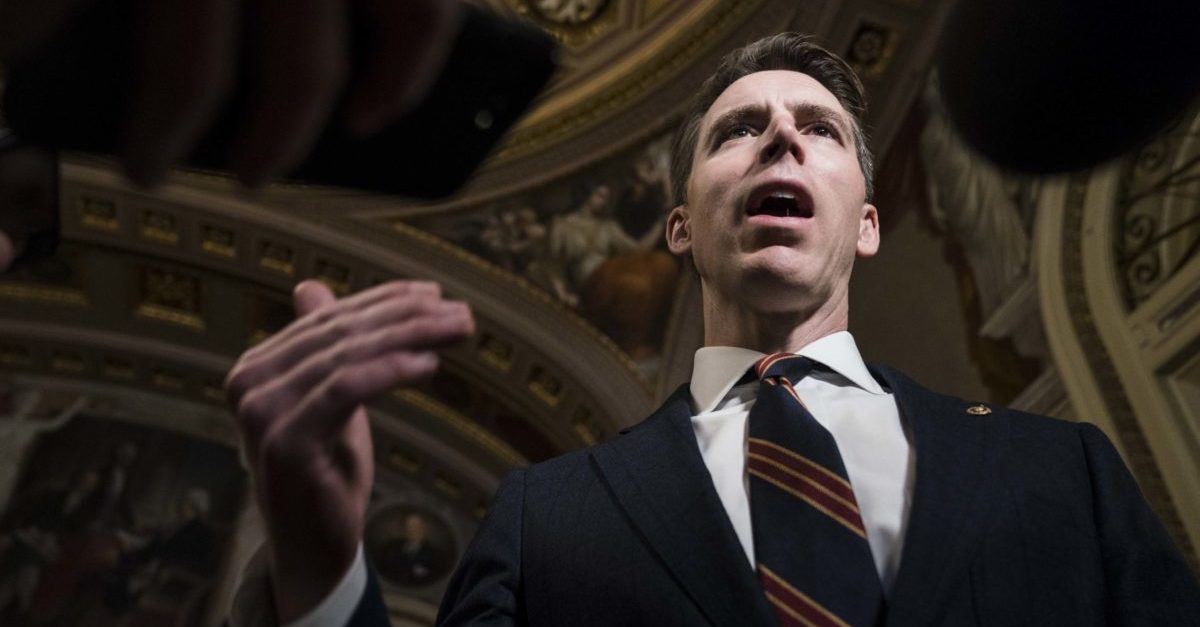 Josh Hawley, a Republican who represents Missouri in the U.S. Senate and who fashions himself as “constitutional lawyer” on Twitter, has raised an interesting argument about the precise contours of the First Amendment when it comes to companies like Facebook allegedly infringing on the free speech “rights” of users. Hawley, the former Missouri Attorney General, did not — despite hailing from the “Show-Me State” — show us explicitly why or how he came up with his theory. We’ll try to, even though Hawley should have borne this burden himself.

The gravamen of Hawley’s complaint seems to be that Facebook is — in his view — restricting the “free speech” rights of its users. Or, since that makes no sense, he may be arguing that the government should not be colluding with Facebook to affect the speech rights of citizens.

“Because free speech is now illegal America?” Hawley questioned in response to reports that Facebook worked with government authorities to limit protests against executive orders.

Here is the background. Hawley’s theory came after CNN and others reported that Facebook had shut down “Facebook Events” which sought to organize protests against executive orders which seek to control the coronavirus pandemic. Groups and posts, to the contrary, “might not be removed,” CNN reported, citing a Facebook spokesperson.

The executive orders have been issued by state governors and have spurred protests in places like Texas, Michigan, and New Jersey. The orders have also resulted in lawsuits alleging they are unconstitutional.

Anti-quarantine protests being organized through Facebook in California, New Jersey, and Nebraska, are being removed from the platform on the instruction of governments in those three states because it violates stay-at-home orders, Facebook spokesperson @andymstone tells @donie.

Full story from @donie: “Unless government prohibits the event during this time, we allow it to be organized on Facebook,” @andymstone said. “For this same reason, events that defy government’s guidance on social distancing aren’t allowed on Facebook.” https://t.co/0Ni4pKxx0A

Questions have surrounded exactly which governments gave such alleged “instructions” to Facebook to shut down online event pages. The full CNN report said Facebook made the move after “consulting with officials” in California, New Jersey and Nebraska. Spokespersons for New Jersey Gov. Phil Murphy, a Democrat, and for Nebraska Gov. Pete Ricketts, a Republican, distanced themselves from claims of state action:

The Nebraska Governor’s Office has made no such request. https://t.co/r3gYGhYNbb

Hawley is surely not so obtuse as to believe Facebook must let everything fly on its site because of the First Amendment. That’s not how it works. Maybe, however, he is arguing against government interference with the platform which in turn curtails speech. In that case, the beef is between Facebook and the government in a regulatory sense and between Facebook and its users in a contractual “user agreement” sense. Facebook surely cannot be so bold as to say the government’s suggestions of restrictions  — assuming those conversations did happen — are an infringement on its users’ speech rights. Internet companies are loath to accept even a whiff of a suggestion that they are anything more than passive conduits for the speech of others. Section 230 of the federal Communications Decency Act rewards internet providers which do not speak for their users but which instead merely act as pass-through entities. Extraordinary would be the day that Facebook agrees to subrogate itself in a First Amendment claim by a user against the government for a request to shut down an online “event” page.

Some of the reaction online suggests that Sen. Hawley’s comment led to more confusion than constructive debate.  It also led to at least some not-so-hidden criticism:

I’m sure glad Senator Hawley is one of my Senators and he sent Clair packing.

Seems to me this FB action is illegal and may be the straw that breaks the camel’s back?

I’ll ask @RonColeman, is due process the issue to prosecute here or free speech? Or is there no issue?

A few shot straight back at Sen. Hawley:

You know, as a lawmaker it’d be really useful to learn how the 1st amendment actually works.

And we taxpayers whose money goes to Mizzou Law School where he was paid a salary to teach said Constitutional Law needs to be refunded also.

No. Facebook isn’t the govt. It isn’t the public square. If FB wants to remove things on their platform, they’ve every right to.