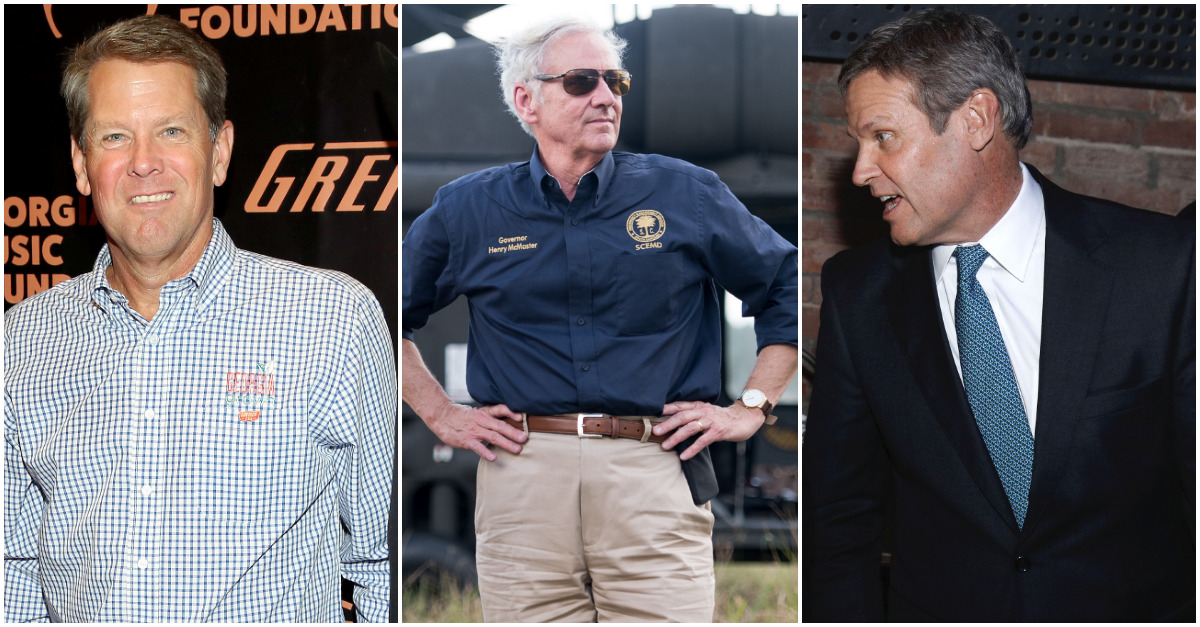 The governors of South Carolina, Georgia, and Tennessee announced Monday that they would relax stay-at-home orders previously issued in response to the novel Coronavirus (COVID-19) pandemic. Critics quickly noted the potentially dire public health implications of those premature moves.

Additionally, select restaurants and theaters will be allowed to reopen if they adhere to strict social distancing guidelines.

“It’s not like large groups of people tend to congregate in close quarters in these kinds of establishments,” sarcastically noted University of Texas Law Professor Steve Vladeck via Twitter.

Other critics were less merciful with their critique of what Kemp’s decisions were almost certain to portend.

“Covid has killed nearly 700 Georgia residents and cases loads are still growing but that won’t stop Brian Kemp who cares more about showing his slavish loyalty to Trump than he does the people of his state,” commented New York Times columnist Jamelle Bouie.

“The fear was always premature ends to social distancing without any monitoring in place to isolate the infected,” added author and The American Prospect journalist David Dayen. “He’s too dumb to know it but this will be bad for Trump–more deaths and a worse economy when it shuts down again.”

“The way you know this is a tactical move betting on limited political fallout, and not a genuine belief in herd immunity, is that the schools are staying closed for the rest of the year,” Vice journalist Paul Blest noted. “The people who make your burgers and cut your hair are expendable. Kemp’s donors’ kids aren’t.”

Schools in the Peach State will remain closed for the rest of year.

As for the statewide shelter-in-place order, Kemp said he will allow for it to expire at the end of the month on Thursday, April 30.

In an Executive Order released Monday which takes effect at 5 p.m., furniture, clothing, jewelry, luggage, sporting goods, book, music and most department stores will be allowed to peddle their wares to customers while being expected to maintain strict social distancing. In effect this means that stores will only be allowed to accommodate five people per 1,000 square feet or 20% of fire code-designated occupancy, whichever is lower.

Georgia: we’re going to be the first to do a dumb thing, too early

McMaster’s order, however, explicitly keeps shuttered businesses where close contact is necessary for commerce–such as gyms, barber shops and hair salons–precisely the same sorts of businesses that will be allowed to reopen soon in Georgia.

The fact that Kemp is permitting such close contact businesses to open soon probably explains why he received the lion’s share of oftentimes withering criticism on Monday afternoon.

Tennessee Governor Bill Lee also signaled an end to the Volunteer State’s safer-at-home order which allows the directive to lapse at the end of April. Lee insisted that social distancing measures must be maintained to keep the deadly contagion in check.

“As we open our economy, it will be more important than ever that we stay committed to that, lives and livelihoods depend on it.” Lee said. “For the good of our state, social distancing must continue but our economic shutdown cannot.”

Lee has yet to provide guidance on what types of business will be allowed to open as early as next week.

“Our Economic Recovery Group is working with industry leaders around the clock so that some businesses can open as soon as Monday, April 27,” Lee said. “These businesses will open according to specific guidance that we will provide in accordance with state and national experts in both medicine and business.”

Tennessee’s decision was also met with some hostility online as well:

Tennessee & Georgia are just guinea pigs. We’re Trump’s experiment. This is a terrible decision @GovBillLee You definitely need to be replaced ASAP

Bill Lee endangering this entire state. The past month of shelter in place will be all for not. Dipshit

We have to re-open the economy. But if this is done in a rushed, haphazard manner that leads to a resurgence of exponential growth, it will wipe out the gains of the last month and make it harder to re-open in the strong way we need. 3/x