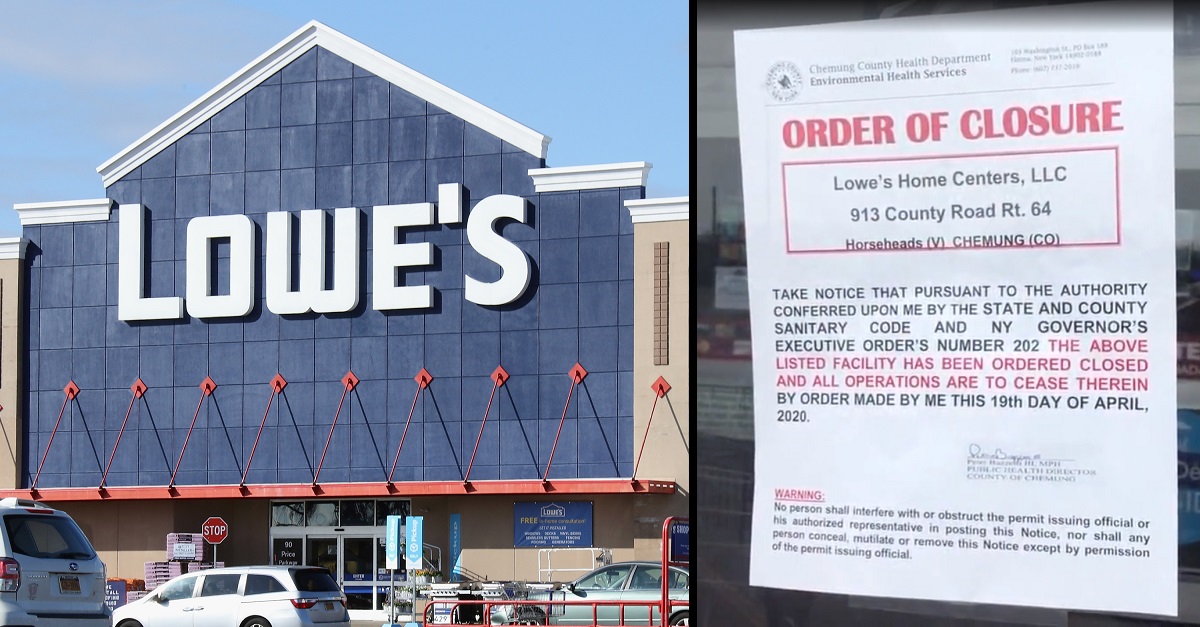 A county executive in Upstate New York shut down a Lowe’s home improvement store over the weekend after what he called “multiple warnings (verbal & written)” and “continual violations” of social distancing orders.

Local television station WETM-TV reported “a heavy police presence” outside the store Sunday afternoon on County Route 64 in Big Flats, N.Y., about an hour west of Binghamton along the Pennsylvania border. Competitor WENY-TV described the presence as a “couple of Chemung County Sheriff’s deputies” at the scene “asking people to leave the store.” Employees were allowed to stay.

In a news release Sunday, the county executive said he took the move to close the store in consultation with county health officials.

“Essential businesses have a responsibility to make sure their customers and employees are kept as safe as possible from contracting or spreading the Coronavirus,” said County Executive Christopher J. Moss in a news release. “I want to make it clear that it is not the intent of the County to pursue closures, fines and possible arrests, but business who have been allowed to remain open, as they are designated as ‘essential’ must follow the guidelines set forth by the state.”

The county executive said the company would have to submit a plan to stay open, and such a plan was almost immediately forthcoming according to an updated announcement from the county. A government affairs representative from Lowe’s said, and the county agreed, that an associate would be posted at the store entrance; that technology would be used to track the number of people inside; store traffic would be limited to four customers per 1,000 square feet of space; and that security would be hired to ensure crowds were controlled.

The store was said to be allowed to reopen on Monday morning.

Numbers posted on the county executive’s Facebook page Sunday indicate that the county has 77 confirmed cases of COVID-19.  One person is hospitalized; 31 have recovered; one resident has died, the numbers say. About 83,500 people live in the county, which includes Elmira, New York.

[Image of Lowe’s by Bruce Bennett/Getty Images. Image of closure notice via WETM-TV.]