Biden Has No Legal Authority for an Actual National Mask Mandate 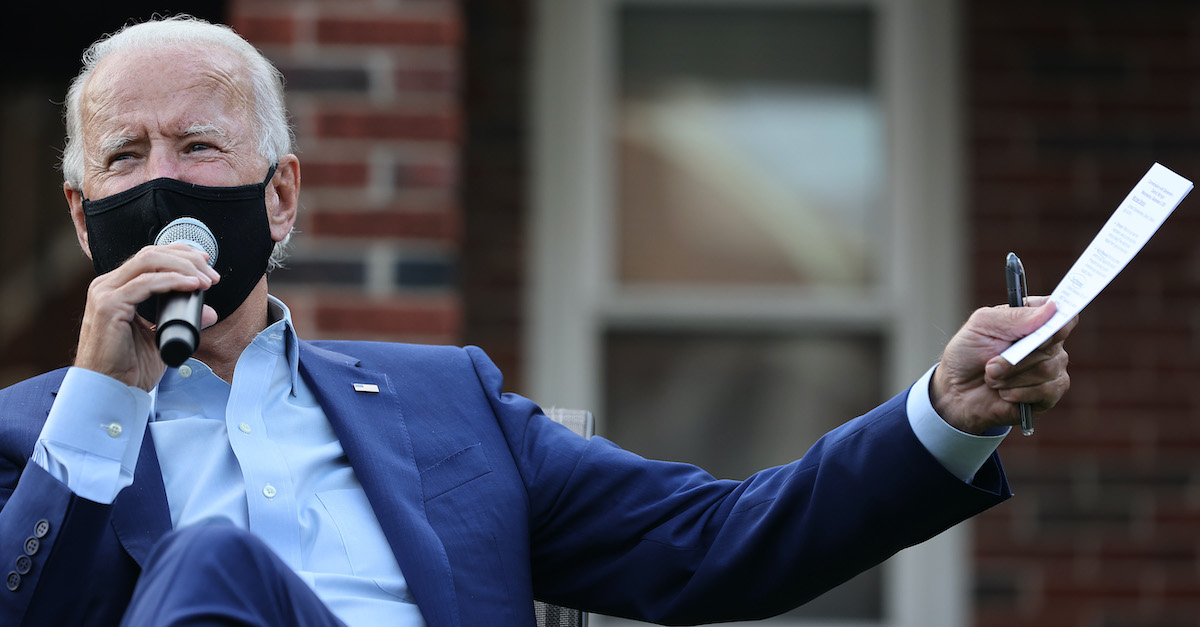 President-elect Joe Biden released his 100-day plan intended to combat the spread of the coronavirus (COVID-19) on Tuesday evening. That three-part proposal, however, features at least one unworkable premise: “Everyone wears a mask.”

Today, I’m announcing key COVID-19 priorities for the first 100 days of my administration:

With these steps, we can change the course of the disease and change life in America for the better.

Biden’s proposed national mask mandate was not elaborated on in the initial offering but the incoming administration made an effort to clarify that prong of their plan after several hours of nonstop and trenchant criticism online; from various shades of political opinion.

“My first 100 days is going to require–I’m going to ask for a masking plan–everyone for the first 100 days to wear a mask,” Biden explained in a video posted on Twitter late Wednesday morning.

The soon-to-be 46th president elaborated: “It will start with my signing an order on day one to require masks where I can under the law, like federal buildings, interstate travel on planes, trains, and buses.”

A November fact check by CNN outlines the basic issue:

There appears to be no legal authority that would allow a US president to enact a nationwide mask mandate. There are exceptions where the executive’s authority could allow for such a mandate, such as on federal property, though a nationwide rule would almost certainly be challenged in court.

The president can certainly request a more detailed masking plan from his administration. He can obviously plead with the public to comply–which he also says he will do. Additionally, the president can request that state governors institute their own mask mandates which are very likely to survive constitutional scrutiny–which his statement also goes on to say is, in fact, part of the plan. That, of course, would leave many GOP governors who will certainly refuse to play along.

But with the presence of such caveats and the reliance on voluntary compliance from Republican partisans–many of whom are adamantly opposed to mask-wearing based on alleged liberty concerns–the “mandate” becomes nothing like a mandate at all, which appears to be at least tacitly acknowledged by the incoming administration.

“The president cannot impose a nationwide mask mandate, and Biden knows that,” South Texas College of Law Professor Joshua Blackman told Law&Crime in an email. “I am more skeptical about a mandate on certain forms of interstate travel. Really, that approach would do little to prevent spread. Most people in federal buildings are already masked. And I don’t know how many people still ride interstate trains and buses.”

But even a nationwide mask mandate passed by Congress would run into both constitutional and practical hurdles.

For one, there’s the conservative-dominated Supreme Court that would almost certainly find fault here.

According to Chief Justice [John] Roberts, in a portion of the [landmark Obamacare] opinion not joined by other justices but largely echoed by the view of the four dissenting justices, the Commerce Clause does not empower Congress “to regulate individuals precisely because they are doing nothing.” While it is uncertain whether this conclusion constitutes binding precedent, it suggests that a broad mandate (e.g., one that generally requires individuals to wear masks) maybe particularly susceptible to challenge because such a mandate could be construed as compelling individuals who are “doing nothing” to engage in an activity—mask wearing—that is not even a commercial activity.

And then there’s the enforcement problem. Unlike, say, France, the U.S. does not have a national police force and even in the event that Congress were to pass a national mask mandate that survived the exacting scrutiny of the Roberts Court, there’s simply no way a national mandate could possibly be enforced–practically or legally.

In general, enforcing mask mandates has been a challenge even for states, which can leverage their state and local law enforcement apparatus to enforce such mandates (typically through ticketing and fines). This general enforcement apparatus, however,is not available to the federal government, which lacks states’ general police power and, as discussed above, cannot commandeer state officers to carry out federal directives, risking enforcement gaps in the context of federal public health regulations.

So, what is Biden’s statement really saying? What does his overall plan actually promise? Not very much.

The contours of Biden’s 100-day plan mostly jibe with the current approach endorsed by President Donald Trump and his allies on Capitol Hill: an aggressive vaccination schedule and similarly aggressive efforts to put children and teachers back in school–with the only major change being that Biden will aggressively push and plead for mask-wearing.

At root, the initial promise of a national mask mandate and the suggestion that he can use the power of the executive so that “[e]veryone wears a mask” quickly loses sheen due the absolute lack of legal authority behind an honest-to-goodness mandate and the piecemeal, largely voluntary, approach that Biden’s actual plan relies upon.