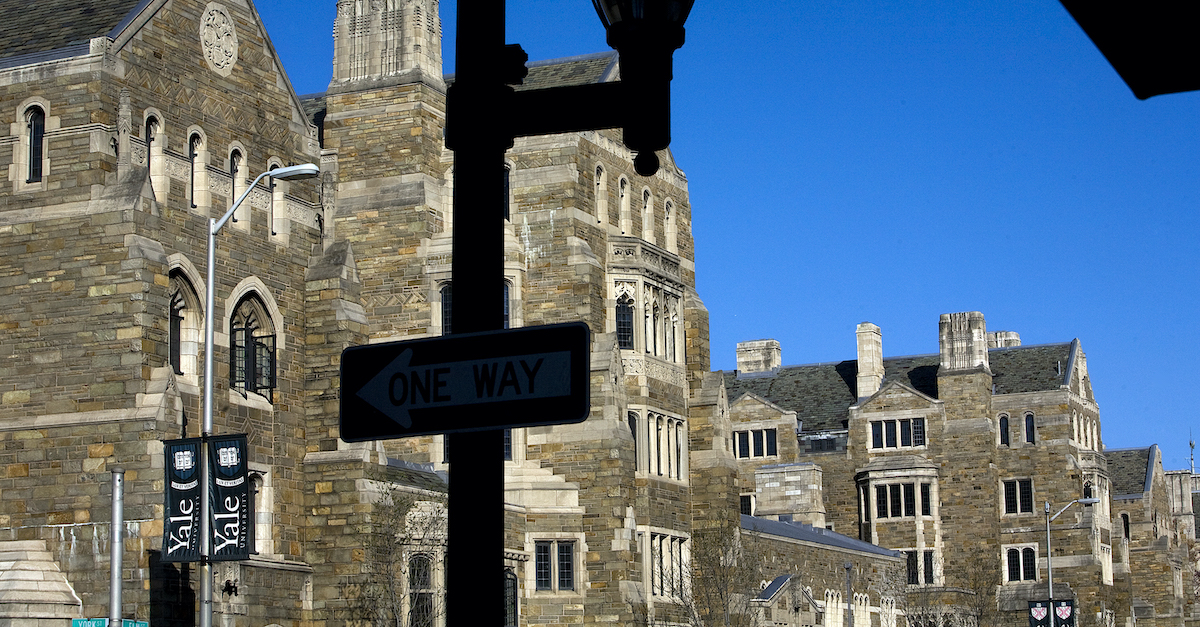 The U.S. Department of Justice on Thursday accused Yale University of violating civil rights laws through the “oversized” use of race as a criteria for admissions to the elite institution.

The DOJ said in a press release that its findings were “the result of a two-year investigation in response to a complaint by Asian American groups concerning Yale’s conduct.” Specifically, the DOJ alleges that “race is the determinative factor in hundreds of admissions decisions each year.”

The findings of the probe were outlined in a letter the DOJ sent to Yale on Thursday. The letter was signed by Assistant Attorney General Eric Dreiband of the DOJ’s civil rights division.

“Yale’s discrimination is long-standing and ongoing,” Dreiband wrote in his opening paragraph. After explaining a lengthy data analysis, Drieband explained the crux of the DOJ’s complaint. Here are some of the DOJ’s concerns:

Further into the letter:

Our investigation indicates that Yale’s diversity goals appear to be vague, elusory, and amorphous. Yale’s use of race appears to be standardless, and Yale does virtually nothing to cabin, limit, or define its use of race during the Yale College admissions process.

The data suggested that Yale illegally used race as a “predominant criteria” in admissions decisions, according to the DOJ:

Yale’s oversized use of race favors some applicants because of their race and correspondingly disfavors other applicants because of their race, with most Asian American and White applicants unduly bearing the brunt of the preferences Yale grants to its racially-preferred applicants. Yale grants racial and national origin preferences in favor of African American, Hispanic, and certain other applicants and disfavors most Asian American and White applicants. Yale’s use of race cannot satisfy the narrow tailoring requirement because Yale unduly burdens individuals who are not members of the favored racial and ethnic groups.

The letter goes on to say that “Yale’s race discrimination dates back more than four decades, to at least the 1970s.”

“There is no such thing as a nice form of race discrimination,” Dreiband said in a statement. “Unlawfully dividing Americans into racial and ethnic blocs fosters stereotypes, bitterness, and division. It is past time for American institutions to recognize that all people should be treated with decency and respect and without unlawful regard to the color of their skin.”

“As a condition of receiving millions of dollars in taxpayer funding, Yale expressly agrees to comply with Title VI of the Civil Rights Act of 1964, a cornerstone civil-rights law that prohibits discrimination on the basis of race, color, or national origin in programs and activities that receive federal financial assistance,” the DOJ’s press release said.

Dreiband’s letter asks Yale to comply with the DOJ’s demands to alter its admissions processes “by voluntary means.”

“To that end, Yale must agree not to use race or national origin in its upcoming 2020-2021 undergraduate admissions cycle, and, if Yale proposes to consider race or national origin in future admissions cycles, it must first submit to the Department of Justice a plan demonstrating that its proposal is narrowly tailored as required by law,” the letter says.  “Any such proposal should include an end date to Yale’s use of race.”

If Yale does not comply voluntarily, the letter threatens litigation.

Though Yale is a private institution, it must legally comply with federal civil rights laws because it receives taxpayer funding.

READ the full DOJ letter to Yale below:

DOJ Letter to Yale re: Race-Based Admissions by Law&Crime on Scribd

Legal citations and some internal punctuation have been omitted in some quotes.