Authorities Make Arrest in the Murder of LeGend Taliferro, a 4-Year-Old Boy Who Was Shot in His Sleep 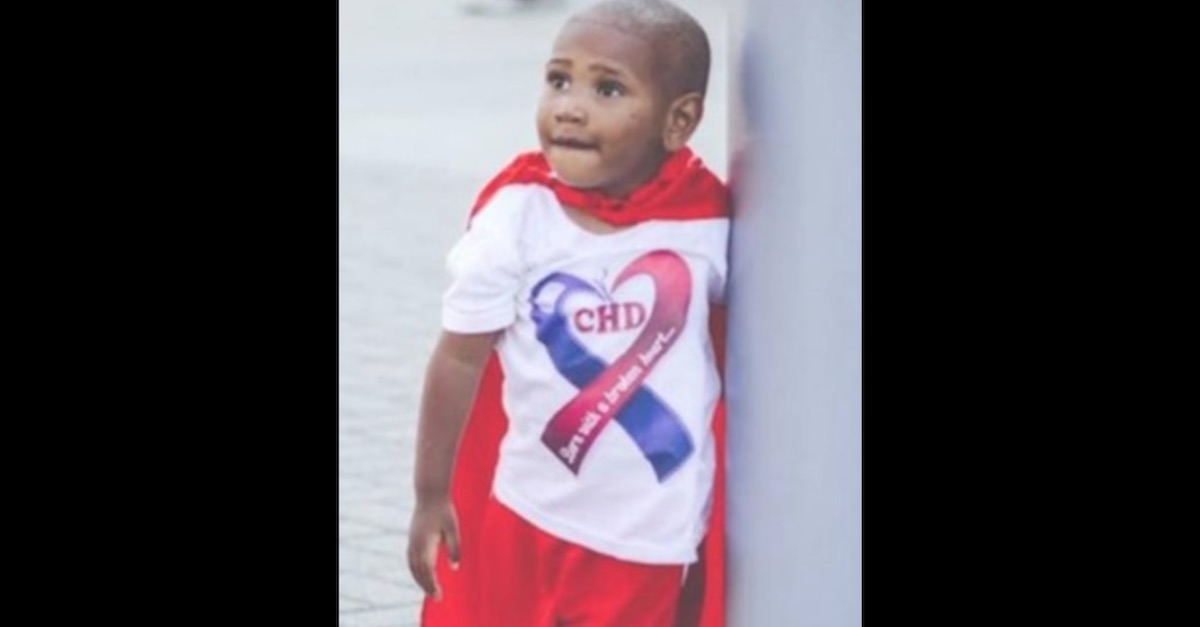 The U.S. Department of Justice announced on Thursday that a 22-year-old man was arrested in the murder of 4-year-old LeGend Taliferro, who was shot and killed as he slept at his father’s home on June 29 in Kansas City, Missouri.

The suspect has been identified as Ryson B. Ellis, who was arrested in Tulsa on Thursday morning.

“22-year-old Ryson B. Ellis has been has been charged with the murder of 4-year-old LeGend Taliferro, who was killed while asleep in an apartment June 29. LeGend is the namesake of #OperationLeGend. Great work by detectives getting justice for his family,” Kansas City police announced on Thursday afternoon.

Jackson County Prosecutor Jean Peters Baker said that Ellis fired a bullet into the residence through a “privacy fence and a sliding glass door” and shot Taliferro. A woman who was in the residence at the time of the shooting told police that she had a son with Ellis; she alleged that the suspect physically abused her, prosecutors say:

According to court records, Kansas City police responded in the early morning hours of June 29, 2020, to the 1600 block of Bushman in the Citadel Apartments regarding a shooting. Someone had fired gunshots into apartment 123 from an area behind the apartment, shooting through a privacy fence and a sliding glass door. The victim was the young child, Legend M. Taliferro, who was asleep in the residence. A witness told police that the suspect had a “fade cut” and facial hair on the chin. This generally matches the description of the defendant.

A woman, according to the court records, was in the apartment at the time of the shooting and she told police she had a son with the defendant and he had assaulted her a few days before the shooting. The witness later received threatening social media messages from the defendant. The assault caused members of her family to confront the defendant. One of the family members is the father of Legend Taliferro and he resided at the apartment where the young victim was later shot. A suspect vehicle was captured on surveillance video from the night of the shooting and police determined it was a rental vehicle. Rental car records confirmed it was rented on June 23 and not returned until July 3. A witness who stated she drove the vehicle the night of the fatal shooting said the defendant got out of the vehicle near apartment 123, then she heard gun shots. He came running back to the car. She said she didn’t find out until later someone had been killed.

The FBI had been offering a reward as high as $25,000 for any information leading to an arrest. Authorities said that police responded to the shooting in the morning on June 29. Taliferro’s father drove the child to a hospital, but LeGend did not survive. He died at the hospital.

According to KSHB, LeGend survived multiple open heart surgeries when he was younger.

“Today’s arrest of LeGend Taliferro’s suspected murderer marks a significant step forward in his case and illustrates the potential of Operation Legend more broadly. The arrest and state charges resulted from cooperation among Kansas City police officers, the FBI, and U.S. Marshals,” Barr said. “This development is a model for joint efforts to solve crimes and reduce violence in other cities. I thank the state and local law enforcement officers who helped make possible this important step in bringing justice to LeGend, to his family, and to his community.”

“Although LeGend’s suspected murderer has been arrested, Operation LeGend will go on,” Barr concluded. “Inspired by this success, federal law enforcement will continue working tirelessly to support state and local partners in our shared mission to keep the American people safe and enforce the rule of law.”

The Kansas City Police Department has credited Operation LeGend for the arrests of at least one dozen murder suspects.

Ellis faces charges of second-degree murder, unlawful use of a weapon and two counts of armed criminal action. Prosecutors want the defendant to be held without bond.