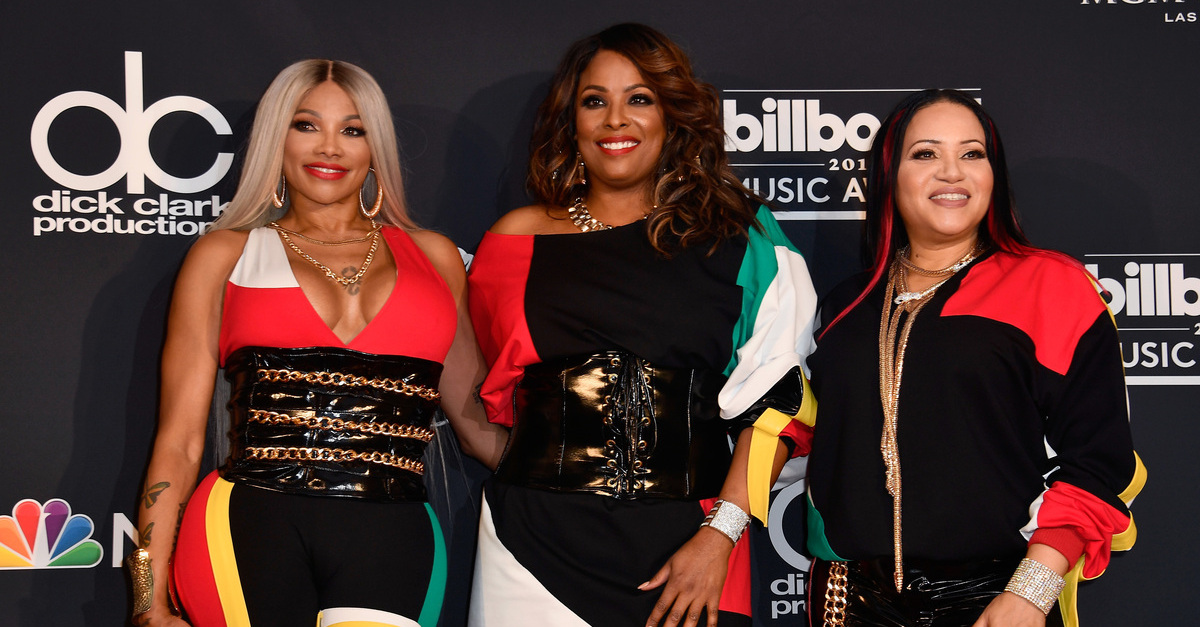 Looks like Spinderella won’t have her day in court with Salt-N-Pepa after all. A federal court in Dallas ordered the lawsuit between DJ Spinderella and Cheryl “Salt” James and Sandra “Pepa” Denton to mediation.

The dispute between Deidra Roper a/k/a Spinderella and the two other members of the group is an 80s music success story gone sour. Roper joined Salt-N-Pepa in 1987 at age 16, but (after much success) was terminated in January 2019. Spinderella had posted a promotion of the May 2019 New Kids On The Block Mixtape Tour, but then announced to her fans via Instagram that she wouldn’t be performing with the group after all:

I’m deeply saddened to share with all the #SaltnPepa and #Spinderella fans that I will not be performing on the #NKOTB Mixtape Tour. Despite my participation in promoting the tour and being highly publicized as one of the acts, in January 2019 I received a ‘termination’ email from #SaltnPepa excluding me from performances with the group. It was my expectation, after making that decision, that they would also take responsibility for sharing the news with the public and other affected parties. It has been months now with no mention. Out of love for my fans and a commitment to upholding a standard of professionalism, I’ve taken it upon myself to let everyone know. I refuse to participate in misleading fans, ticketholders, and others who — based on all the advertising — were anticipating seeing the iconic #SaltnPepa and #Spinderella trio. So, I’m making it clear now. Please know you will have the opportunity to see me this summer in many other projects and activities I’ll be participating in and I look forward to seeing you all then.” Thank you,
Spinderella 😘

Then, in July 2019, Spinderella sued her former bandmates for fraud, breach of contract, and trademark infringement, alleging she was owed over $600,000 in unpaid royalties and lost compensation from participating in VH1’s The Salt-N-Pepa Show. No sooner was the lawsuit filed, however, did a federal judge order the trio to mediation to resolve their divorce-like dispute.

The ruling to send the case to mediation will likely limit the drama; instead of focusing on salacious details, accusations, and wrongdoing, the three will be shepherded toward a mutually-agreeable resolution. It is likely the details will remain completely private.

Billboard reported reactions by Salt-N-Pepa to the mediation ruling:

We are grateful for the judge’s ruling as Salt-N-Pepa have been extremely generous to Spin over many decades and attempted to settle what amounts to a divorce, both peacefully and without rancor. Unfortunately, Spin and her legal team adopted a scorched earth approach that brought unnecessary attention to a business dispute that all along could have, and should have, been settled amicably and privately.

Spin’s lawyer, however, tried to, well, spin things more positively for his client:

…the parties were ordered by the Court to mediate this case — further substantiating Spinderella’s legal and equitable rights against the Defendants to protect her brand and reputation, as well as her right to be compensated for her work.