Smartmatic Sues One America News and Newsmax for Defamation

Smartmatic Adds to Mountain of Litigation Against Right-Wing Cable News Networks, Sues One America News and Newsmax for Defamation 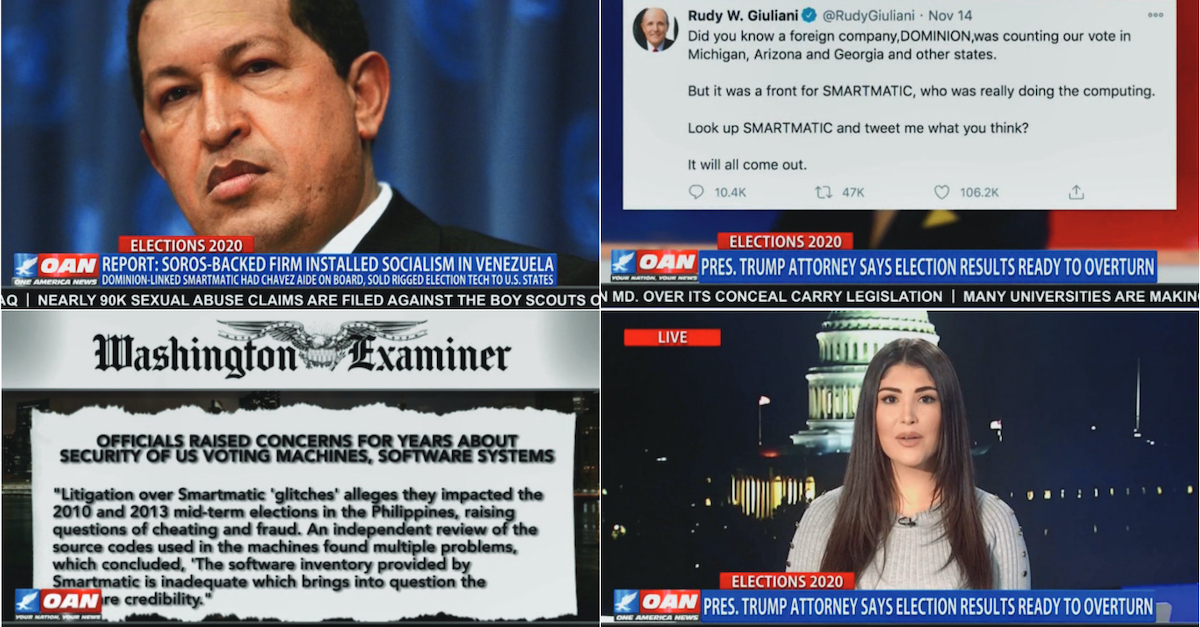 Smartmatic embedding still frames from OANN broadcasts in its defamation lawsuit against the right-wing network.

“The first time it happened could be a mistake,” the 197-page federal complaint begins. “The second, third, fourth and fiftieth times it happened were intentional choices. OANN had every opportunity to do the right thing after the 2020 election for President and Vice President of the United States. It could have reported the truth. Instead, OANN chose to do the wrong thing every time. It reported a lie.”

“It Will Cross Legal and Ethical Lines to Climb the Ladder”

Smartmatic filed the lawsuit against OANN in the District of D.C., and the company separately sued Newsmax in Delaware Superior Court, framing the network’s conduct as a quest to lure Fox viewers.

“It is not easy to climb the ladder and get to the top,” the complaint against Newsmax begins. “It is even harder to climb if one is following the rules when others are not. Newsmax has long wanted to ascend the viewership ladder. It has now shown that it will cross legal and ethical lines to climb the ladder and push off the one at the top”

“Despite claims to provide viewers with honest, unbiased reporting, these outlets victimized Smartmatic by spreading false information about the company following last year’s election, all in their efforts to increase viewership and revenue,” Connolly wrote.

The lawsuit, captioned as Smartmatic USA Corp. v. Herring Networks, Inc. (OAN’s corporate name) and currently docketed in the U.S. District Court for the District of Columbia, does not cite a figure for compensatory or punitive damages sought.

Judging from prior lawsuits, however, and the company’s calculations in its complaint, that number can be enormous.

“While Newsmax has yet to receive or review the Smartmatic filing, Newsmax reported accurately on allegations made by well-known public figures, including the President, his advisors and members of Congress, as well as reporting on Smartmatic’s claims in its defense,” Rizzo told Law&Crime in an email. “Smartmatic’s action against Newsmax today is a clear attempt to squelch the rights of a free press.”

In December, Smartmatic threatened OAN, Fox News, and Newsmax with legal action for airing what the company described as a “disinformation campaign” following former president Donald Trump’s defeat in the 2020 election.

As Reuters reported, “Smartmatic helped tally votes only in left-leaning Los Angeles County, where Biden’s victory was never in doubt.” The company’s lawsuit expresses pride in its work in LA county that year and emphasizes their limited role int he general election.

Trump surrogates claimed otherwise on the conservative TV circuit. Dominion, another voting machine giant vilified by Trump supporters, also sued OAN in August, claiming the network engaged in a “race to the bottom” in peddling conspiracy theories palatable to their audience.

“During and after the November 2020 election, OAN saw a business opportunity,” Dominion’s lawyers alleged in their lawsuit. “Spurred by a quest for profits and viewers, OAN—a competitor to media giant Fox—engaged in a race to the bottom with Fox and other outlets such as Newsmax to spread false and manufactured stories about election fraud. Dominion quickly became the focus of this downward spiral of lies, as each broadcaster attempted to outdo the others by making the lies more outrageous, spreading them further, and endorsing them as strongly as possible.”

Both Dominion’s lawsuit and Smartmatic’s are pending in the District of Columbia.

Fox filed a motion to dismiss Smartmatic’s lawsuit in February.

“As the story unfolded, and as Smartmatic denied many of those allegations, Fox covered the denials too, including by reporting Smartmatic’s position, offering Smartmatic the opportunity to tell its side, and soliciting the views of disinterested third parties on the veracity of the allegations against Smartmatic, sometimes in a debate-like format,” the court documents said. “In short, FOX did exactly what the First Amendment protects: It ensured that the public had access to newsmakers and unquestionably newsworthy information that would help foster ‘uninhibited, robust, and wide-open’ debate on rapidly developing events of unparalleled importance.”

The lawsuit against OAN has been assigned to U.S. District Judge Carl J. Nichols, who is also presiding over Dominion’s lawsuits against Fox News, MyPillow, Giuliani and others, which have been designated as related.

Read the complaints, below: