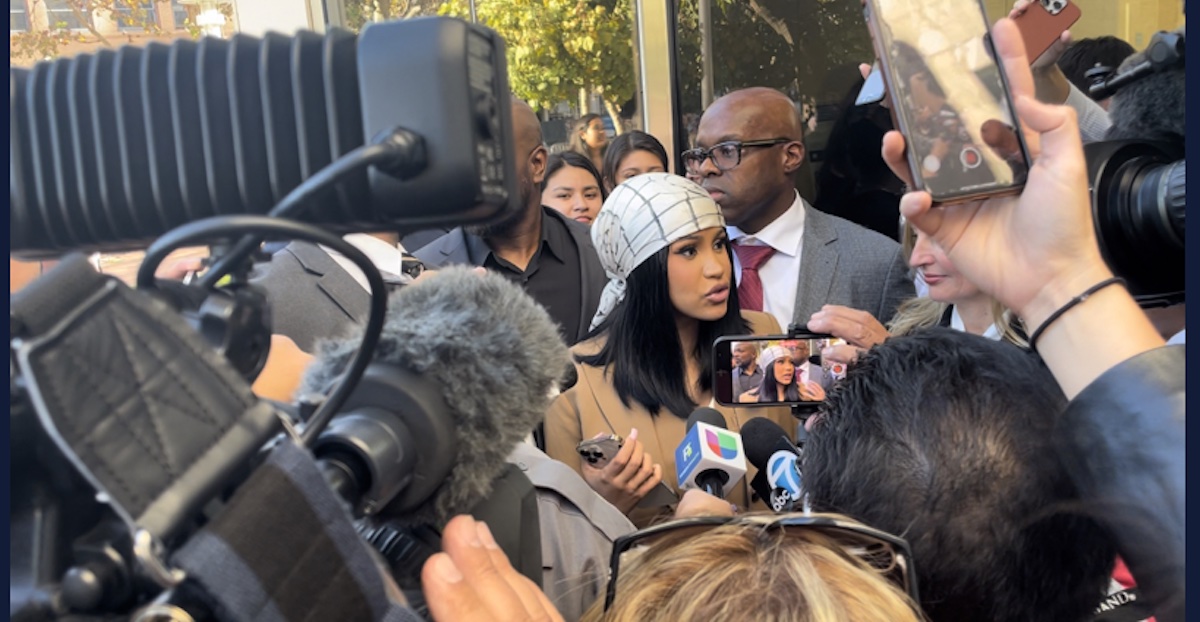 Cardi B speaks with reporters and fans outside the federal courthouse in Santa Ana, California, on Friday, Oct. 21, 2022. After four days of trial, a jury deliberated 90 minutes before clearing her of a liability in a lawsuit over the cover art to her mixtape “Gangsta Bitch Music, Vol. 1.” (Photo: Meghann M. Cuniff/Law&Crime)

A federal jury on Friday sided with Cardi B in a lawsuit accusing her of misusing a man’s tattoo on the cover of her 2016 mixtape “Gangsta Bitch Music, Vol. 1,” deliberating about 90 minutes before rejecting all claims against her.

The jury concluded Kevin Michael “Mike” Brophy hadn’t proven his claims that Cardi misappropriated Brophy’s likeness on the cover, nor had he proven that her former management company KSR Group LLC or her cosmetics company Washpoppin’ did. They also concluded that Brophy didn’t prove Cardi or the companies portrayed Brophy in a false light.

Brophy sued the superstar rapper, whose legal name is Becalis Almanzar, for $5 million in 2017 after her team ignored a cease-and-desist letter from his lawyers about the mixtape cover and its use of Brophy’s distinct back tattoo. Trial opened Tuesday in the Central District of California’s Santa Ana courthouse, with Cardi drawing a crowd of fans to the courthouse that greeted her as she exited today, beaming and with her security guard and lawyers.

Before she left the courtroom, Brophy shook her hand and told her, “At the end of the day, I do respect you as an artist.”

Brophy told Cardi they have mutual friends; she asked him who and he gave a couple names.

“If I didn’t stand up and fight I would have never known,” Brophy said. He added, “This is so far out of my wheelhouse. I didn’t know which way to turn. I wasn’t like, ‘Oh, she’s after me particularly.’ I just didn’t know where to turn.”

The jury forewoman also spoke with Cardi in the courtroom after the verdict. The women agreed they’d never forget each other.

Raphael sat at the back defense table during trial as the owner of KSR Group, and he spent much of Thursday on the witness stand, testifying emotionally about Cardi’s meteoric rise to fame and defending the mixtape cover art as protected under the First Amendment.

After the verdict, he shared a slap-back brotherly hug with Timm Gooden, the graphic artist who used photoshop to transform a photo of Cardi posing in the back seat of a car with a male model who appears to be giving her oral sex into the cover art of “Gangsta Bitch Music, Vol. 1.”

He used portions of a photo of Brophy’s tattoo he found online, but Cardi’s lawyers emphasized Cardi’s security guard affectionately clutch Gooden’s shoulders and said, “That’s what I’m talking about.”

Outside court, a group of teenagers from a high school near the courthouse crowded Cardi as she tried to exit the building with her lawyers and and security. She briefly spoke with TV reporters as people spilled out the open courthouse doors and teens shouted adorations.

“Really great lawyers on my team to the plaintiff’s team. Everybody was just amazing. It was a very interesting case, and I feel like everybody learned a lot,” she said. She also said, “I’m beyond grateful. Like, I even shed a tear, and I really don’t be crying.”

The above photo is from Thursday. I didn’t get a shot of Cardi going into today, but there’s no way I’m as disappointed about not seeing her go in as young Tristan undoubtedly is, who may be going to Homecoming alone tonight. pic.twitter.com/5kEgDF41iA

Early Friday, about 30 teens ran into the courthouse lobby screaming and taking pictures and video of Cardi as she went through the security check station with her guard and her lawyer. They left before any tried to pass through the checkpoint themselves but after angering the courthouse security staff.

A married father of two, Brophy lives in Costa Mesa, California, and works for a surfing lifestyle company. His tattoo was inked by the renowned tattooist Tim Hendricks, who first alerted him to the fact that a portion of his back piece was featured on the “Gangsta Bitch Music, Vol. 1” cover. The text message he sent to Brophy was evidence in trial, with Hendricks telling Brophy someone had ripped off the tattoo “unless you grew hair.” Cardi referenced it in her testimony while emphasizing everyone believes it’s not actually Brophy in the photo.

His lawyers, Barry Cappello and Larry Conlan, presented it to jurors as a privacy issue. Conlan said in his two-hour closing argument Friday morning that Brophy should not have to be ridiculed with questions like, “Hey bro, how’s Cardi B taste?” Conlan said. “Nobody wants that in their life. He certainly doesn’t.”

Brophy should not have to be ridiculed with questions like, “Hey bro, how’s Cardi B taste?” Conlan said. “Nobody wants that in their life. He certainly doesn’t.”

“His likeness is being misappropriated without his consent, over his objection and in a way that is grossly offensive to him and that goes against everything he stands for,” Conlan said.

Cardi’s lawyer Peter Anderson gave the closing for her side, arguing mixtape cover uses parts of Brophy’s tattoo in a way that transforms them into another piece of art and is protected by the First Amendment. He also questioned how Brophy has been harmed, saying his lawyers have been speaking in hyperbole by saying Cardi has ruined his life for five years.

“Calling it hyperbole does not do that justice,” Anderson told the jury.

No one has testified that Brophy “is readily identifiable by those few remaining elements,” Anderson said. “If no one recognizes him from the artwork, then his likeness cannot have been appropriated.”

Anderson displayed closeups of Brophy’s tattoo and Cardi’s mixtape cover. “You really can’t make out anything in the artwork” and if jurors can see the woman “your eyesight is better than mine,” Anderson said. pic.twitter.com/peeeLHOXxp