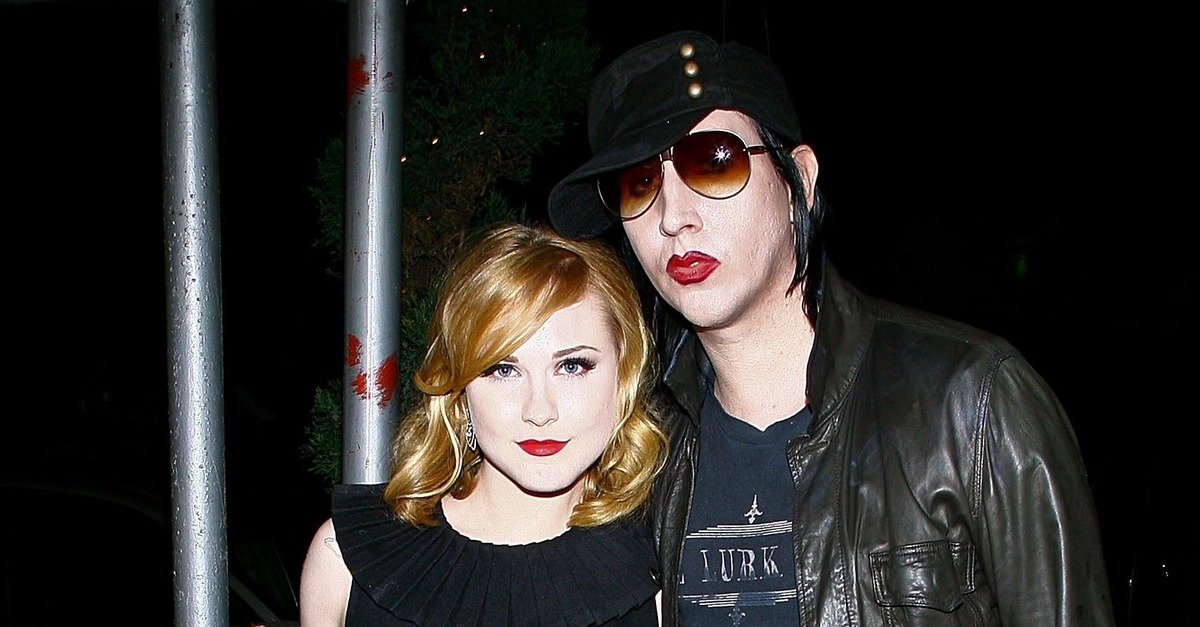 Actress Evan Rachel Wood and musician Marilyn Manson arrive for the after party for a special screening of “Across The Universe” at Bette on September 13, 2007 in New York City.

Evan Rachel Wood, the 33 year-old star of HBO’s Westworld, unveiled the identity of the rapist whose brutal crimes she detailed to a congressional subcommittee almost three years ago. According to Wood, she was repeatedly raped and abused by her former fiancé, musician Brian Warner —known publicly as Marilyn Manson.

In an Instagram post on Monday morning, Wood said,“The name of my abuser is Brian Warner, also known to the world as Marilyn Manson.”

“He started grooming me when I was a teenager and horrifically abused me for years,” she continued, “I was brainwashed and manipulated into submission. I am done living in fear of retaliation, slander, or blackmail. I am here to expose this dangerous man and call out the many industries that have enabled him, before he ruins any more lives. I stand with the many victims who will no longer be silent.”

Wood testified before a House Judiciary Subcommittee in 2018, sharing her own history of sexual assault, and supporting an effort to pass the Sexual Assault Survivors Bill of Rights. During her testimony, Wood said, “My experience with domestic violence was this: Toxic mental, physical and sexual abuse which started slow but escalated over time, including threats against my life, severe gaslighting and brainwashing, waking up to the man that claimed to love me raping what he believed to be my unconscious body.”

Wood continued, saying she was subjected to “sick rituals of binding me up by my hands and feet to be mentally and physically tortured until my abuser felt I had proven my love for them.”

Wood also said that afterward, she was also raped by another individual. Being raped once, explained Wood, made it easier to be raped again, because her “body instinctively knew what to do: disappear, go numb, make it go away.”

Wood said as a result of the severe sexual abuse, she suffered from post-traumatic stress disorder and attempted suicide twice.

After Wood posted on Instagram, four other women commented, saying that they too were sexually assaulted by Warner. Those women are Ashley Walters, Sarah McNeilly, Ashley Lindsay Morgan, and Gabriella (who listed no last name).

In a 2009 interview with SPIN, Warner discussed his relationship with Wood. First, though, Warner told the interviewer that he’d just made a new piece of modern art by photographing used condoms thrown at a mirror. Warner described the “art” as “a piñata of disease and babies and confusion,” and said “It’s literally just dripping down as we speak.” He told the interviewer, “I just wanted to make sure that you know that I can perform. I want to make sure that my sexual prowess is established here,” and suggested that the photo be used on the cover of the magazine.

When the conversation turned to Warner’s failed relationship with Wood, Warner recounted a day in which he called Wood 158 times, each time, cutting his face and hands with a razorblade.

“I wanted to show her the pain she put me through,” Warner said. “I have fantasies every day about smashing her skull in with a sledgehammer.”

An attorney for Brian Warner did not immediately respond to Law&Crime’s request for comment.