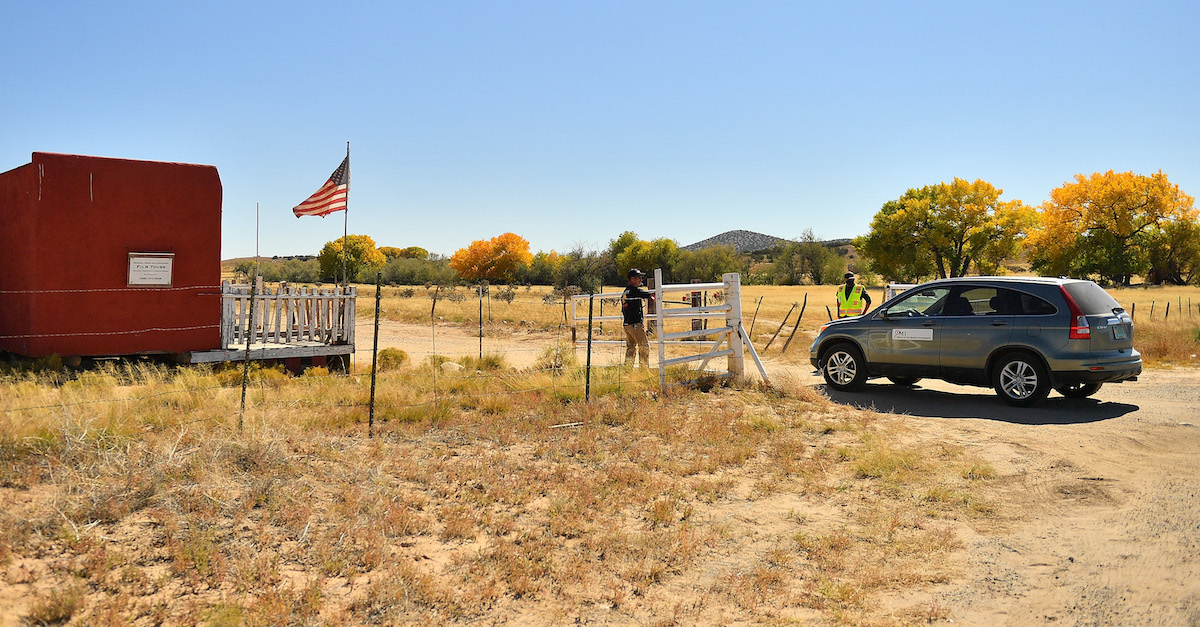 A vehicle from the Office of the Medical Investigator enters the front gate leading to the Bonanza Creek Ranch on October 22, 2021 in Santa Fe, New Mexico. (Photo by Sam Wasson/Getty Images)

A search warrant filed by the Santa Fe County Sheriff’s Department is providing new details about a fatal shooting at the hands of actor Alec Baldwin on a New Mexico film set.  A cinematographer died Thursday; the film’s director was injured when a live round ejected from what has been described as a prop gun.

A copy of the warrant obtained by Albuquerque ABC affiliate KOAT said three prop guns were on a cart during a rehearsal.  According to the document, an assistant director handed one of the guns to Baldwin, announced that it was a “cold gun,” and that Baldwin subsequently fired the weapon.

The assistant director’s proclamation was meant to indicate that the gun contained no live rounds and was safe to fire on set, the television station reported.

The assistant director who made the announcement that the gun was “cold” also told investigators he had no idea there were live rounds in the weapon when he gave it to Baldwin, both KOAT and the Associated Press reported, citing the warrant.

The document reportedly says investigators collected some of Baldwin’s clothing as evidence because it appeared to contain blood stains.  Also seized were the gun from which Baldwin fired the bullet, other prop guns, and ammunition.

Investigators sought the warrant Friday so they could continue to “document the scene at the ranch where the shooting took place,” the AP explained.

The Santa Fe New Mexican reported that sheriff’s deputies were combing the property for evidence and were attempting to determine whether the shooting was recorded.  The local newspaper identified Dave Halls as the assistant director who handed the gun to Baldwin.  It further said that the film’s armorer, Hannah Gutierrez, had prepared the cart of guns before Halls removed one of the weapons for Baldwin’s use.  The newspaper and several other media sources said neither Halls nor Gutierrez could be reached for comment.

The New York Times, also citing the warrant, said Gutierrez took the gun after Baldwin fired it and removed the spent shell casing.  Baldwin took off his costume, returned to his street clothes, and gave his costume to an evidence technician.

KOAT was one of several New Mexico television stations which obtained 911 calls connected to the shooting.

The dispatcher asked the caller to remain on the line.  The caller said someone else may also have been dialing 911 “for two ambulances” at the same time she was on the phone.

“Our director and our cameraman — camerawoman have been shot,” the caller eventually said to the dispatcher while talking to some people on the scene.

“So, was it loaded with a real bullet?” the dispatcher next asked after one lengthy pause.

“I cannot tell you that,” the caller said.  “We have two injuries from a movie gun shot.”

The dispatcher indicated she was dispatching rescue crews “out there” to the scene and implored the caller to remain on the line.

“No, no, no, I’m a script supervisor,” the caller said — apparently to someone else on the scene.

The caller said she and others ran from the immediate area where the shooting occurred and were conglomerating outside.

The dispatcher then asked how many people had been injured.

“Two that I know of,” the caller repeated.  “I was sitting, we were rehearsing, and it went off, and I ran out.  We all ran out.  They were doubled over.  The AD and the — the camerawoman and the director.  (Inaudible.)  We’re back in the town — what’s it called?  We’re back in the western town.”

The caller appeared to be referencing the specific location on the Bonanza Creek Ranch where the filming was occurring.  Other productions were also reportedly using different areas of the facility at the same time Baldwin’s production was on site.

“Is there any serious bleeding?” the dispatcher then asked.

“I don’t know, I ran out of the building,” the caller said in what might be perceived as an irritated tone resulting from having to re-explain herself.

“I still have to go through these, okay,” the dispatcher said while referencing her script of questions.  “Are they completely alert?”

“I don’t know, I can’t tell you,” the caller said.  The caller then handed the phone to a male on the scene.

“Hi, I have a protocol of questions I need to ask, if you could answer them the best you can,” the dispatcher asked.

The man on the phone said both victims were alert at that time.

The dispatcher attempted to walk the man through first aid procedures; he responded that a medic was on set attending to the victims.  He then attempted to get closer to see what had occurred.

“We’ve got one laying down,” the man said — with an increasingly shocked tone to his voice.

The dispatcher then attempted to discuss the location with the caller, said help was on the way, and said that someone should call for other instructions if things became worse.

A 911 phone call disseminated by Albuquerque NBC affiliate KOB — it was unclear if the same caller(s) as above were on the line — was rife with cussing:  “and this (expletive) AD [assistant director] that yelled at me at lunch, asking about revisions, this mother (expletive) (inaudible). He’s supposed to check the guns. He’s responsible for what happens on the set.”

The Los Angeles Times reported earlier Friday that trouble had been brewing on the set.  Some employees walked off the picture amid disputes about pay, commuting time, and long hours, the newspaper said; it also indicated that complaints had been lodged about gun safety the weekend prior to the incident.  Crewmembers told the Times that at least two previous accidental gun discharges had occurred on set.

“There should have been an investigation into what happened,” the newspaper quoted one crew member as saying in reference to the earlier alleged incidents. “There were no safety meetings. There was no assurance that it wouldn’t happen again. All they wanted to do was rush, rush, rush.”

Rust Movie Productions, the company overseeing the film, told the L.A. Times that safety was “the top priority” and that it was “not made aware of any official complaints concerning weapon or prop safety on set.”  The company promised to cooperate with law enforcement and to conduct an “internal review” of its procedures while the film was “shut down.”  (The Wall Street Journal obtained a similar statement from the company.)

The final incident — the one which turned deadly — was said by witnesses to have occurred when Baldwin was getting ready to film a scene during which he was to pull his gun from its holster, the L.A. Times said, again citing anonymous sources on set.  Hutchins was looking at monitors while a camera operator was lining up and checking potential visual angles for the scene.  Baldwin apparently removed the gun once without anything going wrong; the second time, it fired, the newspaper reported.

First Judicial District Attorney Mary Carmack-Altwies said her office did not know if it would file charges.

“This case is still in its preliminary states of investigation,” the prosecutor said on Friday.  “We are assisting the Santa Fe County Sheriff’s Office and have offered our full support to them. At this time, we do not know if charges will be filed. We will look into all facts and evidence of the case with great discretion and have further information at a later time. Our thoughts are with all affected by this tragedy.”