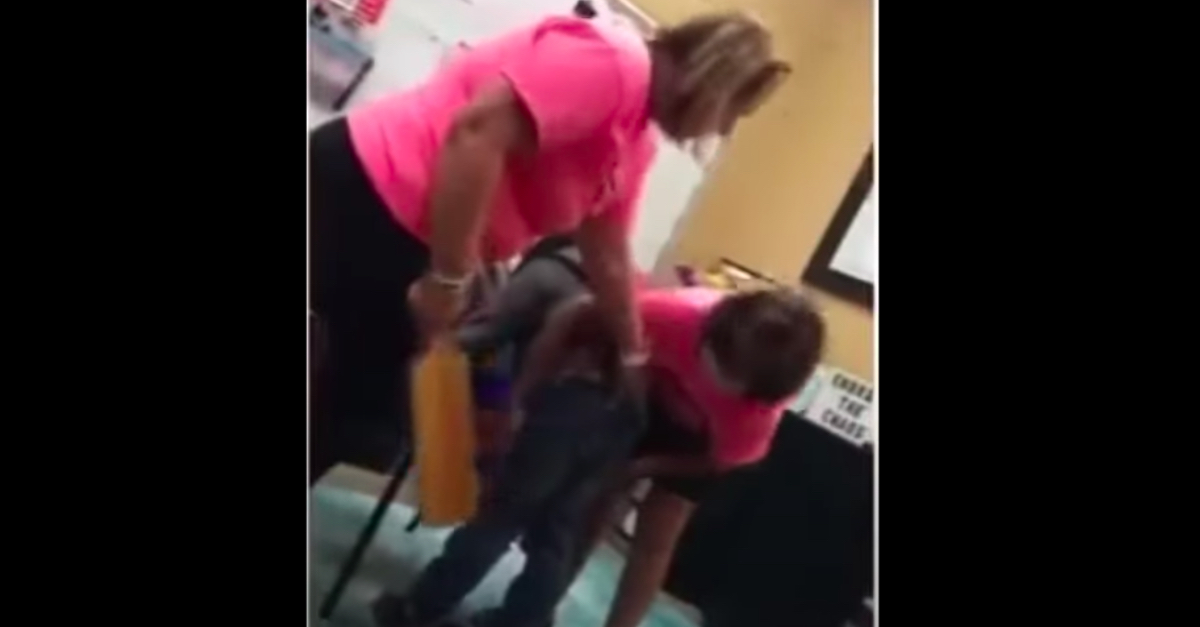 An elementary school principal in Florida is being investigated by local authorities for discipling a 6-year-old student by repeatedly striking her with a wooden paddle in front of her mother.

The corporal punishment was performed in front of the child’s mother, who used her cell phone to surreptitiously record the paddling in a clip that went viral over the weekend.

According to the report, a female employee from the school contacted the child’s mother—whose name has not been reported to protect the identity of her minor daughter—on April 13 to inform her that her daughter had damaged a computer and she would be charged $50. During the call, the school employee brought up the topic of “paddling,” but the child’s mother, a Spanish speaker, didn’t fully comprehend what that meant due to the language barrier. She then went to the school to pay the $50 fee but was instead taken to Principal Carter’s office where her daughter and Self were already waiting.

The child’s mother told WINK that she began to get nervous when she realized there were no cameras or police officers in the principal’s office. That’s when she took out her own phone, hiding it inside of her purse, and began recording what was happening.

The video shows Carter and Self standing on either side of the child who was facing the opposite direction with her hands on a desk. Carter is holding what appears to be a wooden paddle while Self physically positions the child for the impending flogging.

“Finally you understand what’s going on,” Self says as she grabs the crying child by the hips. “Put your butt out.”

Self then steps away and Carter leans in and whacks the child hard on the buttocks. The child yells in pain and immediately pulls out of the bent-over position but one of the women screams, “put your hands down.” The clearly terrified and still crying child concedes and says, “Okay. Okay,” placing her hands back on the desk. Carter then strikes her two more times.

“The hatred with which she hit my daughter, I mean it was a hatred that, really I’ve never hit my daughter like she hit her,” the mother said in an interview with WINK, adding that she had, “never hit” her child before.

Asked why she did not intercede and stop the administrators, the mother said she was afraid what might happen as a result.

“If I had done it with my own hand, it would’ve been bad for me. I don’t know, I’d be in jail,” she told the outlet, noting that without cameras in the office she wouldn’t be able to prove any of her claims.

“I sacrificed my daughter, so all the parents can realize what’s happening in this school,” she told WINK.

“They’re using a weapon that can cause severe physical, harm,” he said. “The child is terrified, she feels vulnerable. There’s nothing she can do in the hands of these adults, who treated her so brutally, savagely, sadistically,”