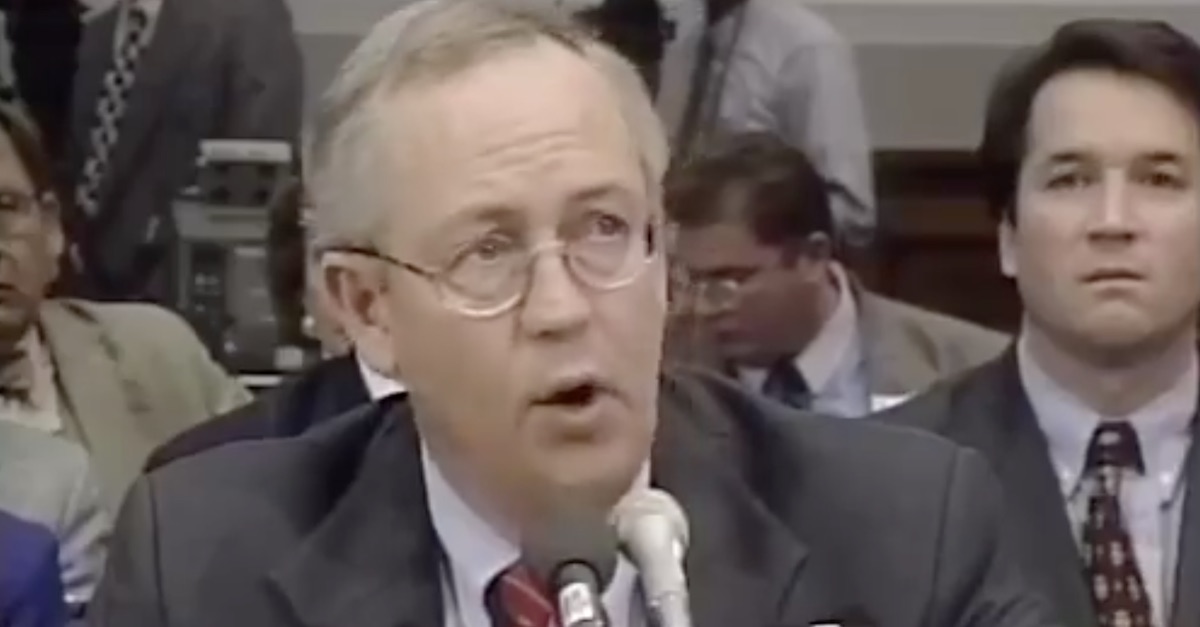 Whoever it is that wrote the script for this season sure has a dark sense of humor. Video of former Whitewater independent counsel Ken Starr arguing that the Clinton administration’s invocation of privilege amounted to an “abuse” is making the rounds online, in no small part because eventual Supreme Court justice Brett Kavanaugh was in the picture.

When Kavanaugh railed against “revenge on behalf of the Clintons” during his confirmation hearings, he was suggesting that the 2016 election result and his time and role on Starr’s team investigating Bill Clinton had something to do with the allegations of sexual misconduct against him. Well, here he is taking in the scene as Starr raged against the Clinton administration’s stonewalling of the Whitewater probe.

Earlier on Friday, we learned that Starr was joining President Donald Trump’s impeachment legal team, to defend the president against charges that he abused his power and obstructed Congress’s investigation of the Ukraine affair.

The context of the resurfaced video: It was Nov. 1998 and there was a hearing before the House Judiciary Committee. Rep. Steve Chabot (R-Ohio) asked Starr for his thoughts on how cooperative the Clinton administration had been with his investigation.

Starr gave a lengthy answer that highlighted some of the differences between that investigation and this one (i.e., court fights). But Starr ultimately concluded that the Clinton administration invoked executive privilege for the purpose or effect of delay, and that, for him, this was an “abuse”–no matter what everyone else in the room thought:

With respect to this phase of the investigation, the administration has been uncooperative. To the contrary, it has litigated numerous issues, although in fairness, in fairness, I think the things that we have litigated, and in fairness, the administration has produced a goodly number of records and the like, and so I would say at a routine level, requests for subpoenas or documents and so forth, there certainly has been that, and I don’t want to be unfair about saying that.

But there is a marked distinction between the cooperation that we received, for example, in the FBI files matter and the cooperation, or lack thereof, that we received in this and in other phases of our investigations. And to me, one of the markers is the invocation of privileges. It may very well be that the considered judgment of this body is: any privilege can be invoked no matter how unmeritorious one thinks it is, that that’s not an abuse. Perhaps we live in such a litigious age that that’s the new way of doing things.

I disagree with that. I think if privileges are invoked for the purposes of delay and have the intended effect of delay–I think that is what happened here–they lose. I have heard complaints about the tactics of the investigation, and yet we go to court. And as I indicated earlier, 17 visits to the court of appeals, thus far we have prevailed in each of those. That sounds like an investigation that is getting it right.

The video below, shared by the nonprofit group Republicans for the Rule of Law, shows Starr saying that “one of the markers” of the Clinton administration’s uncooperativeness with the investigation was the “invocation of privileges.”

Which president is he talking about? pic.twitter.com/jMRRyrNhGs

We’re well past the House Judiciary phase of Trump’s impeachment and the president still intends to invoke executive privilege over the testimony of key witnesses–he says, for the sake of the office of the presidency.