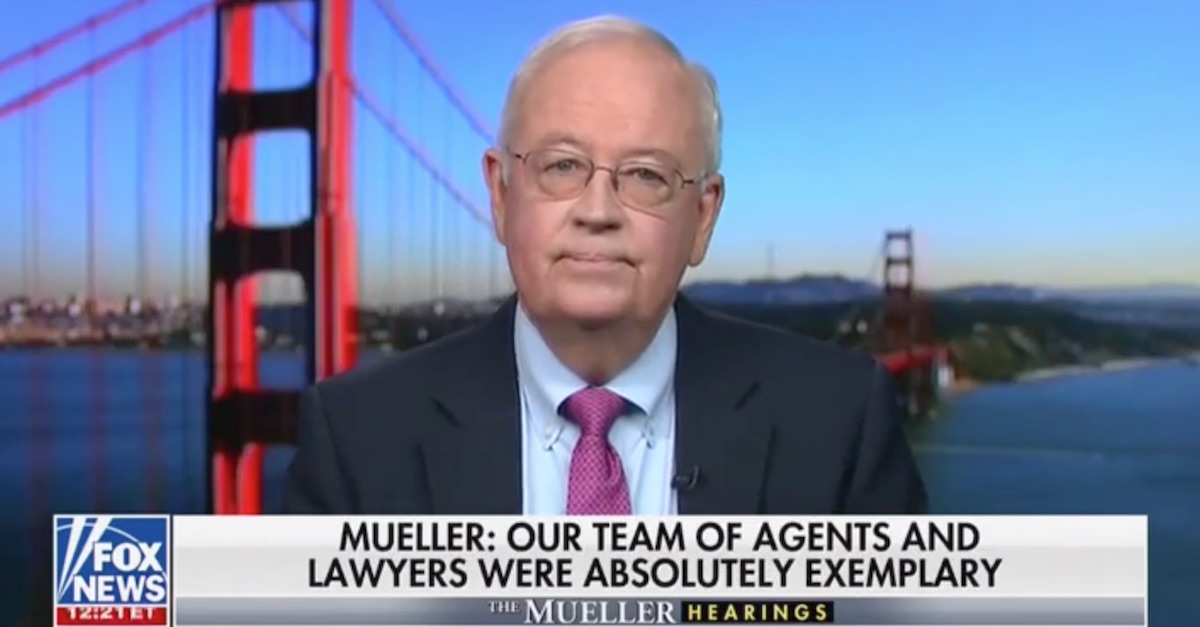 During an appearance on Fox News, Starr specifically called out the hire of Andrew Weissmann as a prime example of Mueller doing a “grave disservice to our country.” “[H]e said time and again, ‘I don’t question the politics of my staff.’ I understand that. But you aren’t blind to what your staff members are all about as human beings?” Starr asked. The overarching logic here appears to be that Weissmann, Jeannie Rhee—and whoever else qualifies as a member of the so-called “18 Angry Democrats”–were so obviously partisan that they could not be trusted to conduct a “fair and balanced” investigation of Donald Trump, a Republican president. As Starr himself said, “you don’t have to ask to know” that Weissmann et al. are “very, very partisan in their outlook on life.”

By Starr’s own logic, the staffers he brought on for the Whitewater probe should not have included any active Republicans as major players in his investigation because, after all, that would do a “grave disservice to our country,” right? So let’s take a time machine back to September 13, 1994, when Starr, a former solicitor general in George H.W. Bush’s administration, began putting together the team that would ultimately recommend Clinton’s impeachment. That team didn’t exactly have a shortage of what Starr might today call obvious partisans, especially “in the early days“:

In the early days of the Starr team, which was formed in 1994, a number of the lawyers shared Starr’s political background, including membership in the Federalist Society, a libertarian group that serves as a law school breeding ground for conservative-minded government lawyers and judges.

Democrats at the time expressed concerns about Starr’s partisanship, as Republicans have today about Mueller’s team.

The Los Angeles Times warned of appointees with “strong ties to Republican legal circles” and reported the same characterization of Starr as woefully partisan:

Starr, a Republican who has been characterized as overly partisan by supporters of President Clinton, named two attorneys as his top deputies, including one holdover from Fiske’s team.

You might know a couple of the names that popped up on September 13, 1994, names that joined Starr’s team as assistant independent counsels: there was this former law clerk for then-Appellate Court Judge Alex Kozinski named Brett Kavanaugh (yeah, the conservative judge President Donald Trump appointed to the Supreme Court); there was this other former law clerk to then-Supreme Court Justice Antonin Scalia named Alex Azar (yeah, he’s President Trump’s Secretary of Health and Human Services).

William S. Duffey Jr., a Republican, was one of Starr’s deputies (he would go on to be appointed to a federal judgeship by George W. Bush). Hickman Ewing Jr., a U.S. Attorney during the Ronald Reagan administration, worked as senior counsel to Starr (Ewing was said to have “always pursued political corruption cases with a religious fervor — zealotry, some say — befitting his fundamentalist faith.”) Jeffrey Toobin once described Ewing this way:

If Clinton is the Ivy League-educated, draft-avoiding, philandering liberal who found success on the national stage, Ewing is the born-again, Vietnam-vet conservative whose current assignment in Little Rock represents his first legal job outside Memphis.

One of the attorneys Starr initially added to his team was Mark Tuohey, who was known for his Democratic Party connections: “Tuohey is well-known in local Democratic Party circles and served as president of the D.C. Bar Association in 1993 and 1994. He is close to some Clinton administration officials, including Associate Attorney General Jamie S. Gorelick, and last year hosted a party for Attorney General Janet Reno at his Washington home.”

Eventually, Starr brought on Jackie Bennett Jr., another former U.S. Attorney, who, to some, had a reputation for “pursu[ing] Democratic officeholders aggressively.” One of Bennett’s colleagues called him “unusually aggressive.”

Bennett would later comment in 2008 that the “hardest part of the [Whitewater] job was the political dynamic.”

“We were being accused daily of being right-wing Republican muckrakers who were trying to bring down a Democratic president. And so you had the entire White House attacking you, attacking your mission, attacking your legitimacy, alleging misconduct, alleging grand jury leaking,” he said. “You had, at the same time, Democratic political figures on Capitol Hill doing what they could, and so you had these House and Senate resolutions to investigate Ken Starr for all of his misconduct. You had Republicans who weren’t really interested in getting into the fight—you know, let Ken Starr and his group take care of themselves.” Bennett most recently represented a Republican mayor who was charged federally with bribery; that Indiana mayor, James Snyder, was convicted.

Now go to 1998 and you will see another WaPo reference to Starr’s staff of “20 men and women,” some of whom were “movement conservatives who share Starr’s pious ideology”:

The 20 men and women who make up independent counsel Kenneth Starr’s legal team have been recruited from the Justice Department, from fancy law firms and from U.S. attorneys’ and local prosecutors’ offices around the country. They include both movement conservatives who share Starr’s pious ideology and some of the hottest public corruption hunters in the business. Collectively, Starr’s staff has bagged dozens of pocket-stuffing mayors, ethically challenged congressmen, bad cops and crooked bureaucrats.

Instead of 18 Angry Democrats, Clinton partisans and the press might as well have called them “_____ Pious Conservatives.”

Some lifelong Republican guy named Rod Rosenstein was also a part Starr’s team; as was Solomon “Sol” Wisenberg, a Fox News contributor, and a friend of Rosenstein‘s who considers himself a conservative. Paul Rosenzweig served an associate independent counsel under Starr (His words: “In short, I am a conservative. I have testified before Congress on more than a dozen occasions as an invited witness, almost always at the request of members of the Republican party.”) Rosenzweig has said that he believes that Mueller’s findings warranted an impeachment inquiry. Stephen Binhak, another Whitewater prosecutor alum, has expressed the same opinion. Florida voter records indicate that Binhak is a registered Democrat.

But there was also a contingent of “public corruption hunters” in Starr’s office, to whom political allegiances were irrelevant (As of 1998: “[M]any, if not most, of the lawyers on this investigation are registered Democrats. And a longtime Starr staffer says political pedigree does not come up in job interviews there.”).

One Whitewater prosecutor with a reputation for tormenting Democrats was former Miami federal prosecutor Bruce Udolf (Per Slate: “Most of the politicians Udolf went after in Florida were Democrats. But Udolf didn’t join up with Starr for partisan reasons or because he wanted to get Bill Clinton. Udolf was a Democrat himself. He had voted for the president. What attracted him to the Starr probe were the stakes.”).

While the original composition of the office may have been more in line with Starr’s staunch conservatism, lawyers like Udolf were evidently not. They still did the job for reasons other than politics:

But in an office with very high turnover — many lawyers are on temporary loan from their previous posts — most recent hires have been career prosecutors who do not necessarily share the boss’s politics.

They join the office for reasons other than politics. Top prosecutors are often attracted to independent counsel investigations because the stakes are high — going after members of Congress, even the president — the resources are unlimited and the whole psychology of the hunt is more intense than any local prosecutor ever experiences.

The money is also a factor.