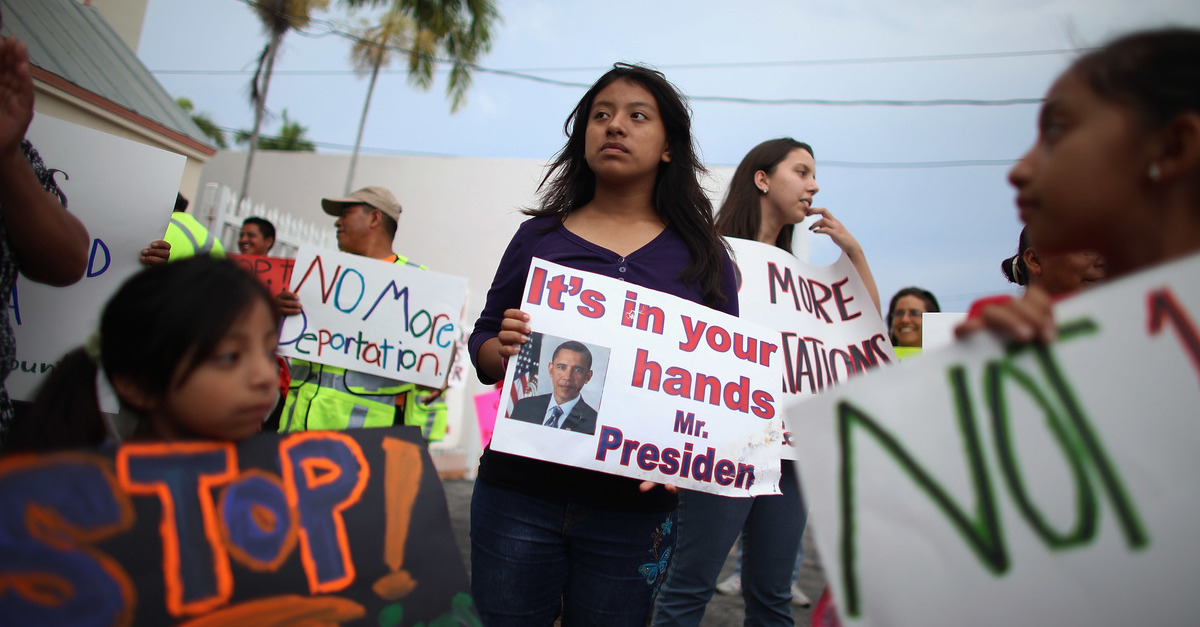 A story about Immigration and Customs Enforcement (ICE) using a fake university to string immigrants up on fraud charges is currently making the rounds on social media. Many people sharing the story are attributing ICE’s controversial actions to the immigration agenda of President Donald Trump. The fake university, however, was actually a program started by then-president Barack Obama in 2015.

According to the Detroit Free Press, some 250 students have been arrested by ICE on immigration violations since January. Additionally, eight recruiters who worked for the fake university have been criminally charged–seven of whom have been forced to plead guilty.

An ICE spokesperson told the outlet that “nearly 80% [of students] were granted voluntary departure and departed the United States,” with the remaining students subject to removal orders, including “expedited removal by U.S. Customs and Border Protection.”

About half of those students “have either filed for some sort of relief or are contesting their removals with Executive Office for Immigration Review,” ICE Homeland Security Investigations officials said.

The shocking program known as “Operation Paper Chase” has been criticized as an obvious case of entrapment by critics–including an attorney for one of the accused. But confusion or misrepresentations about the fake university program are currently running apace online.

“Leave it to the Trump administration to use a fake university—this time, to trick immigrants into forking over cash for fake classes and invalidating their legal visas in the process,” wrote Rolling Stone journalist and commentator Jamil Smith via Twitter. “They ended up arrested by ICE. How is this anything but entrapment?”

“This is an Obama-era entrapment program,” noted activist Ben Spielberg. “It started in 2015. ICE also did the same thing in New Jersey under Obama, opening a fake college in 2013 and arresting immigrant students in 2016. Totally outrageous, agreed.”

Several additional Twitter users pointed out Smith’s mistake but, as of this writing, he has not acknowledged the program’s origins.

Immigration rights advocates have pointed out that it’s actually Trump and Obama who have a lot in common.

“I think if you were to ask a Latinx Catholic leader they’d throw the book at Obama,” said organizer Brook Hines. “They’d say yes, thanks for DACA which didn’t have any teeth, and we saw how you didn’t expend any political capital to get legislative action.”

Hines previously worked on immigrant justice issues–including the Path To Citizenship campaign in 2011.

“I believe that we would have won the Senate if Obama had delivered a legislative win, or shown any political will on this. Our losses were paper thin, and many were in states with large latinx populations. I know for a fact that the voters and non-paid activists were incredibly demoralized. They totally expected Obama would change his policy or fight for the Path To Citizenship. He did neither which opened the door for Trump.”

In a message to Law&Crime, Clark criticized the liberal and media establishment’s tendency to “focus on symptoms, while ignoring the root cause” of pressing political issues–including immigration.

“Many conveniently point to Trump as the root cause, yet the present crisis is a culmination of decades of U.S.-financed violence, unjust economic policies, and the devastating effects of climate change,” Clark said–referring to U.S. sponsored coups in Latin America.

The 2020 congressional candidate went on:

There is often a liberal push to absolve the Obama administration or any responsibility, but we cannot ignore that part of Obama’s legacy help to lay the groundwork for the immigration policies we are condemning currently. Obama made family detentions a centerpiece of his administration’s response to displacement from Central America. This practice of family detentions have now escalated under Trump’s presidency to family separations and child detentions.

Several other high-profile media personalities promoted the story without cluing their readership into the program’s context or history.

This story is WILD

ICE created a fake university, then:

Students had come legally on student visas, but since the school was fake the visas weren't valid https://t.co/N39KWZTFV0

“OH MY GOD,” intoned Charmed actress and recently-minted activist Alyssa Milano. “ICE has arrested about 250 students who were enrolled at a fake university set up by ICE to lure in students.”

Milano’s tweet also lacked any context as to when the “Paper Chase” program began. The Joe Biden surrogate similarly did not deign to respond when Twitter users pointed out the Obama connection.

Perhaps contributing to the confusion about the genesis of ICE’s sting operation is the fact that the original Free Press story on the latest round of round-ups fails to mention the 44th president whatsoever.