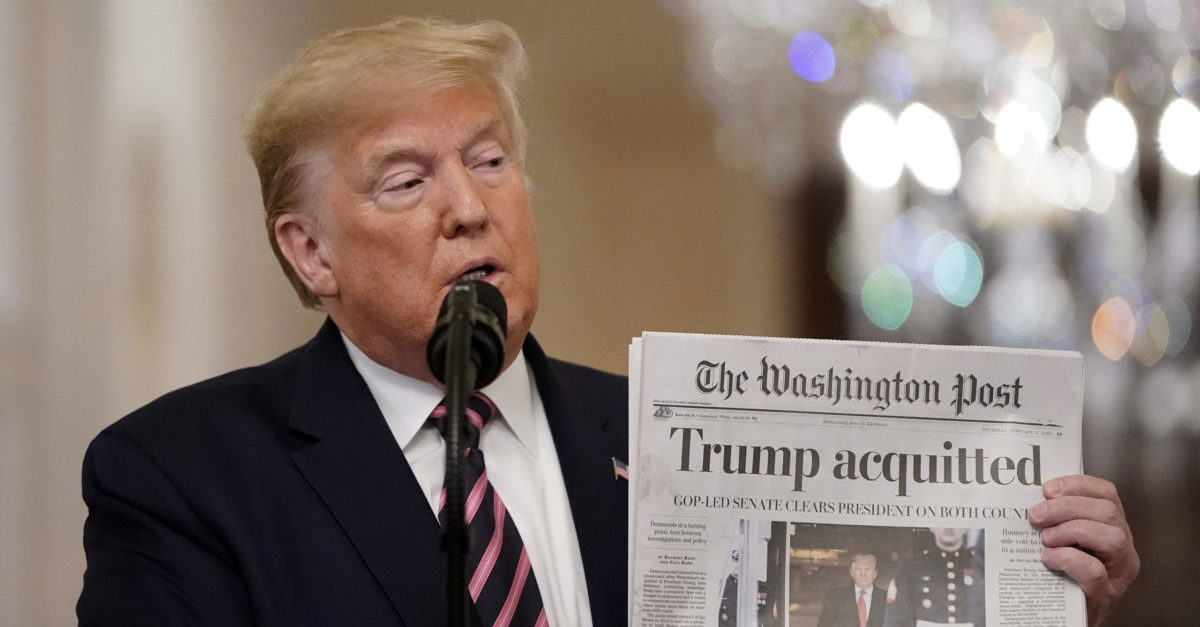 “It’s fake. It’s made up,” he further said of the paper on that date.

Why stop there, though?  Why not throw everyone else under the bus a few days later?

But we have a fake press. We have a phony press. We don’t have freedom of the press in this country.  We have a phony press. They’re dishonest, most of them. We have some fine people from — fine journalists and reporters and companies. But most of them are fake and phony. CNN, NBC, ABC, CBS, The Washington Post, New York Times — these are fake papers. They are fake press. And there is — they should be ashamed of themselves, and they hurt our country.

That’s what Trump had to say November 20, 2019. He said something similar earlier, on September 25, 2019, but later praised the paper February 6, 2020, when its headlines were “good” to him immediately after his impeachment vote failed. That love, pictured above, was short lived:  Trump’s campaign sued the Washington Post less than a month later, in early March, 2020, for running allegedly defamatory op-ed pieces about him which contained a rhetorical question.

Now, the president’s 2020 campaign has given the so-called “fake newspaper” “fake press” “phony” Washington Post its biggest endorsement ever from Team Trump. What kind of endorsement? The campaign has put so much trust in the Post that it has attested to the Post’s accuracy in a court of law. Yes, it’s true:  the Trump Campaign cited the Washington Post‘s reporting in a lawsuit filed against a small Wisconsin television station which aired a super PAC advertisement which was critical of Trump. The details of that lawsuit are here, and the lawsuit itself is embedded below.

The Trump campaign lawsuit references the Post some 26 separate times. The Post is described in the lawsuit as a “fact-checker,” and an entire Post article dated March 13, 2020 is included as Exhibit E on page 45 of the PDF. The cited article purports to show that the super PAC advertisement at issue in the lawsuit used manipulated audio. The Post is further cited to present to a judge a full Trump quote from a campaign rally in North Charleston, S.C., for comparison to the audio at issue.

The lawsuit filed by the Trump campaign is a Wisconsin civil suit. Under Wisconsin law, when an attorney signs a document and presents it to a court or otherwise files a claim, that attorney “is certifying that to the best of the person’s knowledge, information, and belief” that the “factual contentions stated … have evidentiary support” or are “likely to have evidentiary support” after a reasonable investigation. In other words, signing or submitting court papers is a big deal. By pressing a case, lawyers are attesting that they believe what they’re saying is basically true and that their documents back up their claims. As the official comments to the Wisconsin rules of civil procedure state, if information turns out not to be true, then an attorney has to stop using it: “the party has a duty under the rule not to persist with that contention.”

Those are the rules for filing a civil suit. More broadly, attorneys are bound by the Rules of Professional Conduct.  In Wisconsin, as elsewhere, the rules require attorneys to present information to tribunals with candor. “A lawyer shall not knowingly … make a false statement of fact,” the rules say. An attorney also cannot “offer evidence that the lawyer knows to be false.”

Submitting news reports to a court is like legally attesting that the reports are journalistically accurate and that the reporting contained within them is sound. That’s what Team Trump’s attorneys just did on the president’s behalf with the Washington Post and CBS News. They’re saying those news sources are trustworthy after all — at least in this case. Trump himself did say “almost everything” in the Post was fake. Apparently we now know what’s not:  the articles which allow him to gloat about not being impeached and the articles which allow him to try to blast his political enemies. In other words, in Team Trump’s view, the Post is only telling the truth when it makes Trump look good.

The federal rules of civil procedure contain similar language for attorneys and documents filed in federal courts.  We’ve relied on that federal language to point out how much the Democratic National Committee trusts Fox News.