‘The Definition of Totalitarian’: Lawyers Erupt as American President Asserts That His ‘Authority Is Total’ 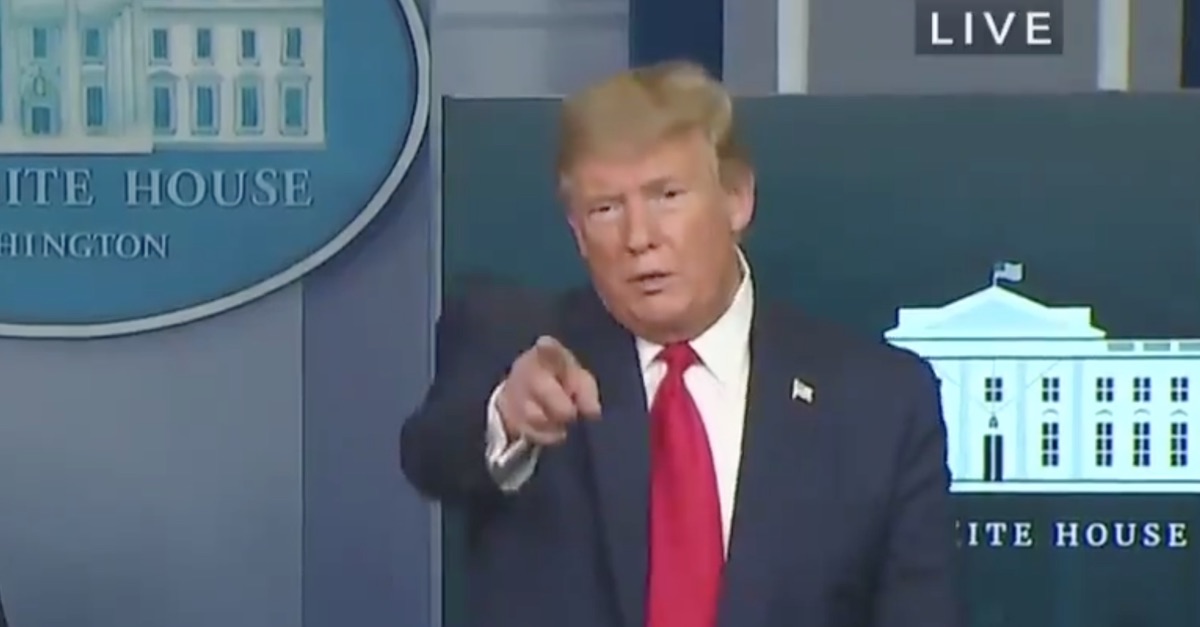 President Donald Trump uttered a variation of his memorable campaign declaration “I alone can fix it” on Monday’s edition of the Coronavirus Task Force briefing: “When somebody is the president of the United States, the authority is total.”

Earlier in the day, President Trump incorrectly said that because he’s president he could force the states and their governors to reopen for business.

“For the purpose of creating conflict and confusion, some in the Fake News Media are saying that it is the Governors decision to open up the states, not that of the President of the United States & the Federal Government. Let it be fully understood that this is incorrect,” he tweeted. “It is the decision of the President, and for many good reasons. With that being said, the Administration and I are working closely with the Governors, and this will continue. A decision by me, in conjunction with the Governors and input from others, will be made shortly!”

Law&Crime has analyzed at length Trump’s ability to strong-arm states into getting back to business, but that idea is different idea from declaring states “open” regardless of how state chief executives feel about it.

Unsurprisingly, Trump was grilled about this during the Monday briefing. He doubled and tripled down, asserting that his “authority is total.”

“The president of the United States calls the shots,” he said. “They,” the states, “can’t do anything without the approval of the president.”

TRUMP on possibility states won't want to relax social distancing as quick he would like: "The president of the United States calls the shots … it's a decision for the president … they can't do anything without the approval of the president." pic.twitter.com/a9f73Z8G3N

.@kaitlancollins: You said when someone is the president, their authority is total. That is not true.

TRUMP: "Okay — you know what we're going to do? We're going to write up papers on this. It's not gonna be necessary. Because the governors need us one way or the other." pic.twitter.com/NUe1b2BvcT

“It is not a pleasant judicial duty to find that the President has exceeded his powers, and still less so when his purposes were dictated by concern for the Nation’s wellbeing, in the assured conviction that he acted to avert danger,” Justice Felix Frankfurter famously wrote.

Lawyers’ alarmed reactions to these Trump claims of “plenary” authority were numerous and foreboding.

Where are the conservative Republicans?

More Trump: “When somebody’s the president of the United States, the authority is total.”

Will any GOP senator or congressperson do more than furrow a brow? https://t.co/3kUwNpkPMu

April 2020, Donald Trump proclaims: "When somebody is the President of the United States, the authority is total"

“The literal definition of a totalitarian government.”

Trump: “When somebody is president of the United States, the authority is total.”

That would be the literal definition of a *totalitarian* government—which our traditions, our Constitution, and our values all rightly and decisively reject.

“Authoritarian rhetoric” from a president who has “wielded […] power ineffectually” during the pandemic.

The president’s authority in an emergency is potentially very broad but not total. But effective exercise of that authority takes organization, knowledge, leadership, good judgment, and persuasiveness. DT's response to COVID-19 has displayed presidential weakness, not power.

Not what he said days ago…

Didn't he literally invoke "the Constitution" like five days ago as a reason that the federal government CAN'T intervene to help states get ventilators and PPE??? https://t.co/HprPVMfQHm

Gov. Andrew Cuomo: “We have a Constitution. We don’t have a king.”

In response to the President's claim he has total authority, @NYGovCuomo says he disagrees with Trump's legal analysis.

"We have a Constitution. We don't have a king." pic.twitter.com/knG5rI69Zw