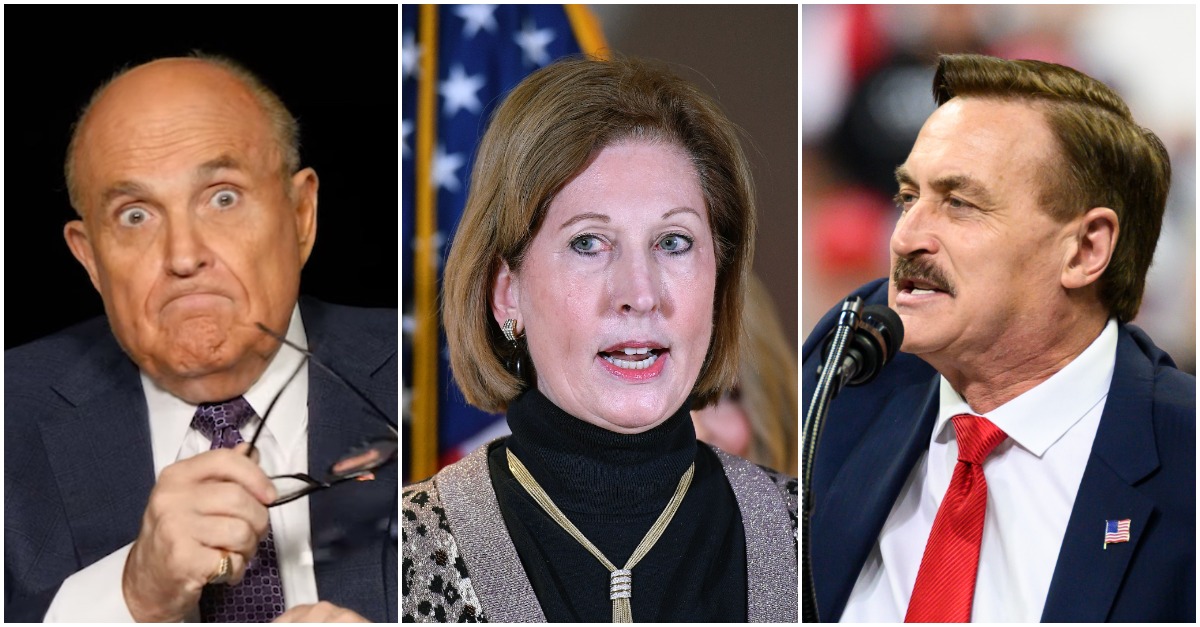 In the 44-page opinion, U.S. District Judge Carl J. Nichols, a Donald Trump appointee, dismissed attempts by the named defendants to jettison the litigation using a myriad of legal techniques and arguments.

The lawsuit spent nearly a dozen pages recounting precisely which supporter of then-President Trump said what, and when, with regards to election integrity and whether or not the election was “stolen” by “massive election fraud.”

The judge rubbished Powell’s attempt to argue that her statements were merely opinions about the 2020 election and therefore were not actionable in a defamation lawsuit. (Defamation involves false statements of fact, not opinions.) And the judge said Powell could not cloak her commentary with immunity because it involved politics (citations omitted):

“As an initial matter, there is no blanket immunity for statements that are “political” in nature: as the Court of Appeals has put it, the fact that statements were made in a “political ‘context’ does not indiscriminately immunize every statement contained therein.” It is true that courts recognize the value in some level of “imaginative expression” or “rhetorical hyperbole” in our public debate. But it is simply not the law that provably false statements cannot be actionable if made in the context of an election.

“[I]t is simply not the law that provably false statements cannot be actionable if made in the context of an election,” Nichols wrote elsewhere.

The judge similarly swept aside claims by Powell that she was merely reporting details contained within her own lawsuits — thus affording her, in her mind, with some for of privilege or protection:

Powell similarly argues that her statements were protected commentary about other lawsuits. But Powell cannot shield herself from liability for her widely disseminated out-of-court statements by casting them as protected statements about in-court litigation; an attorney’s out-of- court statements to the public can be actionable, even if those statements concern contemplated or ongoing litigation.

Several pages of analysis are then devoted to the question of whether a reasonable juror could find Powell’s commentary “expressed or implied a verifiably false fact about Dominion.”

“This is not a close call,” the judge opined — then went through a list of specific reasons why (again, citations omitted):

To take one example, Powell has stated publicly that she has “evidence from [the] mouth of the guy who founded [Dominion] admit[ting that] he can change a million votes, no problem at all.” She told audiences that she would “tweet out the video.” These statements are either true or not; either Powell has a video depicting the founder of Dominion saying he can “change a million votes,” or she does not.

Take a few more examples. Powell has stated publicly that Dominion “flipped,” “weighted,” and “injected” votes during the 2020 election; either Dominion did so or (as Dominion alleges) it did not. Powell has claimed that state officials received kickbacks in exchange for using Dominion machines; either state officials received such kickbacks or (as Dominion alleges) they did not. All of these statements, and many others alleged in Dominion’s Complaint, “expressed or implied a verifiably false fact” about Dominion.

In part of his analysis, Nichols dinged Powell — and later Lindell — for their use of one so-called “expert” who spouted highly questionable histories of the world while disparaging the voting machine company.

“That expert has also publicly claimed that George Soros, President George H.W. Bush‘s father, the Muslim Brotherhood, and ‘leftists’ helped form the ‘Deep State’ in Nazi Germany in the 1930s—which would have been a remarkable feat for Soros, who was born in 1930,” Nichols noted in one parenthetical.

Powell had attempted to evade the entirety of the lawsuit by claiming that a D.C.-based district court lacked jurisdiction to hear the lawsuit against her. The court rejected that notion out of hand by noting that Powell represented Trump-era stalwart and retired lieutenant general Michael Flynn within the D.C. court system–which was more than enough to satisfy the federal district’s long-arm jurisdictional statute.

“[H]er representation of Michael Flynn occurred here, and she traveled to and rented hotel rooms here while filming interviews in which she repeated her allegedly defamatory statements,” Nichols noted–before citing language from relevant case law on civil procedure which would be well-known to any first year law student. “[I]t is enough that she has ‘purposefully engaged in some type of commercial or business-related activity directed at District residents,’ and that there is a ‘discernible relationship’ between her contacts and Dominion’s claims.”

Lindell similarly made a failed argument against jurisdictional heft.

The court noted the MyPillow CEO held and attended “three MyPillow-sponsored rallies” in the federal district “and touted his relationship with President Trump to market his products” there–including, as the judge pointed out in another parenthetical observation that Lindell made such endorsement-themed claimed “during the 2017 White House event in which Trump endorsed MyPillow and at an August 2020 speech in the Rose Garden.”

“As a preliminary matter, a reasonable juror could conclude that the existence of a vast international conspiracy that is ignored by the government but proven by a spreadsheet on an internet blog is so inherently improbable that only a reckless man would believe it,” the judge wrote re: Lindell. But other alleged facts buried within Lindell’s claims did suggest to the judge that Dominion’s lawsuit should remain alive:

[I]n addition to alleging that Lindell’s claims are inherently improbable, that his sources are unreliable, and that he has failed to acknowledge the validity of countervailing evidence, Dominion has alleged numerous instances in which Lindell told audiences to purchase MyPillow products after making his claims of election fraud and providing MyPillow promotional codes related to those theories. In totality, it has adequately alleged that Lindell made his claims knowing that they were false or with reckless disregard for the truth.

Among Giuliani’s gripes was that Dominion had not properly pleaded that it suffered lost profits under Federal Rule of Civil Procedure 9(g) as a result of his claims about the election. The judge said Giuliani was wrong on the law as it is applied in the District of Columbia.

“Under D.C. law, defamation may be actionable as a matter of law irrespective of actual harm (‘defamation per se’) or, if not, when the plaintiff pleads special harm,” the judge wrote. “There is no question that Giuliani’s statements accusing Dominion of election fraud constitute defamation per se; if Dominion were an individual, damages would be presumed.”

The judge said Giuliani’s reliance on three cases to support his technical analysis of the pleadings is sorely misplaced: according to the judge, the cases simply don’t say what Giuliani claims they say. “The Court is not aware of any case requiring a corporate plaintiff alleging defamation per se to plead damages specially, and by its terms Rule 9(g) does not include such a requirement,” the judge concluded.

This report, which began as a breaking news piece, has been updated substantially.