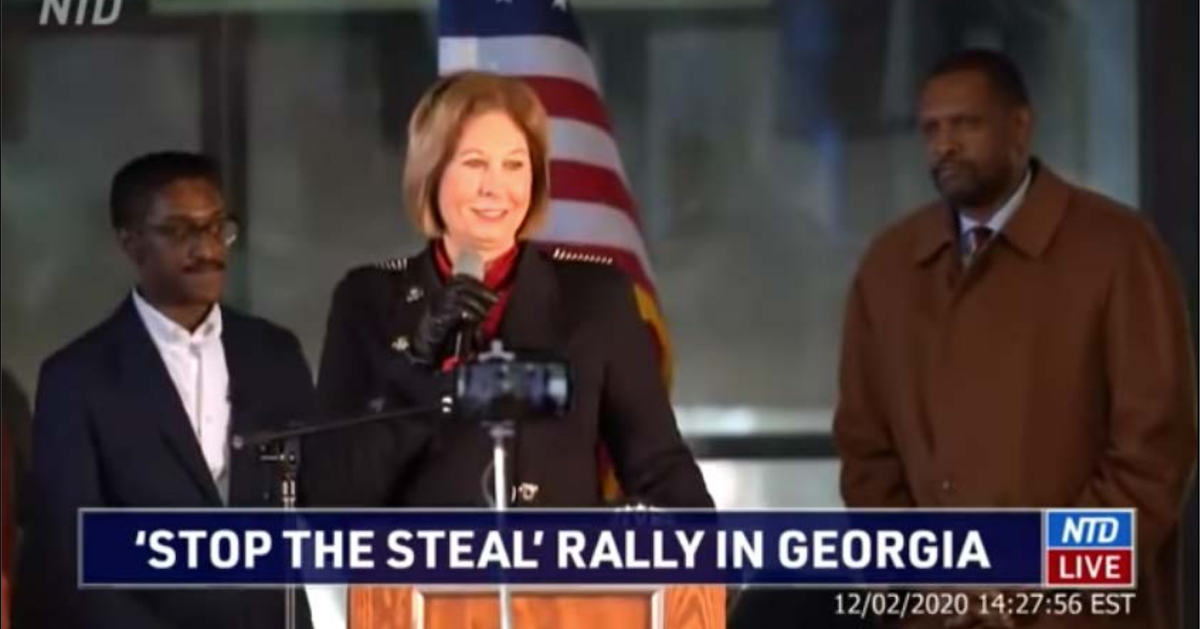 This photograph of Sidney Powell at the so-called “Stop the Steal” rally broadcast on NTD is embedded in Dominion’s lawsuit.

Taking an action long promised to be “imminent,” Dominion Voting Systems has sued right-wing lawyer Sidney Powell. The company seeks damages to the tune of more than $1.3 billion for “wild” and “demonstrably false” allegations against the company that Powell made through “conspiracy theorists, con artists, armchair ‘experts,’ and anonymous sources.”

“During a Washington, D.C. press conference, a Georgia political rally, and a media blitz, Powell falsely claimed that Dominion had rigged the election, that Dominion was created in Venezuela to rig elections for Hugo Chávez, and that Dominion bribed Georgia officials for a no-bid contract,” the 124-page complaint states.

As previously reported by Law&Crime, Powell was one of roughly a dozen people and entities that received some 21 retraction demands, legal threats and preservation notices from Dominion last month, but the company said that the threat of litigation did not chasten her.

“After Dominion sent Powell a letter putting her on formal notice of the facts and the death threats and asking her to retract her false claims, Powell doubled down, tweeting to her 1.2 million Twitter followers that she heard that ‘#Dominion’ had written to her and that, although she had not even seen Dominion’s letter yet, she was ‘retracting nothing’ because ‘[w]e have #evidence’ and ‘They are #fraud masters!’,” the complaint notes.

The lawsuit, which alleges two counts of defamation per se and deceptive trade practices, refers to those death threats seven times, which were given chilling detail in letters Dominion previously sent to news networks. The company recounted employees being told “I hope you get execute [sic] with chainsaw” and “Your days are numbered!”

Dominion shared these screenshots of death threats that the company received on social media after an OAN broadcast in a letter to the network.

“To ensure that her tweet would be published to the largest possible audience and inflict maximum harm on Dominion, Powell tagged some of her allies with massive Twitter followings, including Donald Trump, Georgia-based defamation attorney L. Lin Wood, and Powell’s client, Trump’s former National Security Advisor Michael Flynn,” it continues.

Powell did not immediately respond to an email requesting comment.

In a statement, Dominion’s CEO John Poulos made clear that the attacks on the democratic process were “not singular or isolated events.”

“They are the result of a deliberate and malicious campaign of lies over many months. Sidney Powell and others created and disseminated these lies, assisted and amplified by a range of media platforms,” Poulos said. “Lies were told about government election officials, elections workers, and Dominion Voting Systems. Those lies have consequences. They have served to diminish the credibility of U.S. elections. They have subjected officials and Dominion employees to harassment and death threats. And they have severely damaged the reputation of our company.”

Calling Friday’s lawsuit a “first step,” Dominion did not reveal whether some of the other threatened lawsuits would materialize, such as ones they indicated could be filed against Wood, Fox News, One America News Network, Newsmax, the Epoch Times, Trump lawyer Rudy Giuliani, his so-called “star witness” Mellissa Carone, and others.

Their attorney Thomas Clare, Partner at Clare Locke LLP said in a statement he has “never seen clearer and more convincing evidence of actual malice” than Powell’s in his decades of practice as a defamation lawyer.”

“”Ms. Powell lied about the hand audits and recounts of paper ballots that conclusively disprove her claims; she lied about having a recording that does not exist; she manufactured, misrepresented, and cherry-picked evidence to support her false accusations and to conform to her false preconceived storyline; she disregarded and attacked the respected Republicans and election security experts who forcefully rebutted her false claims; and she proffered and misrepresented the obviously unreliable say-so of con artists, conspiracy theorists, armchair experts, and—by her own admission—the associate of a now-deceased Venezuelan dictator who was hostile to American democracy,” Clare wrote.

Filed in federal court in Washington against Powell, her law firm, and her supposed 501(c)4 Defending the Republic, Dominion demands at least $651,735,000 in compensatory damages plus the same amount in punitive damages. Powell previously declined to provide paperwork to Law&Crime about her supposed non-profit organization, which is registered in Texas and has solicited donations directly to her law firm.

Dominion says the entity’s directors are: Powell, Wood and “Brannon Castleberry, who, upon information and belief, is the owner of CWL Consulting, ‘a strategy group specializing in PR/Crisis Comms, Governmental Affairs, and Marketing.'” Defending the Republic shares an office with Powell’s firm, the complaint states.

Before the White House distanced itself from her, Powell shared the stage with Giuliani in a press conference announcing a cascade of lawsuits that have all since failed. That did not stop Powell from reportedly receiving an invitation to the White House, which Dominion used to argue that the District of D.C. could assert jurisdiction over her.

Dominion asserts the company has found a connection to Russian disinformation via an ex-romantic partner of Maria Butina, who pleaded guilty to being a Kremlin agent after infiltrating the pro-Trump conservative elite. Ex-Overstock CEO Patrick Byrne, who was ousted from the company after claiming to be Butina’s old flame, contacted Powell and Rudy Giuliani the day after the election to tell them he started funding a plan in August, “had this plotted out what they were going to do,” and had “’reverse engineered’ how the election was stolen,” according to the complaint. (A Senate Intelligence Committee report suggests he may have “stalked” Butina, not dated her.)

Byrne made those remarks on the podcast of Jerome Corsi, who was subpoenaed during special counsel Robert Mueller’s investigation into Russia’s interference in the 2016 presidential elections.