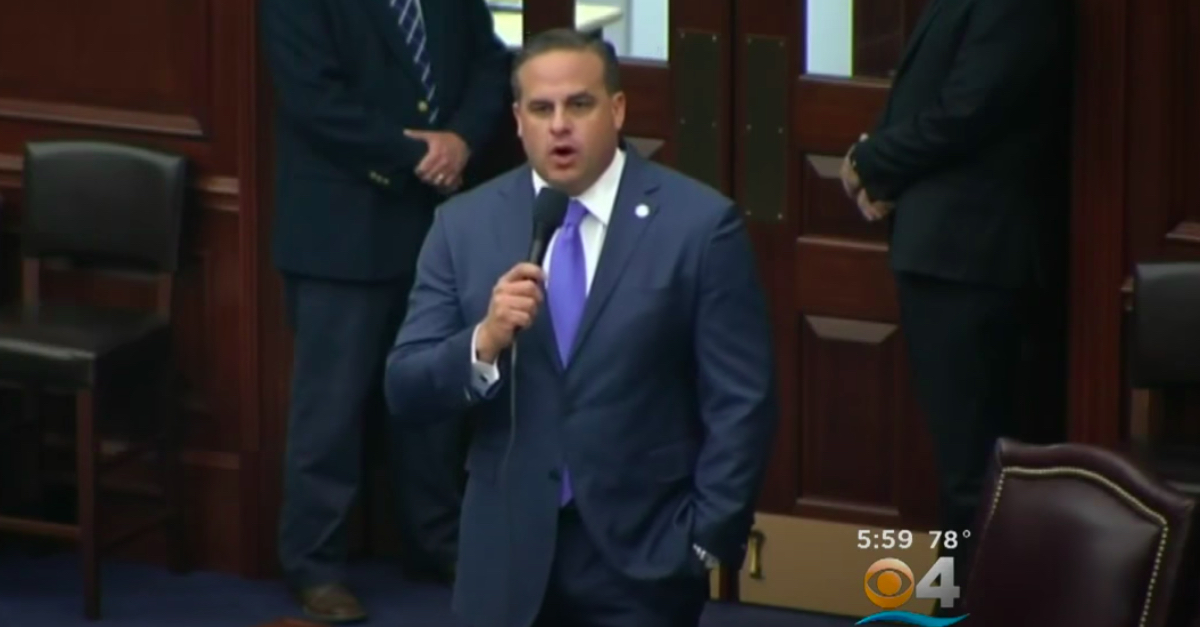 State authorities in Florida on Wednesday morning executed a search warrant on the home of former Republican state Sen. Frank Artiles in connection with an investigation into a sham candidate for the Florida Senate whose presence in the race was very likely the reason behind GOP’s victory over a Democratic incumbent in a key district, several news outlets reported.

Officers with the Miami-Dade State Attorney’s Office were seen collecting and removing items from inside Artiles’s home in brown cardboard boxes, according to the Miami Herald.

Sources said to have knowledge of the investigation told Local 10 that the warrant “involves the search of his electronics, including his cell phone and computer, and a safe in the Palmetto Bay house might also be included,” as investigators search for communications between Artiles and sham candidate in last year’s District 37 Senate race Alex Rodriguez. Local 10 also reported that officers were searching for evidence showing whether Artiles funded Rodriguez’s campaign.

Rodriguez was one of at least three non-viable third-party candidates for Florida Senate who were all funded by the same unknown dark money donor(s) as part of a scheme first uncovered by Local News 10 in Nov. 2020 that appeared aimed at siphoning votes away from Democratic candidates. None of the shill candidates did any fundraising, campaigning, voter outreach, or anything that would help them get elected. The same political action committee (PAC), “Our Florida,” paid for campaign mailers promoting each of the candidates as supporting progressive policies. That PAC only reported one registered donor which was traced back to a P.O. box in Atlanta.

It was later revealed that Alex Rodriguez, who had been a registered Republican up until he decided to run as a third-party candidate, used a false address on his campaign filing form. The Herald in Dec. 2020 reported that, on the evening of Nov. 3, Artiles was heard publicly bragging about how he was responsible for Rodriguez’s third-party run for office—telling a group of people over drinks: “That is me, that was all me.”

Artiles resigned from the Florida Senate in 2017 amid accusations that he drunkenly referred to two Black lawmakers using a racial slur at a Tallahassee bar. He was also accused of hiring a Playboy model and a Hooters model as political consultants despite neither having any experience in politics.