Texas Man Arrested Outside of Gates to Naval Observatory in D.C. Has Been Identified. He Now Faces Weapons Charges. 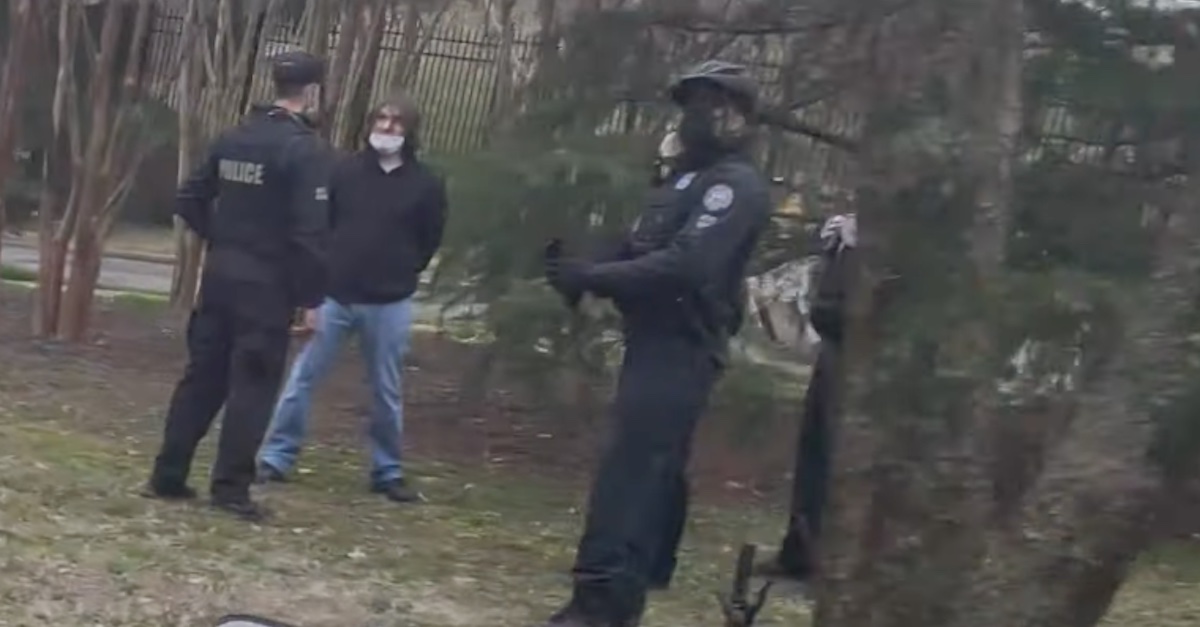 People walking and driving by in Washington, D.C. on Wednesday observed a man in police custody outside of the United States Naval Observatory, where the Vice President’s residence is located. That man has since been identified as 31-year-old Paul Murray of Texas.

Fox 5 DC reported that Murray faces weapons charges, including for possessing unregistered ammunition, possession a large capacity ammunition feeding device, and carrying a dangerous weapon. The BOLO alert shared by Fox 5 DC reporter Lindsay Watts indicates that Murray was suffering a mental health crisis. The former Army drone operator was medically discharged from the military in 2014 and had recently purchased an AR-15—even telling his mother that he went to D.C. to “take care of his problem.”

Bolo says he was Army drone operator who started service in 2010, medically discharged in 2014. Recently complained to police he wasn’t getting VA support and not taking prescribed meds. Also recently bought AR-15, per police.

“Subject has been experiencing paranoid delusions of people, mainly the military and government being after him and want to kill him. He recently purchased an AR-15 and may have it in his possession,” the alert said. “Mother received a text from home this morning stating he was in Washington DC and was going to take care of his problem.”

Authorities noted that Murray had “much longer” hair than he did when his driver’s license photo was taken. The image of him at the top of this story is consistent with that description.

Other details say Murray reported to police in Oct. 2020 that he believed he had been “drugged” or “poisoned” on a trip to Japan. As recently as March 3, he said he believed he had been attacked by a group called “3 Stones” overseas. Two days prior to that contact with the Brazos County Sheriff’s Office, he contacted the College Station Police Department. He went to the department lobby and said he wasn’t “getting enough support from the VA or local police” and “he’s been prescribed meds, but immediately stopped taking them all due to ‘intense’ side effects,” as the “subject activity summary” put it.

NBC 4 Washington’s Scott MacFarlane reported that authorities were on the lookout for an individual in the region. The man allegedly had a “long gun” and a “large amount” of ammunition in a car that was in a parking garage in the city.

At the end of January, it was reported that Vice President Kamala Harris (D) and her husband Douglas Emhoff would not yet be moving to Number One Observatory Circle because the residence was undergoing renovations. They have been living instead at Blair House.

UPDATE: New info from DC Police clarifies there was a region-wide lookout for this man. NOT a specific lookout from US Capitol Police https://t.co/uEHknfFAGv

Another earlier report indicated the Murray’s Chevy Impala with Texas license plates was in a garage in the “600 [block of] Massachusetts Ave NW,” around a 15-minute drive away from the Naval Observatory gates.

update: MAN'S CHEVY IMPALA w/ Texas tags has been located in a garage in the 600 blk Massachusetts Ave NW-DC. Bomb techs and gun dog will perform routine sweep of the auto. One report suggested he owns an AR15. @PenguinSix @PoPville https://t.co/uuCOnt2ibY

Andrew Leyden (@PenguinSix) filmed video showing the man identified as Murray while he was detained.

In response to an anchor who photographed the heavy police presence around Massachusetts Ave., Leyden noted that he saw those police cars flying by and “likely to that location.”

FWIW I was walking between the VP's place where I filmed the arrest down Mass Ave and many of the police cars earlier from the Naval Observatory were flying down Mass Avenue, likely to that location.