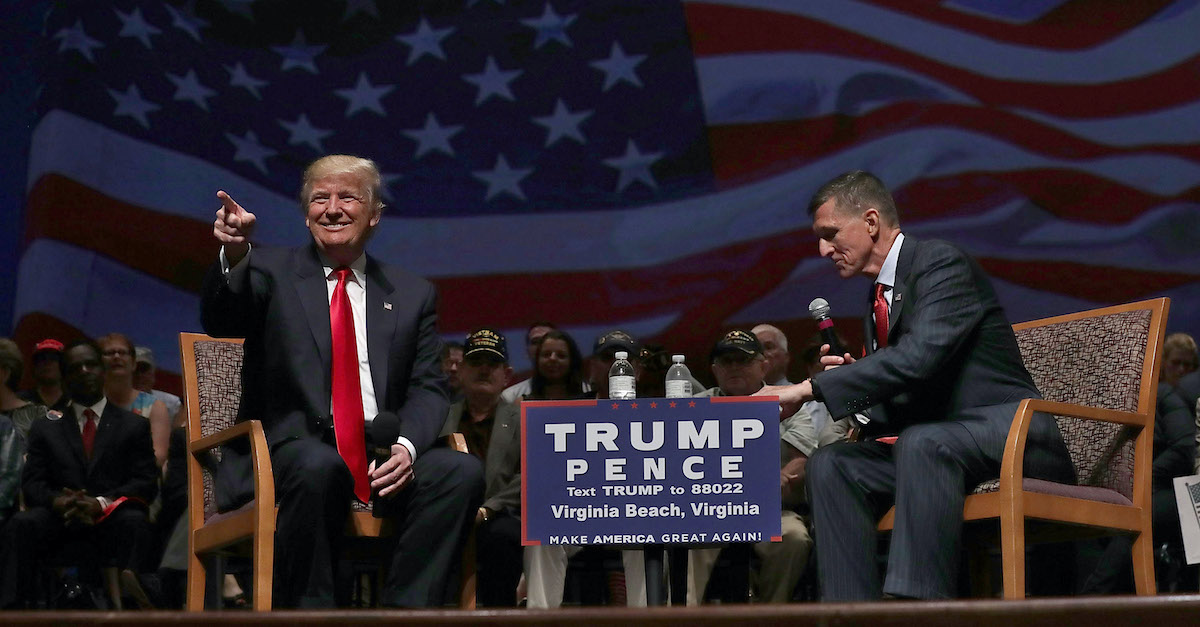 Could President Donald Trump’s tweets on the Michael Flynn case come back to haunt Flynn? Former judge-turned-court-appointed-amicus-curiae John Gleeson argued late Wednesday that U.S. District Judge Emmet Sullivan should absolutely take the president’s comments about the case into account when making a decision about whether or not to grant the Flynn-DOJ joint effort to permanently end the prosecution.

Gleeson filed a roughly two-page supplemental memorandum in response to an inquiry that Judge Sullivan made during Sept. 29’s oral arguments. Gleeson said that Trump’s statements on Twitter have repeatedly been found by the courts to be official statements. Therefore, Gleeson argued, Trump’s statements about the Flynn case are subject to judicial notice as defined in Federal Rule of Evidence 201(b)(2). That rule pertains to judicial notice of adjudicative facts.

Adjudicative facts are “those which concern the parties to some dispute and are helpful in determining the proper outcome in the case.”

Federal Rule of Evidence 201(b)(2) says that a court “may judicially notice a fact that is not subject to reasonable dispute because it […] can be accurately and readily determined from sources whose accuracy cannot reasonably be questioned.” Judicial notice is “used by a court when it declares a fact presented as evidence as true without a formal presentation of evidence. A court can take judicial notice of indisputable facts.”

Gleeson argued that Sullivan should take judicial notice of Trump’s tweets because they may be helpful to Sullivan in determining how to rule on the motion to dismiss. Gleeson was appointed by Sullivan to argue against the dismissal of the case, which he did forcefully on Sept. 29.

Gleeson torched the DOJ for caving to the political pressure President Trump applied. The evidence of that, he argued, is the DOJ’s repeatedly pretextual argumentation in favor of dismissing the Flynn prosecution.

“Ask for the reasons and the factual basis for the reasons,” he said. “And they have to be the real reasons. And [DOJ’s] reasons are so patently pretextual that the government feels the need to keep coming up with more of them. Sometimes, in another setting, there might be a reason to have a factual hearing to determine pretext, but here, it jumps off the record of the case.”

“It’s a gross abuse of prosecutorial discretion,” Gleeson added, saying that President Trump successfully pressured the DOJ to “create a new set of rules that only apply to Michael Flynn and will never apply to anyone else.”

Gleeson suggested that Judge Sullivan lend weight to the president’s tweets on the Flynn case.

“As these courts have recognized, there is no dispute as to the authenticity of the tweets. In fact, it is so well-settled that these tweets are attributable to President Trump that courts have concluded they constitute officials statements in certain contexts,” he said. “Both President Trump and the Government have previously admitted as much.”

“Accordingly, this court may take judicial notice of President Trump’s tweets cited in my Brief for Court-Appointed Amicus Curiae […] and accord them the same weight it would any other statement by the President of the United States,” Gleeson continued.

What tweets is Gleeson talking about? He pointed to the 82-page brief he filed in June, in which he argued that Flynn committed perjury and should be punished for it. On pages 57 and 58 of that brief, Gleeson included the following rundown of Trump’s tweets that he now says Sullivan should certainly take into account when ruling on the motion to dismiss:

President Trump has since engaged in running public commentary about Flynn’s criminal case through the media and on Twitter. In total, he has tweeted or retweeted about Flynn at least 100 times from March 2017 to present. The commentary has made clear that the President has been closely following the proceedings, is personally invested in ensuring that Flynn’s prosecution ends, and has deep animosity toward those who investigated and prosecuted Flynn.

On March 31, 2017, for example, President Trump tweeted that “Mike Flynn should ask for immunity in that this is a witch hunt (excuse for big election loss), by media & Dems, of historic proportion!” In a June 2018 interview, the President offered commentary on the facts of the case: “I feel badly for General Flynn. He’s lost his house. He’s lost his life. And some people say he lied, and some people say he didn’t lie. I mean, really, it turned out maybe he didn’t lie. So how can you do that?” He then made similar comments the next month: “[Y]ou look at Flynn, it’s a shame but the FBI didn’t think he was lying.”

On December 18, 2018, when Flynn was first set for sentencing before this Court, the President tweeted: “Good luck today in court to General Michael Flynn. Will be interesting to see what he has to say, despite tremendous pressure being put on him, about Russian Collusion in our great and, obviously, highly successful political campaign. There was no Collusion!”

In June 2019, Flynn’s former counsel were replaced. In response, President Trump tweeted his approval of one of Flynn’s new lawyers: “General Michael Flynn, the 33 year war hero who has served with distinction, has not retained a good lawyer, he has retained a GREAT LAWYER, Sidney Powell. Best Wishes and Good Luck to them both!”

In March 2020, President Trump tweeted that he was “strongly considering a Full Pardon” for Flynn. On April 29-30, roughly a week before the Government filed its motion to dismiss, President Trump opined that Flynn’s case is a “scam[]” and that Flynn has been “tormented” and “persecuted” by “dirty, filthy cops at the top of the FBI” (as well as certain news outlets). President Trump also stated that these individuals and entities “were trying to force [Flynn] to lie,” mentioning “written statements where they were trying to force him into a position where we can get him on a lie or can we get him this way or that way” — advancing a narrative that the Government now espouses in its motion to dismiss. Compare with ECF No. 198 at 8 n.2, 13-14.

Gleeson then linked those tweets to what he called the “severe breakdown in the traditional independence of the Justice Department from the President”—namely, the DOJ’s motion to dismiss the Flynn case.

On Tuesday, anti-Trump conservative and attorney George Conway derisively touched on the subject of judicial notice in response to a tweet that was not directly related to the Flynn matter. The DOJ, when arguing on matters of national security, has convinced courts before that the president’s statements are not to be trusted. DOJ has made that argument in order to avoid having to hand over documents that may disprove the things the president says.

Under Federal Rule of Evidence 201, moreover, federal judges may take notice of the fact that the president is an idiot and completely nuts. https://t.co/ZheJJ44q5U pic.twitter.com/Sgx3hU7zFN

“Under Federal Rule of Evidence 201, moreover, federal judges may take notice of the fact that the president is an idiot and completely nuts,” Conway said.