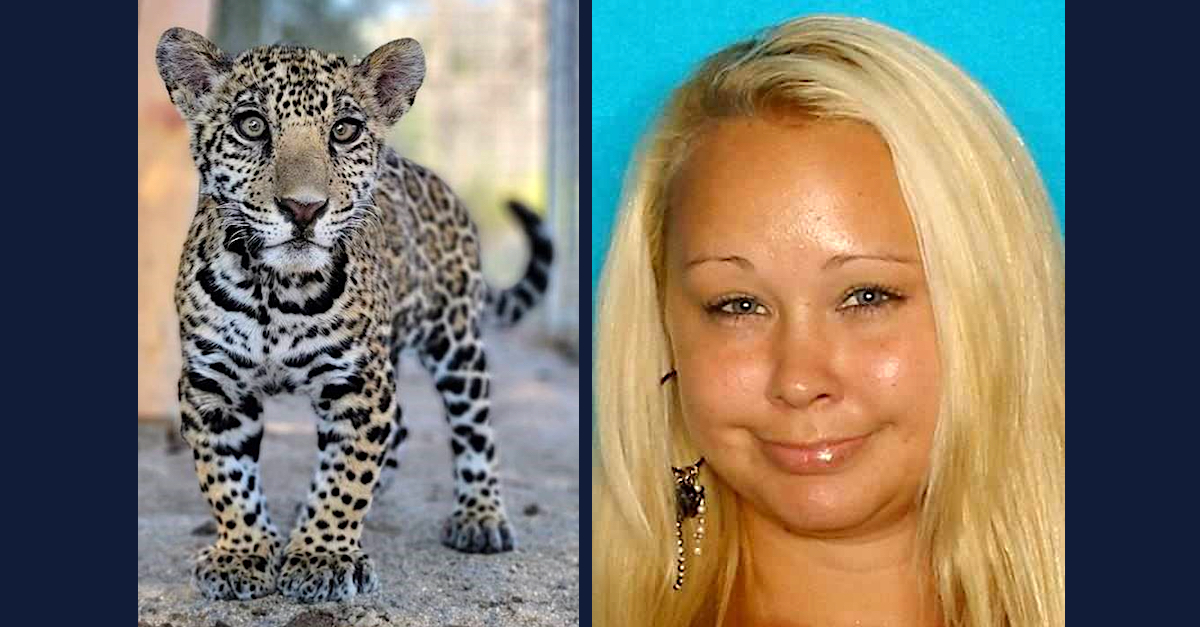 Trisha Denise Meyer, 40, of Houston, Texas, is accused of illegally selling a jaguar cub in California. (Images via the U.S. Attorney’s Office for the Central District of California.)

A jaguar cub abandoned outside an animal sanctuary in California 18 months ago has led to federal felony charges against two people after investigators discovered the endangered exotic cat’s history through Instagram.

Rahman was due a $5,000 discount because of his dissatisfaction over his previous purchase of a marmoset monkey, according to a criminal complaint filed in U.S. District Court.

Meyer’s and Rahman’s $25,000 deal sparked an interstate journey that ended with the jaguar abandoned by friends of a second buyer outside the Lions Tigers & Bears rescue in Alpine, about 30 miles east of San Diego, on Sept. 17, 2021. It also led to a federal investigation aided by sanctuary workers who located Instagram videos of people posing with a jaguar cub with the same spot and whisker patterns.

A scientist with the San Diego Zoo Wildlife Alliance confirmed it was the same animal, according to the complaint, and federal agents interviewed one of the Instagram account owners with his lawyer in January. Identified in the complaint as A.G., the man said another man to whom he rented a home bought the jaguar for about $20,000. That man, identified as H.G., planned to kill the animal because it grew too large and because his wife would soon be giving birth to their baby. However, a friend “convinced him to turn it over to an animal sanctuary,” the complaint says.

The friend told U.S. Fish and Wildlife Service agents he took matters into his own hands by driving the cat to the sanctuary in Alpine with another friend and leaving it in a cage at the building’s entrance. Investigators say they reviewed surveillance video from the sanctuary that showed them leaving the animal on the doorstep.

H.G. denied every owning the jaguar and said it was owned by a “friend of friend” who obtained it from a woman in Texas. However, investigators obtained a search warrant for his iCloud account that showed “numerous photographs and videos of the live jaguar being held and played with by H.G. over many months and consecutive days.”

Prosecutors say the woman is Meyer and the “friend of a friend” is Rahman. Rahman bought the jaguar from Meyer at the Hyatt Regency Hotel in Austin, Texas, while there for a car show in April 2021, paying an extra $1,000 to have it mailed to California. He then sold it to H.G. after he “quickly became dissatisfied” with his new pet.

One man told investigators he was at the hotel with Meyer and Rahman but left when the jaguar “appeared to become very sick and started ‘splatter pooping everywhere.'”

It’s not the only exotic animal the complaint alleges Meyer has sold: In 2020, Rahman bought a marmoset primate from Meyer through an “unknown driver” who handed him the monkey in a small mesh bag in Las Vegas. A man who accompanied Rahman to Vegas told investigators the marmoset was “crazy” and Rahman “was upset because it didn’t appear that the marmoset was a baby, which is what Rahman wanted and paid for.”

“The marmoset was so difficult to care for that they looked for an exotic animal dealer in Las Vegas and ultimately found a pet shop that sold other marmosets,” according to the complaint. “They asked the owner to temporarily take care of the marmoset for them and then they never went back, effectively abandoning the marmoset in Las Vegas.”

Neither has been arrested, but federal prosecutors on Wednesday announced only Meyer was a fugitive. The jaguar now lives at the Lions Tigers & Bears sanctuary.

Read the full complaint and the full indictment below.