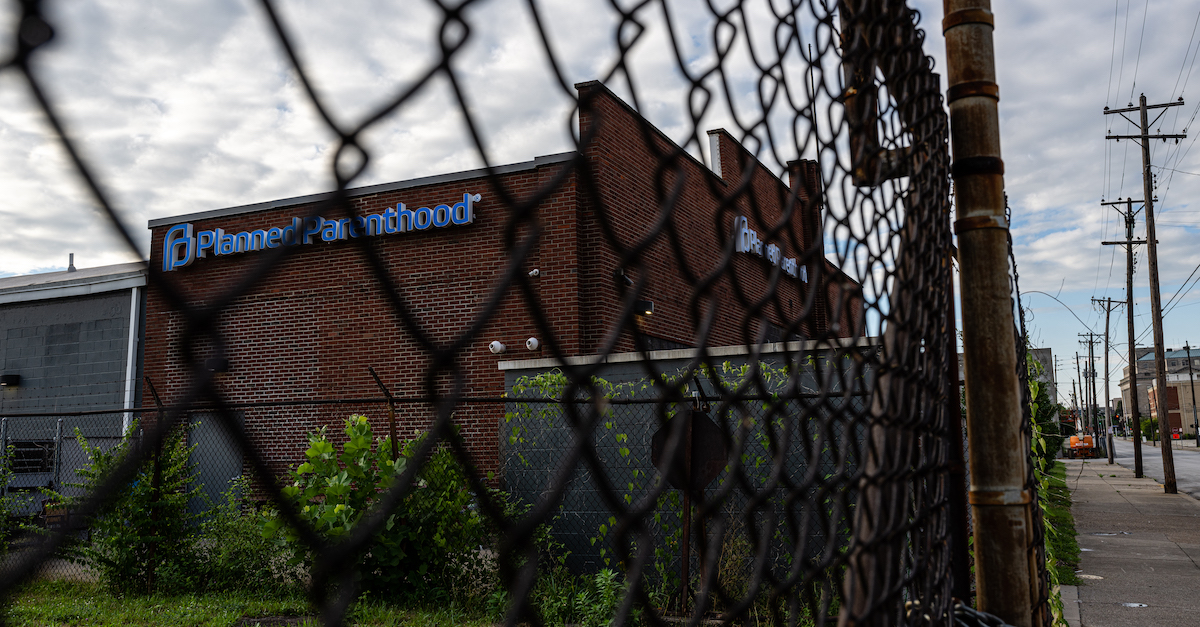 A Planned Parenthood Health Center is seen on July 9, 2022 in Louisville, Kentucky.

A Kentucky judge on Friday extended an order blocking the commonwealth’s abortion bans in the wake of the Supreme Court’s decision overturning Roe v. Wade. Citing testimony by a medical expert, the judge noted that the bans not only affect the decision to terminate a pregnancy — but may lead some to find it too dangerous to become pregnant inside the commonwealth.

In a 20-page opinion and order, Jefferson County Circuit Court Judge Mitch Perry recapped the evidence considered over the course of a hearing earlier this month on two laws designed to ban and severely curtail abortion in Kentucky. One is the so-called trigger ban meant to take effect following the U.S. Supreme Court’s ruling in Dobbs, and the other forbids abortions after six weeks after a patient’s last menstrual cycle, when fetal cardiac activity can be detected.

Another board-certified OB-GYN, Dr. Ashlee Bergin, was not a plaintiff but was called as an expert to help prove “irreparable harm.”

For Perry, Bergin’s testimony succeeded in that regard, being cited in part for extended what was previously a temporary restraining order into an injunction.

“At the July 6th hearing, Dr. Bergin testified about the harms the Plaintiffs will suffer if injunctive relief is not provided,” the order states. “From the time when the Supreme Court’s decision in Dobbs was handed down on June 24th to June 30th when the TRO was granted, EMW turned away almost 200 patients . These patients were denied previously scheduled medical care because of the legal uncertainty that resulted from the Trigger Ban and the Six Week Ban. Some of these women may be able to reschedule their procedures, but others may not. Dr. Bergin testified that EMW has stopped providing abortions after 15 weeks.”

Delays in scheduling and performing an abortion “comes with more serious risks,” the court noted.

The majority’s ruling in Dobbs gutted nearly half-century old precedent in Roe establishing a constitutional right to privacy. Other states’ courts have found that their constitutions go farther in protecting privacy rights than the U.S. Constitution does, and the judge ruled this was also true in Kentucky.

“The right of privacy has been consistently recognized as an integral part of the guarantee of liberty in the 1891 Kentucky Constitution since its inception,” the ruling states. “Kentucky Supreme Court has held that the 1891 Constitution prohibits state action ‘thus intruding upon the inalienable rights possessed by the citizens’ of Kentucky.”

“As defined by statute, the man is at least 50% responsible for the creation of the fetus, yet contrary to the woman, he bears no legal consequences for his contribution,” the order notes. As similarly situated parties to the creation of life, the woman and the man must be treated equal under the law.”

The freedom of religion for those practicing different faiths from Christianity or Catholicism also played a role in the ruling.

“Other faiths hold a wide variety of views on when life begins and at what point a fetus should be recognized as an independent human being,” Perry wrote.

Though “abortion” is not in Kentucky’s constitution, the judge emphasized that does not end his analysis.

“The Court here is tasked not with finding whether the Kentucky Constitution explicitly contains the right to an abortion , but rather with discerning whether the laws at issue constituting near total bans on abortion violate the rights of privacy, self-determination, equal protection, and religious freedom guaranteed by the Kentucky Constitution,” the ruling states.

As noted by the judge, the law seeking to ban abortions after six weeks could implicate not only the decision to terminate a pregnancy — but also “undercut a woman’s choice to have children at all.”

“Many people are justifiably concerned about having children now due to a very real fear around many of the complications that may arise during the pregnancy,” as outlined by Dr. Bergin in her testimony. Women have legitimate concerns about their ability to receive adequate care, and the possibility their health and safety will be deemed subordinate to the life of a fetus. Already, laws similar to the ones at issue here, are creating confusion and concern in healthcare settings as doctors, in order to avoid incurring civil and criminal liability, are forced to wait until women are in dire medical conditions before interceding.”

The judge cited the New England Journal of Medicine’s study of that issue, titled “A Preview of the Dangerous Future of Abortion Bans — Texas Senate Bill 8.”

A representative for Kentucky Attorney General Daniel Cameron (R), the lead defendant in the lawsuit, did not immediately respond to Law&Crime’s email requesting comment.