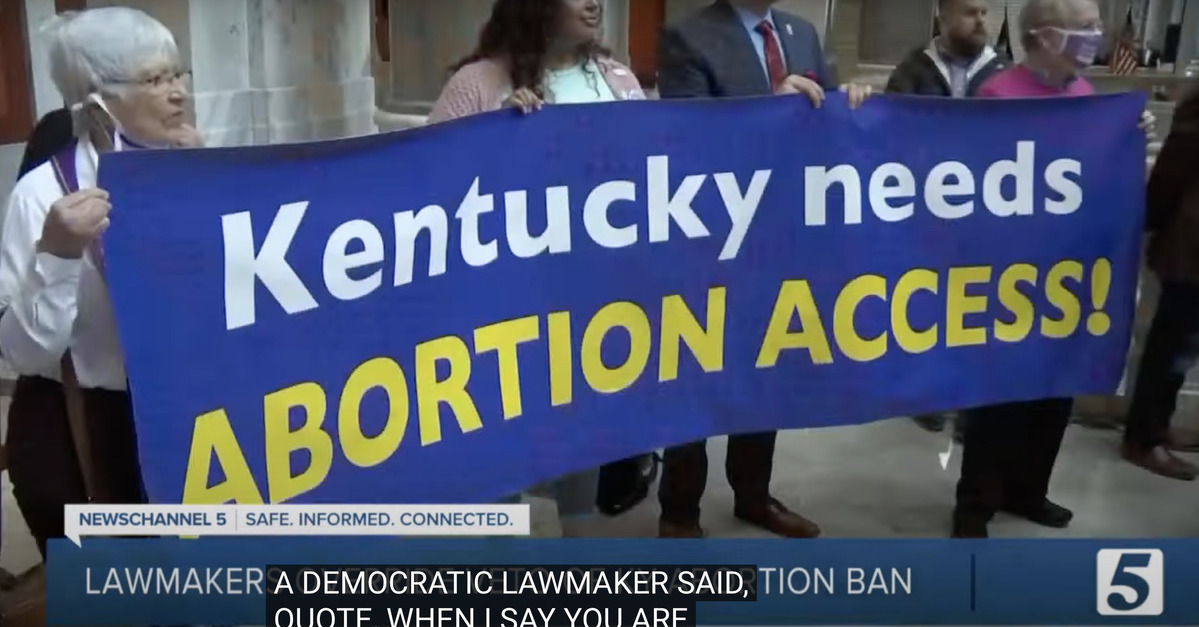 Individuals hold a banner at the Kentucky statehouse after the state legislature overrides the veto of H.B. 3.

Kentucky’s House Bill 3 bans all abortions after 15 weeks of pregnancy, bans the the distribution of abortion pills by mail, raises standards for minors seeking an abortion, and creates new certification and monitoring standards for tracking the details of abortions performed within the state. It also requires that fetal remains be cremated or interred after an abortion is performed (a complex and costly procedure for clinics) and prohibits telehealth visits for medication abortions. Further, it directs the state medical board to revoke the license of any physician who violates the law.

The bill includes an exception if an abortion is necessary to protect a woman’s own life, but it does not include any exception for cases of rape or incest.

Not only does the bill contain unusually restrictive measures, but it also implements them on an “emergency” basis. The emergency designation means that the bill took effect immediately upon Beshear’s veto being overridden by the legislature.

The ACLU made good on its earlier promise to challenge the law in court and asked for an immediate injunction.

“The government should never have the authority to force a person to remain pregnant against their will,” the ACLU tweeted.  “To the extreme politicians who banned abortion care:  we’ll see you in court.”

FILED: We filed our challenge to #HB3 in US District Court this morning.

The government should never have the authority to force a person to remain pregnant against their will.

To the extreme politicians who banned abortion care: we’ll see you in court. https://t.co/eyzTGpCHj7

In the lawsuit filed in federal district court in Kentucky, the ACLU asked for a temporary restraining order which would block the law from taking effect until the underlying constitutionality of the legislation can be determined by a court. The case argues that H.B. 3 violates the constitutional rights of women by placing an undue burden on their fundamental right to access an abortion.

Because of the Act, Plaintiffs have been forced to turn away patients in need of abortion and suspend the provision of those services indefinitely. If relief is not granted urgently to restore abortion access in Kentucky, the consequences will be dire: patients will be forced to attempt to travel out of state for care, if they are able to scrape together the resources, or they will be forced to remain pregnant against their will.

Brigitte Amiri, deputy director of the ACLU Reproductive Freedom Project said in a statement that “HB 3 would completely and immediately eliminate abortion access in Kentucky by piling on a laundry list of unnecessary abortion restrictions that are impossible for providers to comply with because the Commonwealth has not yet set up the mechanisms for complying with the law.”

Amiri continued by arguing that if the law is not immediately blocked, racial minorities, low-income individuals, and those residing in rural areas will be especially disadvantaged.

“The reality is that if the law isn’t blocked, some pregnant people in Kentucky will be forced to remain pregnant at great physical, emotional, and financial cost to them and their existing families,” Amiri said.

“These unnecessary requirements would force providers to immediately stop offering abortion in KY. Everyone should have the right to control their own lives and bodies — that includes abortion,” Planned Parenthood tweeted after the veto override.

We’re going to court to block Kentucky’s unconstitutional abortion restrictions. These unnecessary requirements would force providers to immediately stop offering abortion in KY. Everyone should have the right to control their own lives and bodies — that includes abortion. pic.twitter.com/Bdm7x0fkDe

Make no mistake: the Kentucky Legislature’s sole goal with this law is to shut down health centers and completely eliminate abortion access in the state. But we haven’t lost hope — we’re getting to work. Trust us when we say that we will do everything in our power to stop this insidious law from preventing Kentuckians from accessing the vital, time-sensitive health care they need and deserve. We are confident that the courts will stop this cruel and unconstitutional omnibus. Everyone deserves to make their own decisions about their bodies, lives, and futures.

The Kentucky lawmakers’ votes on H.B. 3 came just one day after Oklahoma Gov. Kevin Stitt (R) signed Senate Bill 612 into law. Oklahoma’s legislation will take effect in August. S.B. 612 allows abortions only when they are necessary “to save the life of a pregnant woman in a medical emergency.” The law also subjects anyone performing an abortion to felony penalties of up to 10 years in prison.

These harsh new measures adopted by Kentucky and Oklahoma have been called out for constituting an unconstitutional restriction on reproductive rights guaranteed by the United States Supreme Court in Roe v. Wade and subsequently affirmed by Planned Parenthood v. Casey.

Know that Roe v. Wade is still in effect, abortion is legal in America, and we can never stop fighting for women’s health and rights.

I grew up in Oklahoma when abortions were illegal.

We cannot go back.

But an extremist Supreme Court has enabled Republicans to pass clearly unconstitutional bans on abortion. I won’t stop fighting to protect Roe with the Women’s Health Protection Act. https://t.co/RaJSqb9kAu