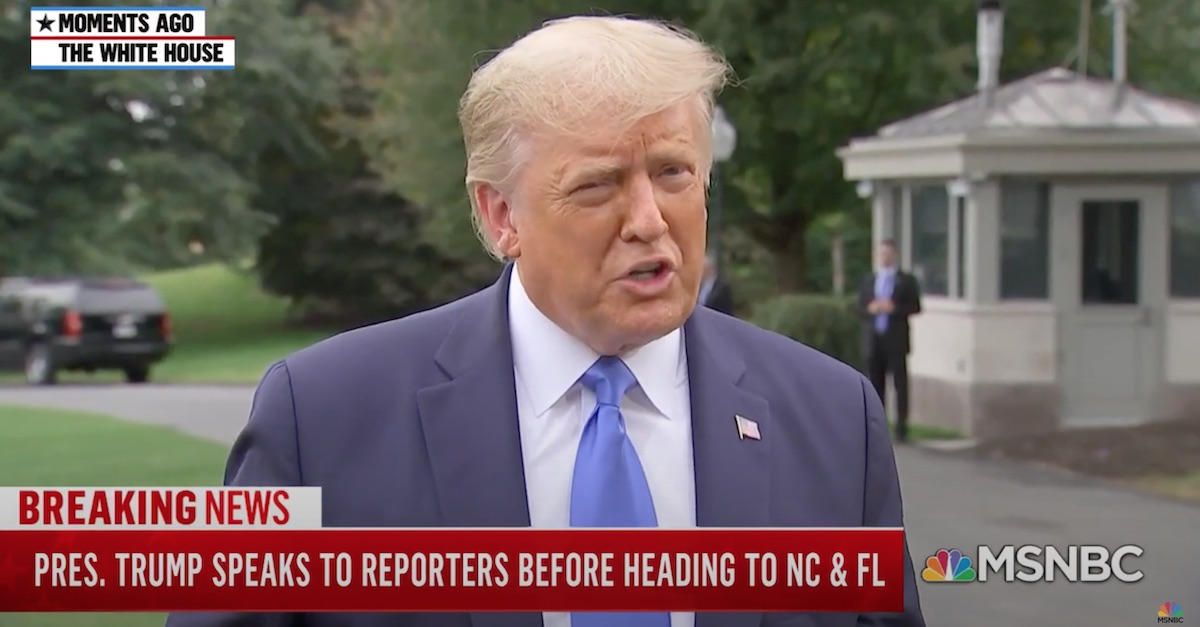 The U.S. Attorney’s Office for the Middle District of Pennsylvania on Thursday announced that federal authorities had recovered a handful of previously discarded mail-in ballots from members of the military. In an unusual statement, the Department of Justice (DOJ) initially claimed that all nine of the recovered ballots “were cast for presidential candidate Donald Trump” But minutes after Trump touted the findings as “evidence of a whole big scam” to a gaggle of reporters at the White House, the department partially walked back its announcement to say only seven of the nine ballots were cast for the sitting president.

According to both the initial and revised statement from U.S. Attorney David Freed (R), the Federal Bureau of Investigation (FBI) opened an inquiry on Monday into possible issues with “a small number of mail-in ballots” in Luzerne County at the behest of District Attorney Stefanie Salavantis. The FBI, in conjunction with state police, followed up on the request by gathering physical evidence and conducting witness interviews, eventually recovering the discarded ballots.

“At this point we can confirm that a small number of military ballots were discarded. Investigators have recovered nine ballots at this time. Some of those ballots can be attributed to specific voters and some cannot,” read both statements.

But that claim proved premature, as the newly revised statement said only seven of the ballots were cast for Trump.

“Of the nine ballots that were discarded and then recovered, 7 were cast for presidential candidate Donald Trump. Two of the discarded ballots had been resealed inside their appropriate envelopes by Luzerne elections staff prior to recovery by the FBI and the contents of those 2 ballots are unknown.”

Both statements concluded by saying the investigation into the discarded ballots remained ongoing and declared that it is “the vital duty of government to ensure that every properly cast vote is counted.”

Justin Levitt, a law professor at Loyola Law School in Los Angeles and former DOJ attorney, said that while an investigation into the discarded ballots may be warranted, there was no legitimate reason for the announce unconfirmed facts or identify the candidate for whom the ballots were cast.

An investigation here may be reasonable. But there is NO legit reason for:

1) a DOJ press release on a pending investigation, that
2) announces a partial list of unconfirmed facts, including
3) the identity of one of the candidates on specific ballots.https://t.co/T92nz8tZpV

“If the US Attorney wants to work for a campaign, he’s welcome to do so, just as soon as he resigns. Which should be immediate,” Levitt added, also pointing out how Freed’s statement violated DOJ guidelines on making statements about ongoing investigations.

From the DOJ's own guidelines, last revised in 2017, during _this_ Administration:https://t.co/b59f3cax3M pic.twitter.com/xHxpKhepzg

Speaking to reporters on the White House lawn Thursday afternoon, President Trump utilized the U.S. Attorney’s initial statement when answering a question about whether he will only consider the presidential election results to be legitimate if he wins.

“We have to be very careful with the ballots – the ballots – that’s a whole big scam,” he responded. “You know they found I understand eight ballots today in a wastepaper basket in some location. They found – it was reported in one of the newspapers that they found a lot of ballots in a river. They throw them out if they have the name Trump on them I guess.”

Trump and Attorney General Bill Barr have both consistently pushed false and debunked conspiracy theories regarding the security of mail-in voting. Interestingly, there was a pretty clear difference between the Luzerne County District Attorney’s Office statement of confidence on Tuesday that election integrity would not be impacted and the U.S. Attorney’s Thursday statement(s).

Why that DOJ press release announcing inquiry into ballot "issues" was so bizarre. Compare DOJ's announcement, touting ballots cast for Trump, vs. the District Attorney stressing confidence that issue will be resolved in a way that won't impact election https://t.co/0FyI7Tb4A0 pic.twitter.com/40cN2ssNJE

Rudy Giuliani, the president’s attorney and staunch ally, also took the original statement and ran with it. He said it was proof of rampant fraud committed by Democrats.