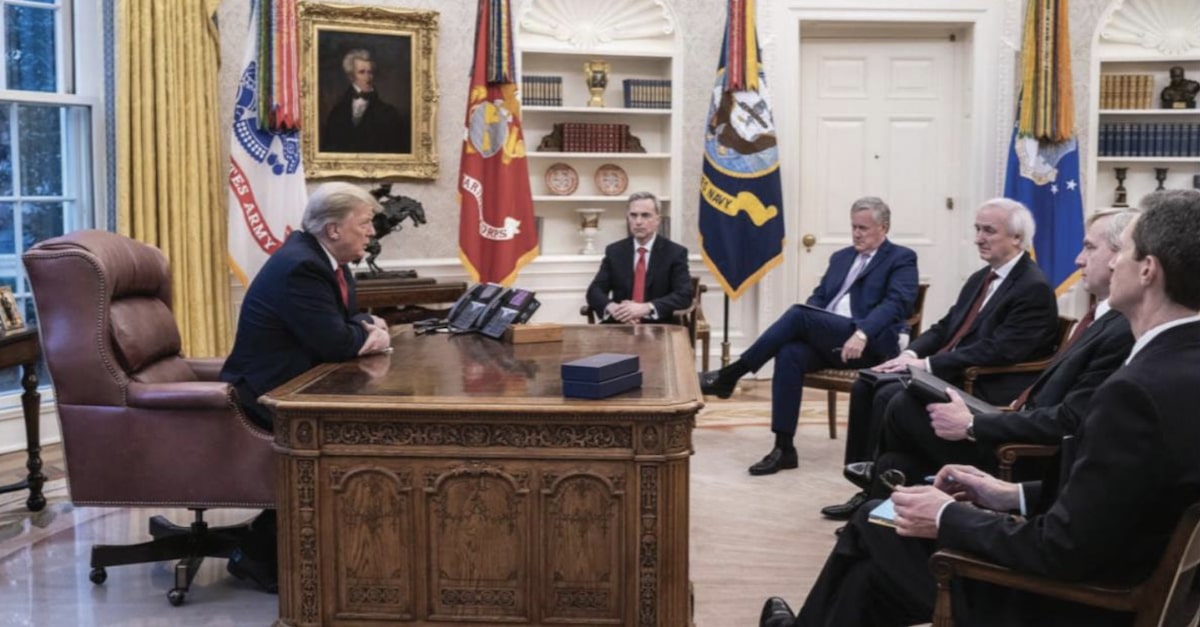 This photograph, found in a 394-page Senate Judiciary Committee report on Trump’s efforts to pressure the Justice Department to topple the 2020 election results, is captioned in that report as “Meeting with DOJ leadership, December 31, 2020 | Photo courtesy of the White House.”

A high-ranking Justice Department official became “Trump’s Big Lie lawyer” in a weeks-long quest to topple the 2020 election results that lasted from former Attorney General Bill Barr’s resignation through the Jan. 6 assault on the U.S. Capitol, the Senate Judiciary Committee found in a 394-page report on Thursday.

In announcing the report titled “Subverting Justice: How the Former President and His Allies Pressured DOJ to Overturn the Election,” the committee filed a formal complaint against that lawyer, former Acting Civil Division Assistant Attorney General Jeffrey Clark, to the D.C. Bar for an investigation into his “compliance with applicable rules of professional conduct.”

“These rules include Rule 1.2, which prohibits attorneys from assisting or counseling clients in criminal or fraudulent conduct, and Rule 8.4, which among other things prohibits conduct that seriously interferes with the administration of justice,” the committee wrote in a press release. “The Committee is withholding potential findings and recommendations about criminal culpability until the investigation is complete.”

Releasing a flood of hundreds of pages of reports, transcripts and exhibits, the Democratic-dominated committee characterizes former President Donald Trump’s actions as potentially criminal. The committee described the report as interim findings, and the senators indicated they would release recommendations for “criminal culpability” after the report is complete.

“How Close We Came to a Constitutional Crisis”

“Thanks to a number of upstanding Americans in the Department of Justice, Donald Trump was unable to bend the Department to his will,” Durbin said in a statement. “But it was not due to a lack of effort. Donald Trump would have shredded the Constitution to stay in power. We must never allow this unprecedented abuse of power to happen again.”

In a floor speech to Congress, Durbin added that the United States was a “half-step away” from that outcome.

The six key findings of the report characterize Trump’s conduct as a potentially criminal violation of the Hatch Act, which prevents anyone—”including the president”—from commanding federal employees from engaging in political activity.

“President Trump repeatedly asked DOJ leadership to endorse his false claims that the election was stolen and to assist his efforts to overturn the election results,” the report’s first finding states. “Beginning on the day former Attorney General William Barr announced his resignation and continuing almost until the January 6 insurrection, Trump directly and repeatedly asked DOJ’s acting leadership to initiate investigations, file lawsuits on his behalf, and publicly declare the 2020 election ‘corrupt.’ Documents and testimony confirm that Rosen, and in some cases other senior DOJ leaders, participated in several calls and meetings where Trump directly raised discredited claims of election fraud and asked why DOJ was not doing more to address them.”

“After personally meeting with Trump, Jeffrey Bossert Clark pushed Rosen and [Acting Deputy Attorney General Richard] Donoghue to assist Trump’s election subversion scheme—and told Rosen he would decline Trump’s potential offer to install him as Acting Attorney General if Rosen agreed to aid that scheme,” the report’s third finding states. “Clark pushed Rosen and Donoghue to publicly announce that DOJ was investigating election fraud and tell key swing state legislatures they should appoint alternate slates of electors following certification of the popular vote. He did so following personal communications with Trump, including at least one meeting that Clark attended in the Oval Office without the knowledge of DOJ leadership.”

Clark might not be the only official potentially facing blowback for his participation in Trump’s election-overturning scheme. Another section of the report implications members of the “Stop the Steal” movement in the effort—and names names.

Among this group, the senators list Rep. Scott Perry (R-Penn.), who objected to the certification of the Keystone State’s vote and acknowledged introducing Clark to Trump; state senator Doug Mastriano, a Republican from Pennsylvania who welcomed Giuliani’s purported fraud hearing and spent thousands of dollars from his campaign account to bus people to the January 6 “Save America Rally”; and Trump’s legal advisor Cleta Mitchell, who participated in the call where the former president urged Georgia Secretary of State Brad Raffensperger to “find 11,780 votes” to tip the election in his favor.

The 45th president appeared to refer to Pak as a “never-Trumper” in a taped phone call with Raffensperger on Jan. 2 this year.

By “order of the president,” Trump replaced Pak two days later with then-U.S. Attorney Bobby Christine. Though this sequence of events was previously known, the Senate’s report reveals that Trump told Acting Deputy Attorney General Donoghue that he had high hopes that Christine would “do something” about his bogus fraud claims.

During his closed door testimony, Donoghue agreed that Trump told him “something to the effect of” the following quote: “I’ve heard great things about Bobby Christine, and if I put him in, he’ll do something about it.”

Those hopes would be dashed: Christine also subsequently resigned within less than a month, but the committee says the Trump Justice Department’s conduct generally in the affair was not a picture of independence and integrity.

“By pursuing false claims of election fraud before votes were certified, DOJ deviated from longstanding practice meant to avoid inserting DOJ itself as an issue in the election,” the committee wrote in its final finding.

(Photo from the Committee’s Report)