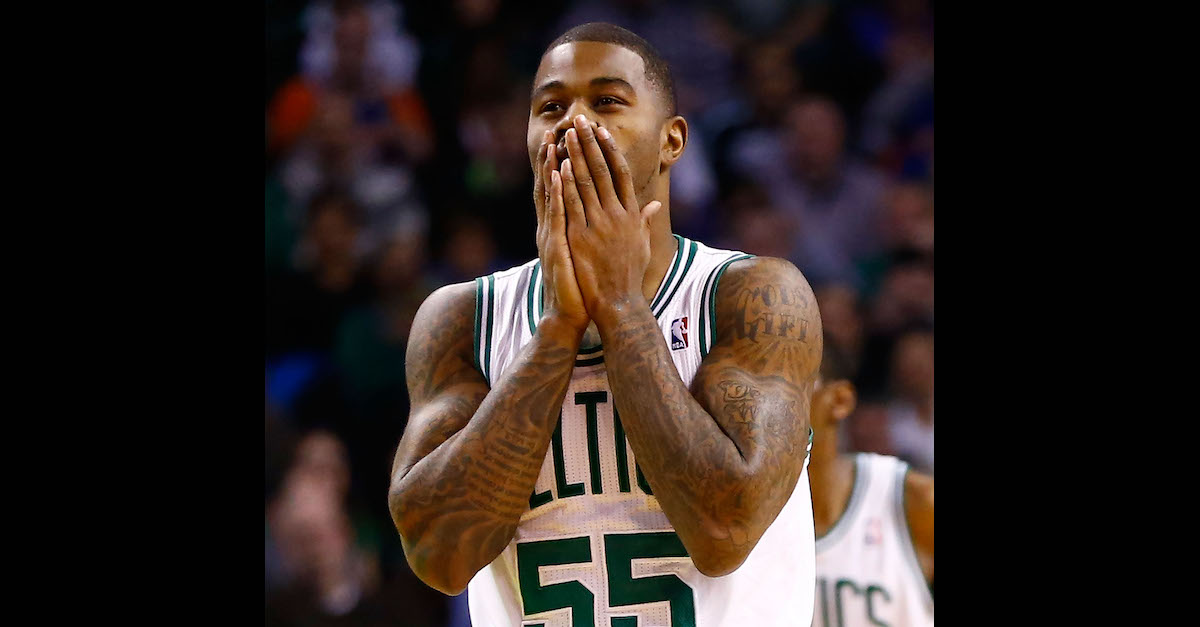 Terrence Williams, then of the Boston Celtics, reacts after being called for a foul against the New York Knicks during a game on March 26, 2013 at TD Garden in Boston, Massachusetts.

Federal prosecutors in the Southern District of New York on Thursday morning announced an indictment against 19 people — 18 former NBA players and the spouse of one player — for allegedly cheating the league’s health plan out of nearly $4 million. The indictment alleges two counts: (1) conspiracy to commit health care fraud and wire fraud and (2) aggravated identity theft.

“TERRENCE WILLIAMS, the defendant, orchestrated the scheme to defraud the Plan,” the indictment alleges. The document says the defendants “engaged in a widespread scheme to defraud the Plan by submitting and causing to be submitted false and fraudulent claims for reimbursement of expenses for medical and dental services that were not actually rendered.”

The indictment describes Williams as the ringleader: “WILLIAMS recruited other Plan participants to defraud the Plan by offering to supply them with false invoices to support their false and fraudulent claims to the Plan in exchange for the payment of kickbacks to WILLIAMS.”

It further says Williams “provided” a list of other defendants with “false provider invoices to support their false and fraudulent claims that described medical and dental services that were not in fact provided.” It goes on:

WILLIAMS also assisted DAVIS, WATSON JR., and WRIGHT in procuring fraudulent letters of medical necessity to justify some of the purported medical services that were the subject of fraudulent invoices. In addition, in furtherance of the scheme, WILLIAMS impersonated an individual who processed Plan claims. In return for his provision of false supporting documentation for their fraudulent claims, many of the defendants paid WILLIAMS kickbacks, totaling at least approximately $230,000.

The document says the allegedly fraudulent reimbursements involved a chiropractic office, two dental offices, a “wellness office” that “advertised its specialties in sexual health, anti-aging, and general well- being in Washington State,” several doctors, an “Administrator Manager” employee of one of the offices, and two associates of Williams “who assisted . . . in creating fabricated . . . invoices.” The precise identities of these offices, doctors, etc., are not named.

The documents allege that in Nov. 2017, Williams “submitted false and fraudulent claims” to the NBA’s Health and Welfare Benefit Plan for an alleged $19,000 in chiropractic care. The plan paid $7,672.55 back to Williams. The scheme allegedly spiraled from there:

For example, on or about May 28, 2019, CC-1 [an alleged conspirator] emailed WILLIAMS a template for a fraudulent invoice designed to appear as if it had been issued by CHIROPRACTIC OFFICE-1, when it was not. In addition, on many other occasions, CC-1 sent emails to WILLIAMS attaching fake CHIROPRACTIC OFFICE-1 invoices bearing the names of co- conspirators for WILLIAMS to review before the fake invoices were finalized.

In or about May 2019, CC-2 created fake CHIROPRACTIC OFFICE-1 invoices for RONALD GLEN DAVIS, CHARLES WATSON JR., and ANTOINE WRIGHT, the defendants, and emailed them to WILLIAMS. On or about May 3, 2019, CC-2 sent an email to CC-2’s self that attached a template for a fake CHIROPRACTIC OFFICE-1 invoice that had the date, invoice number, services, and charge of $15,000 filled in; however, the “bill to” box, where the name of the patient would ordinarily be found, was’ blank.

The plan began asking for “letters of medical necessity . . . from a primary care physician on official letterhead” to back up the claims. Those letters were allegedly faked.

It also says Anthony Allen “repaid $350,075 of the $420,075 he owed the Plan” for two separate fake claims after he was asked to return the money. Several others — Telfair, Anderson, and Brown — “did not make any repayments to the Plan” when caught.

The documents also allege that Smith’s scheme was rather easy to debunk. He claimed to have “received IV sedation and endodontic therapy (i.e., root canals) and crowns on eight teeth at DENTAL OFFICE-1 in Beverly Hills, California for $47,900” on Dec. 20, 2018. But Smith flew from Los Angeles to Taipei, Taiwan, “on or about October 31, 2018” and returned on Dec. 31, the indictment says. He “played in basketball games in Taipei on December 16, 2018 and December 21, 2018,” the document also says.  He claimed he had the multiplicitous dental procedures in the middle of the time frame he was actually documented engaging as an athlete overseas, the indictment indicates.

Davis similarly claimed to have received “crowns on eight teeth” in Los Angeles on Oct. 2, 2018. Prosecutors also say those alleged services were easy to contradict:

The indictment lays out 32 pages of allegations. Read it here:

Editor’s note: this article began as a short breaking news report. It has been substantially updated.